Unacceptable conduct is still unacceptable even under the guise of satire 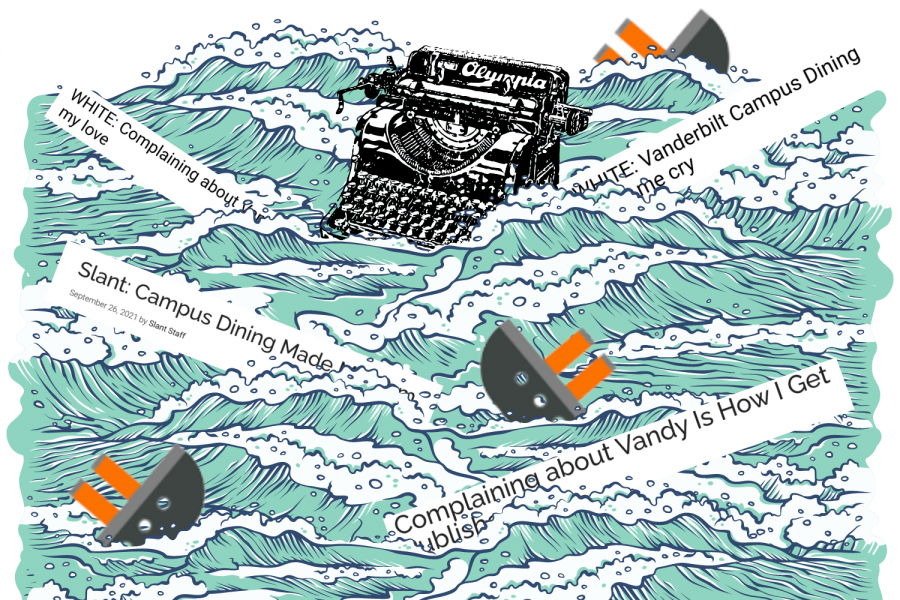 Under the guise of humor, The Slant seems to be able to do anything they want. (Hustler Staff/Alexa White)

UPDATED: The two articles referenced in this piece were removed by Slant Editorial Staff on Jan 5.

Before I begin, I want to clarify something. I absolutely recognize that The Slant is made up of my peers. I am not here to attack anyone nor the organization. I am here to share my story, in hopes that doing so reveals some of the issues I have faced behind the scenes as a college journalist.

I feel I have a duty to share these thoughts and experiences and through many weeks of contemplating publishing this article, I have finally published it. I decided that I was done being quiet and passive as a group I had no control over continued to do harmful things with few repercussions.

I never expected one of the most successful pieces I wrote for The Hustler during college—a story about the dining situation—to be satirized using sexually explicit language. I never expected that one of the most singled out and uncomfortable I have ever felt would be during an interview for a campus club whose mission is to make students laugh. I never thought I would hear about my friends being accosted while they walk across campus by a registered campus organization. I never thought I would have a second article of mine satirized calling me, “a student with too much time” and calling my articles “bullshit.”

This isn’t about a supposed friendly rivalry between The Slant and The Hustler. There is a long history of harmless banter between the two groups, devoted to two very different sectors of journalism. The two groups have co-existed on campus for years; engaging in playful mockery and back-and-forth discourse to make campus journalism interesting.

I’d like to make my opinion clear. I don’t hate The Slant.

This also is not about a personal grudge I have against satire. There is so much value in humor and commentaries that explore the humor in news and that question the ways that we experience the world we live in.

But some of the things I have seen The Slant do recently are not satire, they are personal.

I decided to apply to The Slant because I loved the idea of writing light funny articles. There are a lot of articles on their website that are wildly funny and despite their satirical intent, start important conversations on campus. I love writing, especially when there are few parameters and I get to be creative. I wanted to cross the divide between satirical and formal journalism on campus and find a new writing community. I wanted to connect with Vanderbilt events and campus in a new, fun way. Notably, I was also experiencing the effects of a long year of isolation and was seeking a creative outlet.

I spent a while on my application. I got an interview slot. February 23. The interview consisted of questions I was told were to “feel out vibes” and see if I “would fit well within… (their) current staff” as reported by the email I was sent to announce I had been offered an interview. On the day of the interview, I logged onto Zoom and faced two members of The Slant’s executive board.

I have never felt as uncomfortable as I did during that interview.

I was asked sexually charged questions. My interviewers looked up my Instagram account during the interview. Someone close to me was disrespected and made fun of by one of my interviewers for their military affiliation.

I am not asking if this would make you uncomfortable. I am saying that this made me uncomfortable. No other organization would be allowed to ask or say these things in an interview, why should The Slant?

After the interview, I was very upset. It was a relief when I received a respectful email later that week reporting that I did not get selected as a staff member. It was clear to me that I would not “fit well within…[their] current staff.”

I don’t remember who sent me the article first. It was more than one person, concerned about how I felt reading my favorite article I had ever written for the Hustler inappropriately satirized by The Slant. The article published is a direct, almost sentence by sentence, ‘satire’ of my piece.

As it made its way around campus, I began to get a few texts asking me how I felt after reading it. Initially, I went back and forth trying to rationalize my discomfort. I had decided to think of the satirical piece as something that created discomfort but was out of my control. I didn’t want it to reflect badly on me to employers or family members. I didn’t want it to exist in the first place and felt uncomfortable with its direct connection to me—their article links directly to my article with my name and bio attached to it.
I am an education major. I do not want to be looking for teaching jobs while my article is linked to something containing sexually explicit language. I do not want my students to find the Slant piece and think that I wrote it.
I considered reaching out to the author of the piece but the article was attributed to “Slant Staff.” It is unclear to me if that means everyone on staff contributed to the piece or if the author wished to remain anonymous, but it is frustrating nonetheless. The Slant is hiding under the umbrella that anonymity offers.

When I write for the Hustler, I cannot be anonymous. I do not have the luxury of posting this article without hearing people talk about me and the fact that I wrote it. Whatever discussion and pushback I receive due to this piece will all tie back to me, because it’s my name at the top. By publishing satire under the title “Slant Staff” they avoid any retribution that attaches their actions to their words.

I wish that the “Slant Staff” had taken a step back to look at their positionality as an anonymous body writing sexually explicit content to piggyback off of my hard work.

I am not sure if this was supposed to satirize blood drives, or if this was just something funny that the staff thought of doing to get publicity.

I also do not know exactly how to define when they crossed the line.

According to uncomfortable students passing by the booth, the line had certainly been crossed. Booths at Rand are known for their aggressive tactics to getting student sign-ups, but it is different when sexual comments are called out to passersby. A harmless school tradition to promote engagement became uncomfortable. Various friends of mine reported that they were accosted for “donations” as they walked past the booth, even as they bowed their heads to avoid being spoken to. Implicating strangers who were trying to evade the situation is not okay.
I am not asking if this would make you uncomfortable. I am saying that this made students uncomfortable.
The situation was made more uncomfortable by the Instagram posts I saw after the Booth fiasco. The Slant had posted an edited version of their trifold board that claimed that the “Cum Drive” event was hosted by the Hustler and attempted to implicate an uninvolved group in this sexually charged “joke.” This post has since been removed and I have been informed that action was taken to address the harm that this event has caused.

This isn’t a call for the end of The Slant. Satire has a purpose: to drive conversation around topics in a sometimes lighter and more approachable manner. I don’t believe that any of these experiences reflect those ideals. Satire is all about punching up. The Slant should be making fun of administration and poking fun at their policies, or just being funny without having to be overtly sexual.

There are so many articles on the Slant website that are gems:  “Card Services to Begin Charging For All Swipes” and “Oops, I spent all your Dance Marathon donations on Premium Snapchats” and “Why I’m Stepping Down As Slant Editor-in-Chief and Stepping Up As Dean Of Students.” However, there needs to be a larger discussion by The Slant when they decide to implicate other students in their more sexually charged activities.

What I want is to be asked for permission. I wish I knew that the interviewers would have asked me questions about my sex life, I would have declined the offer for an interview. I wish I was asked if it was okay to write a satirical version of my article, I would have felt more included in the process and less blindsided. I wish that the booth at Rand wall the other day had either a different theme and idea entirely or that they waited for engagement before yelling out to unengaging students.

Satire is all about uniting over a common grievance and poking fun at it. The Slant does a great job at poking fun at the administration and campus quirks.

I don’t hate The Slant; but I wish their content made me laugh, instead of compelling me to write an article. No other organization on campus would be able to host this type of event without significant outrage.

I wrote the above on November 13th. It went through edits and it almost got published. I stepped back in fear of retaliation from members of The Slant.

But on Dec 4, I got messages from people asking if I was okay. There was a new Slant article and it was a personal attack.

The piece also claims that my writing articles, which they describe as “poorly edited” and “bullshit” must mean I’m extremely self-obsessed. This trope is all too common for female-identifying writers. While nowhere near as extreme as what some female-identifying journalists face when writing for professional news organizations, it is extremely common to see women facing people attempting to discredit their writing on the basis of gender.

I am publishing this because the retaliation I feared happened already, even though I didn’t publish the article originally. Now it is personal.
I want to be able to tell my future students or children that I stood up for myself rather than continue to let this happen to other writers in the future.
It would be really easy to write me off as a “young, sensitive female liberal.” But if I may speak directly to the Slant staff:  Take me seriously. Stop sexualizing my journalism that I am proud of. Stop linking my content to yours. Stop publishing things anonymously. Stop punching down and writing sexual content about a female’s opinion articles. Stop thinking that the guise of humor protects you from doing harmful things.

I would appreciate it if The Slant deleted both of the articles targeting my work and put more thought into articles that reference their peers’ work in the future. I hope The Slant talks about this article in a meeting; but that instead of planning a satire of it, they take me seriously and think about ways to operate that do not negatively affect their peers and instead provide a much-needed spot of humor and levity at our university.

Everything I have revealed above is not okay; it doesn’t become okay under the guise of satire.