The Commodores, who are coming off of wins over Hawai’i and BYU, will look to extend their winning streak to four against the Razorbacks on Tuesday. 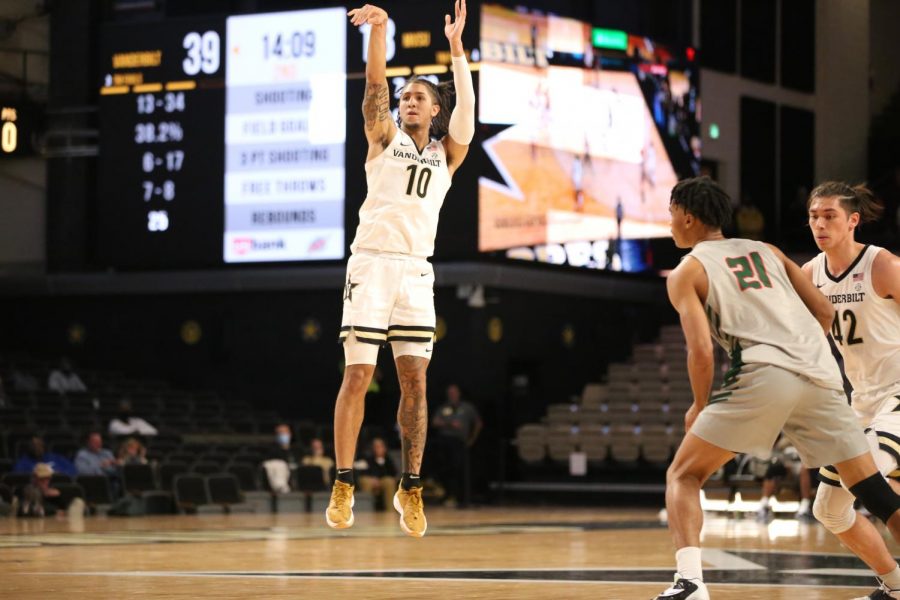 On Tuesday, the Vanderbilt Commodores (8-4) will take on the Arkansas Razorbacks (10-3) in their first game against an SEC opponent this season. The Commodores have momentum going into this game after winning the Diamond Head Classic, while the Razorbacks are in need of a victory after losing three of their last four games.

“Looking back at it, we had the fifth toughest nonconference schedule [among SEC teams],” head coach Jerry Stackhouse said during his media availability on Monday. “I think that lets us know that we scheduled the right way and did things to try and prepare for the season. We’ve got some good momentum.”

The matchup will feature the SEC’s two leading scorers, Scotty Pippen Jr. of Vanderbilt (18.1 points per game) and JD Notae of Arkansas (18.0 points per game). Both teams are certainly dependent upon their best players, as past games have indicated. In Vanderbilt’s narrow 69-67 win over BYU, Pippen Jr. took over, scoring the team’s last 16 points and coming up with the game-clinching steal with just over a minute remaining.

Arkansas’ performance as a team also rests on the shoulders of their star guard. In their 88-66 loss to Oklahoma, Notae contributed only 13 points while shooting 3 for 14 from the field. Notae was out due to a non-COVID-19 related illness in the Razorbacks’ 13-point loss against Mississippi State on Wednesday. Not only did Arkansas miss his abilities on the offensive end, but they also could’ve used his defensive contributions: the senior is averaging 2.7 steals per game, which leads the SEC.

As any casual basketball fan knows, though, one player can’t do it all. While Vanderbilt may need a big contribution from Pippen Jr. on Tuesday, they’ll need their role players to step up as well.

“We play a style where we share a floor, and guys are going to get opportunities,”Stackhouse said.

Unfortunately for Vanderbilt, many of the Commodores’ role players are battling small injuries. Stackhouse mentioned that despite the break the team has had—they haven’t played since Dec. 23—they’re still dealing with a number of injuries.

“We’ve come back a little more banged up than we were when we left, which is a little strange,” Stackhouse said. “We were thinking that we’d have time for guys to heal up a little bit.”

The head coach explained that while only one unnamed player had COVID-19 issues over the break, Shane Dezonie, who’s dealing with an ankle injury, is considered day-to-day, and Tyrin Lawrence had a flare-up in his knee that has required some maintenance. Jamaine Mann, who suffered a knee injury in practice before Vanderbilt’s matchup against Hawaii, is not quite back yet either. Stackhouse also added that while Liam Robbins is now pain-free in his foot, he has no timetable for a return.

With these injuries, Jordan Wright, the Robin to Pippen Jr.’s Batman, will be needed even more. After starting the season strong, Wright has cooled off immensely, averaging just 12.6 points per game after averaging 18.8 in the first four games of the season. Vanderbilt could use some aid from their role players, Myles Stute and Trey Thomas, as they’ll need to put forth a better performance from outside the arc than they have in the past: they rank 13th in the SEC in 3-point percentage at 29.5 percent.

For the Razorbacks, the same holds true. Arkansas is loaded with talent in the backcourt: their five leading scorers are all guards, and all five of them can erupt at any given time. Stanley Umude averaged 21.6 points per game last season for South Dakota, and he proved he’s still got it last week against Mississippi State with 19 points on 3-of-4 shooting from downtown. Au’Diese Toney is an incredibly efficient scorer, shooting 64.4 percent from the field.

Vanderbilt will enter this matchup as underdogs (ESPN’s matchup predictor gives them just a 24.9 percent chance of winning), but right now the Commodores have all of the momentum and the Razorbacks are stumbling. The game will tip on Tuesday at 7:30 p.m CST.