The Commodores were set to meet Stanford in the championship game of the Diamond Head Classic on Saturday, but the game was canceled due to health and safety protocols within the Stanford program. 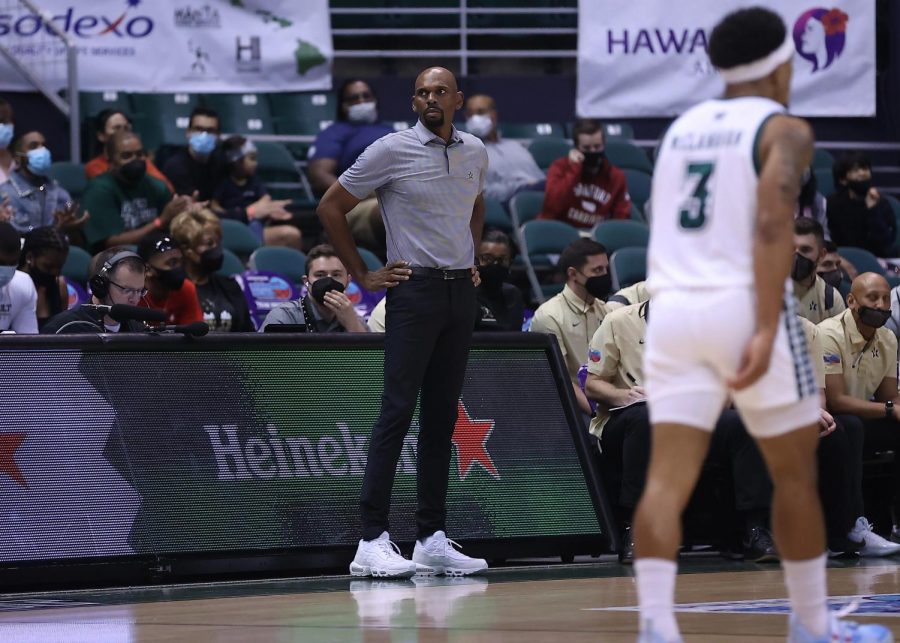 In their final nonconference stanza of the 2021-22 season, Vanderbilt men’s basketball took a trip to the islands of Hawai’i for what was supposed to be a three-game tournament, the Diamond Head Classic. The Commodores will head back to the mainland after a pair of victories over Hawaii and BYU, but due to health and safety protocols in the Stanford program, the championship matchup was cancelled.

After cruising to a victory over Hawaii in their quarterfinal matchup of the eight-team tournament, the Commodores claimed their best win of the season to date, beating a formerly-ranked BYU squad in a nailbiter on Dec. 23.

That sent head coach Jerry Stackhouse’s team to the championship for a matchup with Stanford on Christmas night. But that game was not to be as the Commodores—barring any spontaneously scheduled games in the next two weeks—will conclude their nonconference slate at 8-4.
Dec. 22: Quarterfinal Win over Hawaii, 68-54
Late in the night stateside on Dec. 22, the Commodores bested the Hawai’i Rainbow Warriors in a quarterfinal matchup, 68-54. An 11-point halftime lead was too much for a slightly undermanned Hawai’i team to overcome, as Vanderbilt jumped on the hosts early, leading by as much as 19 late in the first half.

Hawai’i’s Noel Coleman did his best to keep the Rainbow Warriors in the game to the tune of 31 points on 12-of-19 shooting from the field. Vanderbilt had few answers for the lefty sniper as he hit six 3s, but 21 points from Scotty Pippen Jr. sealed the deal for Stackhouse’s group.

The Commodores outscored the Rainbow Warriors 16-7 in the final seven minutes of the game, a run that was catalyzed by freshman Shane Dezonie knocking down a big 3 after Hawai’i had cut the lead to just five points. Dezonie tallied a career-high 10 points on 4-of-6 shooting from the field and chipped in three rebounds and two assists as well off the bench.

I thought Shane Dezonie had his best game of the year last time out vs. Austin Peay and he has carried that over to tonight.

4 PTS and 2 AST already with a few really strong finishes.

Quentin Millora-Brown continued his hot play in the Commodores’ opening game, racking up nine points and nine rebounds after his double-double effort against Austin Peay on Dec. 18. Rodney Chatman earned his first start in the Black and Gold against Hawai’i, something that should become commonplace moving forward this season.
Dec. 23: Semifinal Win over BYU, 69-67
In light of Saturday’s cancellation, the highlight of the week in Hawai’i was a thrilling Commodore win over BYU on Dec. 23. This game had just about everything: pace, 3-point shooting, star guards and drama at the final horn.

Pippen Jr. drove the ship late for Vanderbilt, tallying the Commodores’ final 16 points of the game by single-handedly attacking the paint possession after possession. After exiting the game just four minutes into the second half with three fouls, he returned eight minutes later to dominate BYU down the stretch. He took over on the offensive end, finishing with 23 points on 8-of-16 shooting from the field, and capped his personal 16-point spurt with an open-court steal that gave Vanderbilt a five-point edge with just over one minute remaining.

“He’s smart. I knew he wouldn’t put himself in any bad situations, and I thought he still competed and played hard defensively without fouling. [The last basket] right there, he’s just a competitor,” Stackhouse said of his star guard. “He didn’t get a call there right at the rim, stuck his hand in there and got a good steal to get us a little bit of separation.”

Vanderbilt entered the halftime locker room trailing the Cougars 35-30, but a quick 8-2 run out of the break solely courtesy of Jordan Wright gave Vanderbilt just its second lead of the game at 38-37 three minutes into the half. Vanderbilt made a conscious effort to get Wright going in the second half by posting him up deep in the halfcourt and allowing him to go to work. He totaled 10 of his 13 points in the final frame.

At the defensive end, Millora-Brown anchored the Commodores. Vanderbilt did a nice job of running BYU off the 3-point line—they attempted just 20 3s, the fewest a Commodore opponent has taken since Nov. 24—and Millora-Brown locked down the paint. He finished with 10 rebounds, two blocks and one steal, took three charges and made numerous winning plays down the stretch.

“Jordan [Wright] got it going a little bit to start the second half. We made a concerted effort to try to get him going, and he responded,” Stackhouse said after the game. “I thought Quentin [Millora-Brown] was unbelievable—taking charges, getting rebounds, and none bigger than the one that he got at the end.”

Just before the final horn, BYU’s star guard Alex Barcello missed a floater and despite getting his own rebound, he was unable to put it back in which sealed the Vanderbilt win. BYU was ranked as high as No. 12 in the country earlier in the season and were KenPom’s 22nd-ranked team before the loss.
Dec. 25: Championship against Stanford cancelled
Less than two hours before the scheduled tip-off in the final game of the week, tournament officials announced via Twitter that the game had been cancelled due to health and safety protocols within the Stanford program. Stanford also announced via a press release that they would be pausing all team activities until further notice. This was the second cancellation of the tournament after Hawai’i was unable to play Northern Iowa in the 7th place game earlier in the day due to injuries and COVID-19-related issues.

Tournament officials confirmed to a Vanderbilt spokesperson that the Commodores would be declared the de-facto tournament champion.

Stackhouse has been on record saying that Vanderbilt’s roster is 100 percent vaccinated against COVID-19, but a number of programs continue to pause as COVID-19 numbers spike nationwide. Many teams have explored scheduling spur of the moment games, but if Vanderbilt does not do so, they will enter their SEC opener against Arkansas on Jan. 4 twelve days after their last contest.