Following a dramatic two-point win over BYU, Vanderbilt has advanced to face the Stanford Cardinal in the championship game of the Diamond Head Classic. 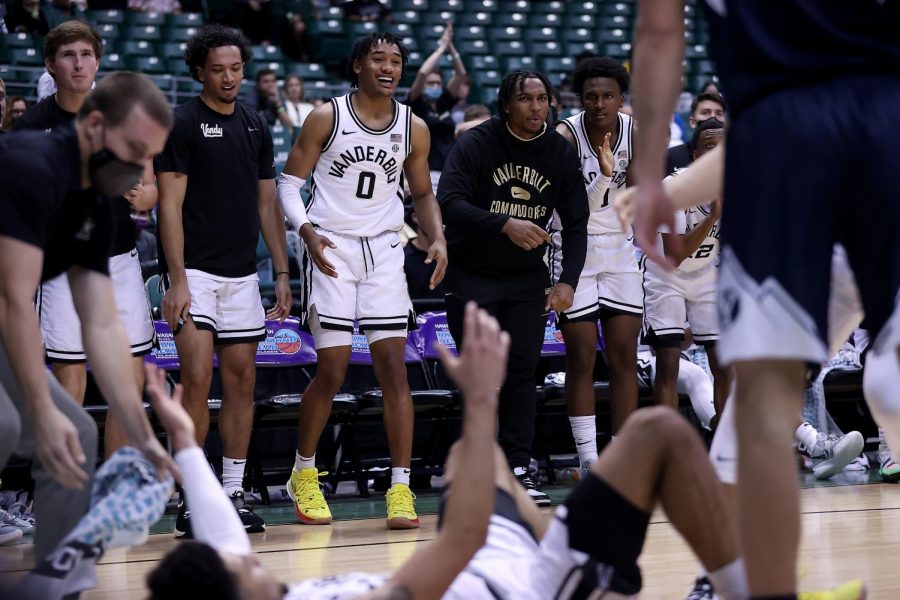 Vanderbilt's bench celebrates a drive from Scotty Pippen Jr. in the Commodores' 69-67 win over BYU on Dec. 23, 2021. (Vanderbilt Athletics)

The Vanderbilt men’s basketball team has had quite the winter break thus far in Hawaii, claiming victories in both of its first two games of the annual Diamond Head Classic tournament. The Commodores will now play the Stanford Cardinal in the tournament’s championship game on Saturday night.

After handling Hawaii 68-54 in the quarterfinals on Dec. 22 with ease, Vanderbilt went on to face a very talented BYU team in the semifinals. Despite a 35-30 halftime deficit, the Commodores came up with big play after big play late on Thursday night and rode star point guard Scotty Pippen Jr. to the finish line and a 69-67 win.

The SEC’s preseason player of the year scored his team’s final 16 points to put away the Cougars in what was the Commodores’ best win of the 2021-22 season. BYU entered the contest as KenPom’s 22nd-ranked team and were as high as No. 12 in the AP Poll earlier this season.

“We’re happy about this [win],” head coach Jerry Stackhouse said after the game. “Hopefully this is something that can propel us going forward—on a big stage, to be able to get a win like this. Now it’s about really validating everything and coming back and getting one [more win] about 36 hours from now.”

The Commodores battled through a couple of injuries to role players to claim that gutsy win. Sophomore forward Jamaine Mann missed his second straight game with a knee sprain that he suffered in practice while freshman Shane Dezonie was a game-time decision due to a sprained ankle. Dezonie played and so too did graduate Rodney Chatman, who has averaged just 19 minutes per game over three games since his return. The Hustler will continue providing updates via Twitter on each of these injuries as tip-off nears on Saturday night.
The Opponent: Stanford Cardinal
You might call this game a rubber match.

Almost exactly seven months ago, Tim Corbin and the VandyBoys walked off Stanford in dramatic fashion in an elimination game during the College World Series. Three months after that, the Cardinal got the best of the Commodores on the gridiron as they marched out of Vanderbilt stadium with a 41-23 victory. Now, the schools will face off on the hardwood to close the 2021 calendar year with Vanderbilt looking for its first ever win over Stanford in basketball (0-3).

Stanford’s (8-4) path to the championship game has not been quite as arduous as Vanderbilt’s. The Commodores battled through host-school Hawai’i on their home floor and the highest-rated team in the field in BYU to get to the championship game. The Cardinal needed to beat Wyoming and Liberty in their first two games in Hawai’i—a pair of squads that both rank outside of KenPom’s top 100.

Both wins were far from decisive, with the Cardinal claiming each by just three points. But head coach Jerod Haase’s team boasts a very similar resume to Vanderbilt’s. At 8-4 overall, they have beaten all of their opponents outside of the KenPom top 100 but have just one victory over teams inside the top 100 (No. 61 Oregon).

They are a well-rounded offensive team that has hit at least four 3-pointers in each game this season, but have surrendered very solid shooting numbers to opponents. Cardinal foes are shooting 35 percent from beyond the 3-point line and they have allowed 10 or more 3s five times already this season.

Stanford boasts impressive size on the wings, with four of their five starters measuring at 6’8” or larger, and all four are capable of filling up the stat sheet. The Cardinal’s two primary scorers this season, however, have been senior forward Jaiden Delaire and freshman forward Harrison Ingram, who both average over 12 points per game.

No members of the Cardinal starting lineup shoot over 31 percent from 3-point range, but starting forward Spencer Jones has been especially hot in Hawaii. The junior has averaged 20 points through two games at the Diamond Head Classic by shooting 15 of 22 (68 percent) from the field and 6 of 11 (55 percent) from beyond the arc.
A Win Would Mean…
Not many teams get the chance to claim championships during the college basketball season, but Vanderbilt will have that chance on Saturday night. After a trio of losses to SMU, Temple and Loyola Chicago, Vanderbilt’s nonconference outlook appeared grim. But a win on Saturday night would leave the sour taste of those losses in the rearview mirror.

“[We want this] more than anything. We didn’t come to Hawai’i just for a vacation, just to have fun for Christmas. We came here on a business trip, with a business mindset,” forward Myles Stute said after beating BYU in the semifinal matchup. “That’s what we plan on doing two days from now is executing and winning a championship.”

The Commodores have had to hurdle a number of obstacles throughout Jerry Stackhouse’s three-year tenure. From starting a new 3-pointers-made streak to snapping a 26-game SEC losing skid to winning the program’s first SEC Tournament game in four years, each step has been important. Saturday marks another important milestone for Stackhouse: his first chance at claiming a trophy.

Capping the nonconference slate with a four-game winning streak and successful trip to the islands would be ideal for Vanderbilt as they look ahead to facing Arkansas on Jan. 4 in their SEC opener. A second Power Five victory to go with the win over Pittsburgh would also look good on Vanderbilt’s NCAA tournament or NIT resumé.
A Loss Would Mean…
Well, it would certainly put a damper on many people’s Christmas celebration.

To beat the host and best team in the tournament on a neutral site 4,000 miles from home only to lose the championship game would certainly be a disappointment. Stanford is no pushover, but the Commodores have faced stiffer competition so far this season and are favored to win this game—by two according to Las Vegas and one according to KenPom.

But the tournament would still come with some element of success. According to KenPom’s ranking database, Vanderbilt’s win over BYU (No. 27 in KenPom) was the programs’ best victory since 2018 when the Commodores beat TCU (No. 24 in KenPom). To do that on a neutral floor against a perennial NCAA Tournament team should provide Stackhouse and his group a ton of confidence.

“We competed, played against a really good team [in BYU]. A team that was ranked in the top 10 this year [in RPI]. We came out and we got the job done,” Stackhouse said after the win. “I thought our coaching staff did a really good job of scouting and making sure that we understood exactly what they were trying to do, and I thought guys went out and executed it.”

Pippen Jr.’s play during the Hawaii trip will also be a confidence booster for Commodore fans. The star guard entered this week’s tournament averaging just 17 points and shooting just 41 percent from the field. But in two Diamond Head Classic games, he has averaged 22 points on 50 percent shooting. There is a better flow to his offensive game especially now with Chatman healthy—that will be something the Commodores can build upon.

The Cardinal and Commodores will tip off their athletics rubber match at 7:30 CST on Dec. 25 from Hawaii on ESPN2.