The latest film from Adam McKay, released to theaters on Dec. 10 and streaming on Netflix starting Dec. 24, uses absurd comedy (and a comet) to criticize the world’s current reaction to climate change. 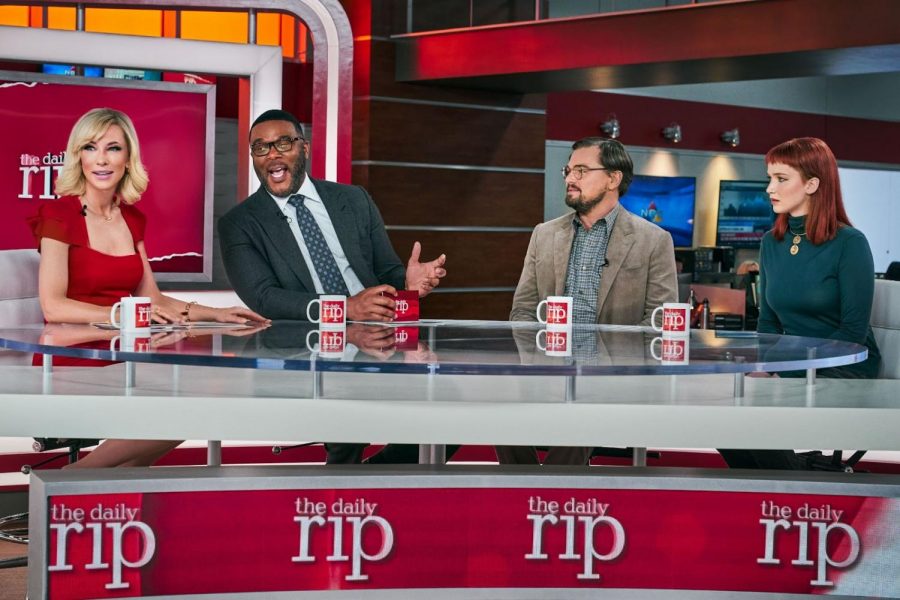 "Don't Look Up" feels fresh and timely, which is entertaining, but also frightening. (Netflix/Don’t Look Up)

Do you ever want a movie that blends comedy, apocalyptic dread, capitalist corruption and Leo DiCaprio? Don’t look further. Or rather, don’t look up!

Adam McKay pulls no punches in his latest satire, seamlessly fusing hard-hitting criticism of modern American society and politics with dabs of dark, dry humor. Critics (and by critics I mean two reviews I read from normal people) say it’s too blunt and not nuanced enough to be satire, but you know what? I’m not complaining. If the jokes land and the criticism is valid and deserved, I will gobble that up with pleasure, which is exactly what I did.

McKay, who previously directed movies such as the ever-so-clever “The Big Short” and the incredibly dumb “Step Brothers,” draws more from the former than the latter in this star-studded political satire. After Ph.D. student Kate Dibiasky (Jennifer Lawrence) discovers a comet headed toward Earth, she and her Ph.D. advisor Dr. Randall Mindy (Leonardo DiCaprio) have to convince the world that the threat is serious. We watch as they face many roadblocks such as corrupt government officials, uninterested talk show hosts, conspiracy theorists and greedy billionaires. They fight to make their case as time slowly runs out, but no one seems to care.

What perhaps justifies the movie being straightforward instead of a more layered piece of satire is the self-awareness behind it. In a recent roundtable that I attended with McKay and scientific advisor to the film Dr. Amy Mainzer, McKay happily acknowledged that the message of the movie is much more spoon-fed than previous satirical efforts.

“[The comet] is a Clark Kent-level disguise of the climate crisis,” McKay said, making it clear that he did not aim for subtlety whatsoever in this project.

The movie is also not subtle at all with its political disses, which McKay claims were equally aimed at all political leanings. They weren’t.

While there were a few pokes toward one side of the spectrum, what stood out were the obvious jabs at the conspiracy lunatics and the Fox News-esque talk show hosts that almost always sit on the other end. Now you know which extreme I’m talking about, and I hope you find it funny when said hosts cry out about Marxists spreading science, or when some obviously well-informed gentlemen claim the government is using the comet to take away their guns—cuz I sure did.

The world McKay skillfully creates is filled with parallels to modern America to such an extent that I wouldn’t be surprised if the country actually reacted to an incoming comet the way he envisioned it. Kate and Dr. Mindy spend a considerable amount of the runtime trying to convince the world that the comet is indeed real and about the wipe out the human race, but America is focused on other things instead. The media covers the latest breakup between two pop stars, played by Ariana Grande and Kid Cudi of all people, or turns the issue into a joke, such as a talk show host asking whether the comet would hit his ex’s house in New Jersey.

The internet’s role in this comet frenzy is, of course, not forgotten and is portrayed in a way you usually don’t see in Hollywood movies: successfully. Normally, mainstream movies weirdly can’t recreate the chaos and randomness of social media. But this trend is evidently not the case here. Dr. Mindy and Kate’s announcement of the world-ending comet is instantly memed per Twitter fashion and masterpieces such as “Meoow. Me likey hunky Star Man” and “AILF (astronomer I’d like to f*ck)” come up on our characters’ feeds. I, unfortunately, have to agree though; I also likey hunky Star Man Leo.

This kind of humor is exactly what pulled me into this movie, which I similarly enjoyed in “The Big Short.” While “Don’t Look Up” unfortunately didn’t feature Margot Robbie in a bathtub breaking the fourth wall, we still got our fair share of absurd scenarios. Such comedy is prominently used in scenes involving the government, where McKay takes a swing at the corruption inherent in American politics.

Whether it’s the chief of staff being President Orlean’s son, the president of NASA being a super-donor to Orlean’s campaign or the White House only acknowledging the comet when it helps with votes, we are constantly dragged through explicit attacks which are clearly directed. These attacks are again not subtle, but McKay still doesn’t care.

“One of the main exports of America is well-thought-out fraud,” he said, remarking on how he believes the toppling of democracy in countries such as Hungary and Turkey follow America’s descent into corruption. “I’d argue America is patient zero.”

Sticking to the not-so-subtle format, we also get a Musk/Bezos-type billionaire who is incredibly creepy and sociopathic—and he’s one of my favorite characters to be featured on the silver screen this year. Peter Isherwell (Mark Rylance) is a stuttering, squeaky-voiced maniac and the third-richest man in the world, so he obviously has a say in what happens to the comet. What if the comet had the potential to be profitable to him, huh?

“How do you even parody a character like that when the real people are so ridiculous?” McKay said.

He’s right, too, because Isherwell ain’t got nothing on Zuck, and Zuck actually exists.

Another one of the best features of the movie, which can be said for every movie he stars in, is the main man Leo himself. As diverse as his cinematography is, we usually associate DiCaprio with the suave, charismatic type that he plays so well. Here, we see him playing the furthest thing possible from such a character: an anxious, Xanax-popping, timid astronomy professor with the sole intention of getting the truth out, distracted by the unprecedented attention he receives in the spotlight.

We watch Leo effortlessly transform from a kind and non-confrontational nerd who needs to repeat “11 benevolent elephants” as a grounding technique into an end-of-the-world preacher who confidently cameos on Sesame Street to warn kids of the coming comet—that sure was an alliterative sentence. But don’t worry, amid this complex character arc we still get our typical Leo rage moments as well, and they’re as visceral as ever.

“You tell your parents that President Orlean and Isherwell are sociopaths and fascists,” Dr. Mindy yells viciously through a television screen, standing next to an unsuspecting resident of Sesame Street. “The government has lost their mind.”

In addition to all this, Leo is also somehow rocking a sick Midwestern accent throughout the movie too. At least I think it’s a Midwestern accent—as a non-American, I’m just grasping at straws here. Regardless of my ignorance, I don’t think it’s far-fetched to predict an Oscar nom for Midwestern DiCaprio.

Leo is not alone as far as noticeable performances go, which is unsurprising when you take a look at the cast of this movie. Timothée Chalamet is a cute anarchist, Jonah Hill is a hilariously douchey chief of staff, Jennifer Lawrence is entertaining in her perpetual state of being annoyed and Meryl Streep is Meryl Streep. Oh, and Cate Blanchett plays a rich, pretentious, fake news anchor which I have to admit was pretty sexy. You should be convinced now.

“Don’t Look Up” is funny, well-written and blunt. It overstays its welcome for about 10 minutes and makes a few poor editing choices throughout, but never falters from being a hilarious, and sometimes sad, social commentary/family drama. Watch it on Netflix and see for yourself what I mean when I say it’s a good kind of weird.