The 2021 AmericasBarometer survey shows that support for democracy across the Americas has not recovered to the levels reported a decade ago. 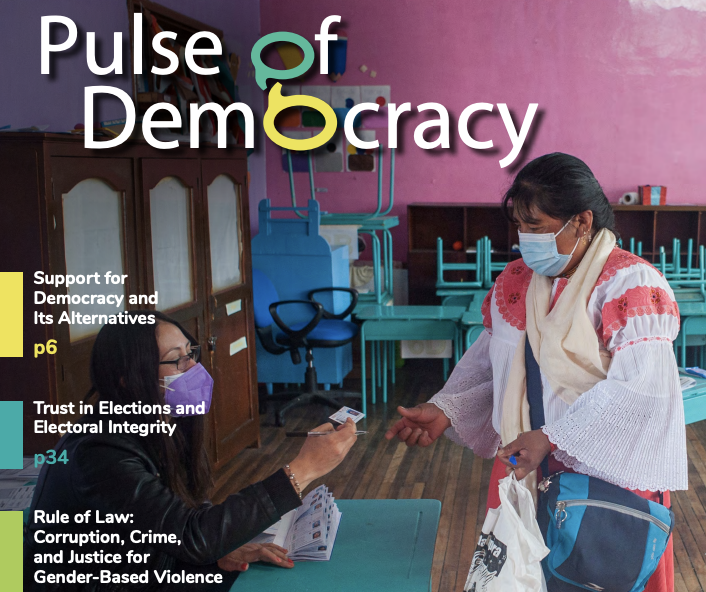 The Latin American Public Opinion Project (LAPOP) revealed its 2021 AmericasBarometer survey results on Nov. 16. Key findings across the Americas include a decreased support for democracy, lack of trust in elections and an increased prevalence of corruption and crime.

LAPOP, headed by director Elizabeth Zechmeister and associate director Noam Lupu, is a Vanderbilt-based institution, which has surveyed public opinion in the Americas for over 40 years. Per the project’s website, LAPOP began conducting the first AmericasBarometer survey in 2004, which is the only scientifically-rigorous, democratic and public opinion survey to have covered all 34 nations in the Americas.

The project conducted 64,362 interviews with citizens of 22 countries in the Americas to collect its data. It is the first time that the survey was conducted via phone and included 324 unique questions, which is more than the previous survey rounds.

Per Zechmeister, the results from the survey are used by students, researchers and government practitioners to investigate and develop democracy. In the 2020 Ecuadorian presidential debate, the data from the survey was referenced as part of a prompt.

“Between 2005 and 2021, a ProQuest search shows 283 peer-reviewed texts that were written using project data,” Zechmeister said. “In an average year, 50-100 journal articles are published by scholars using project data.”

In some instances, the survey has also prompted the creation of public policies.

“Several years ago, we delivered a series of briefings in Guyana, highlighting a lack of responsiveness by the police and low public confidence in the police,” Zechmeister said. “Within days, the president declared a 15-point police reform program, citing our study as a motivation.”

The work of LAPOP has brought Vanderbilt into the spotlight as a forerunner in the scientific study of public opinion, while the project itself is regarded across the Americas as the “gold standard” for public opinion research. LAPOP employs 25-30 Vanderbilt undergraduate students, allowing them to make original contributions in a social science lab.

“A few years ago, the AmericasBarometer was recognized with the Lijphart/Przeworski/Verba Data Set Award from the American Political Science Association (APSA),” Zechmesiter said. “While recognized for providing a valuable raw resource (data) to the academic community, our lab also generates original research at the frontier of survey research methods and the study of public opinion and democracy.”

The report groups its findings into three categories: Support for Democracy and Its Alternatives, Trust in Elections and Electoral Integrity and Rule of Law: Corruption, Crime and Justice for Gender-Based Violence.

“Support for democracy is low but holding steady. Citizens want politics to reflect their views, fair elections, and politicians who act with integrity,” Zechmeister and Lupu said in the report. “Improving the health of democracy will require concerted efforts around dialogue, inclusion, equity, and good governance.”

Support for democracy and its alternatives

The report connects public support for democracy with the durability of democratic governments. AmericasBarometer asks respondents about their support for democracy versus alternative forms of government, their tolerance for military coups, their satisfaction with democracy and their preference between direct democracy, the election of representatives, freedom of expression, guaranteed basic income and services and rule by experts.

In 2021, 61% of respondents from the Latin America and Caribbean (LAC) region expressed support for democracy over all other forms of government. This statistic is slightly higher than that of the past four years but still lower than the 68% level of support in 2010. While the majority of the respondents support democratic ideals, satisfaction with their democratic government remains low. On average, 43% of respondents are satisfied with their country’s democracy. This level of satisfaction remains lower than the 57%  statistic in 2010.

More than half of the respondents from 16 out of the 20 LAC countries preferred guaranteed basic income and services even if there were no governmental elections. However, the majority of respondents from all the LAC countries surveyed preferred freedom of expression over guaranteed basic income and services. Majorities across the LAC region preferred direct citizen vote over elected representatives.

Overall, the report finds that the 2021 survey shows a lack of public commitment to electoral democracy in the region. It claims that, across the LAC region, people are losing confidence in democracy because they have become disillusioned with their elections and their elected representatives.

Trust in elections and electoral integrity

The AmericasBarometer survey provides a cross-national and over-time analysis of trust in elections.

In general, the report finds that overall trust in elections has recovered somewhat from 2020, while most of the public remains skeptical about the integrity of elections in their countries. According to the report, this view on election integrity poses a potential threat to the health of democracy across the region.

Rule of law: Corruption, crime and justice for gender-based violence

The rule of law section of the report focused on respondents’ experiences with corruption and crime, perception of political corruption and neighborhood insecurity and expectations regarding police and judicial response to gender-based violence.

Less than 33% of respondents from half of the LAC countries surveyed claim their basic rights are protected. In addition, most citizens in the LAC region believe that political corruption in their country is widespread; about one in four respondents say that all politicians in their country are involved in corruption. These statements are reflected in the level of bribe solicitation by public officials in LAC countries. Ten percent of respondents from the LAC regions have been solicited for bribes, the highest in AmericasBarometer history. In 2010, only 6% of respondents reported bribe solicitation by public officials.

Per the report, crime is also a significant problem in the LAC region; one in five respondents reported being a victim of a crime. However, crime victimization in the region slightly decreased in 2021 (21% of respondents) compared to the past four years.

While corruption and crime remain prevalent in most of the countries across the region, the report shows that public perception of justice for gender-based violence is positive.