Back on the Hardwood: Vanderbilt men’s and women’s basketball return Saturday

After over a week off for exams, Vanderbilt men’s and women’s basketball will both be back in action on Saturday for a double-header at Memorial Gymnasium. 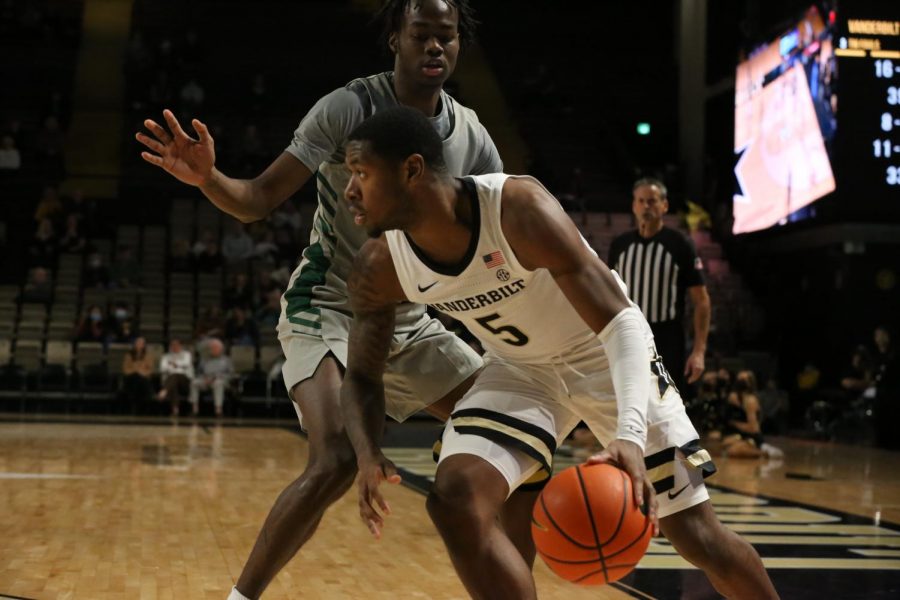 With exams concluding and the first semester coming to a close, Vanderbilt men’s (5-4) and women’s (6-5) basketball will both take the court for the first time after an extended layoff on Saturday.

Jerry Stackhouse and the men’s squad will take the court first, hosting Austin Peay for an afternoon matinee before Shea Ralph and the women host Presbyterian in the night-cap. Stackhouse’s group will look to regroup after three consecutive losses while Ralph’s will try to build on its fourth-straight home victory.
Regrouping
Coming off their first three-game nonconference losing skid under Stackhouse, the Commodores will look to regroup on Saturday against an in-state foe Austin Peay. Assuming that the Diamond Head Classic is not canceled—many teams have begun shutting down due to COVID-19 cases and contact tracing—this game remains the Commodores’ final nonconference contest at home and their first game in eight days.

“We just took some time off,” Stackhouse said on Thursday. “I was able just to watch [tape], to see some things on tape that we can get better at. That’s the most exciting part for me, that we’re figuring things out that are going to help us against teams in our league.”

Vanderbilt will emphasize offensive improvement following a pair of lackluster performances on that end of the floor. The Commodores tallied their third game of the season with under five threes against Loyola Chicago on Dec. 10 and are now hitting on just 29.2 percent of their attempts—294th in the nation. That was a focus for the team over the hiatus.

Unfortunately for Vanderbilt, opponents have not shot particularly well against the Governors. In nine games, opponents have converted on just 29.9 percent of their attempts from downtown. The Commodores will look to reverse that trend on Saturday by prioritizing ball movement and getting its shooters rolling.

In three of Vanderbilt’s four losses, they have notched five or fewer assists and four or fewer made-3s. These numbers are obviously correlated, but such low assist totals put Vanderbilt fifth-to-last of all Power Five conference teams in assists per game (10.7). Poor shooting has furthered this trend, as the trio of Trey Thomas, Myles Stute and Jordan Wright has combined to shoot just 23-71 (32 percent) over the past three games.

Thomas in particular has struggled this year, notching just six 3s on 37 attempts after shooting nearly 40 percent last season. Wright enjoyed success in the Commodores opening four games, growing his regular season double-digit scoring streak to nine but is averaging under ten points over his last five games. Getting open shots for both of them will be crucial moving forward.

“We have put in some plays to give us more movement—we’ve gotten stagnant at times over the last three games,” Wright said on Thursday. “We are definitely a better team than the numbers are showing right now.”

Scotty Pippen Jr., though, will continue to be the catalyst on Saturday, especially now that he is likely fully recovered from a stomach virus he battled last week. The junior gutted out a pair of games, scoring 16 and 23 points in the two. His life will also be made easier by the return of Rodney Chatman, who Stackhouse said could play as soon as Saturday. With Chatman getting healthier, a change to the Commodores’ starting lineup is likely with the graduate transfer certainly emerging as a starter once fully healthy.

“I’m gonna change the lineup a little bit this coming game. We’ve had nine games and obviously some guys aren’t playing as well as we feel like they’re capable of so its just an opportunity to get some other guys [more time],” Stackhouse said. “But more so than anything, I think as [Chatman] starts to get closer…we want to get those other guys that have been in the starting lineup comfortable with that second group.”

Chatman has not played in a game since March 5 but has now recovered from meniscus surgery that he got the first week of November and is on the doorstep of a return. A stingy defender and capable ball-handler, Stackhouse is excited by the prospect of inserting him into the Commodore offense.
Keeping the Momentum
In the night-cap, Ralph’s Commodores will battle Presbyterian looking to build a winning streak. After winning its fourth straight home game against Albany on Dec. 8, Vanderbilt will have three games left before beginning SEC play on Dec. 30 against Texas A&M.

Continued improvement has been the theme of Ralph’s first season on West End as her team—despite being decimated by the transfer portal in the offseason—has fought hard against quality opponents all season long.

“We’ve had this exponential growth from when we started the season and that is incredibly encouraging, it’s exciting, it’s really cool to see our players continue to buy in because they are also feeling the growth and seeing how impactful their improvement is on the court,” Ralph said last week on The Hustler Sports 30 Podcast. “I’m excited for them in that way, but I’m also concerned that we aren’t making the same kind of growth in some other areas.”

Defensively, the Commodores have been impressive in the early going against, albeit lower caliber opponents. Vanderbilt ranks 14th in the country in total steals and is also turning teams over at a very high, 20-per-game rate. Senior Jordyn Cambridge leads the way on defense and after a double-double with ten steals against Albany, she leads the nation with 43 steals. Cambridge will surely be a force once again on Saturday against a Presbyterian team that has been held under 55 points four times already this year.

With the ever-difficult SEC schedule looming, Ralph’s group will have a few chances left to play the favorite. Currently, six SEC teams are ranked inside of the AP Top 25, one of which Vanderbilt will play in under two week’s time. After going just 4-15 in their last 19 SEC games, claiming small victories will be important with tough matchups upcoming.

“For us, I think success is not an event or a game or a record. Obviously, our losses and wins are going to go in that win-loss [column] and people define success around that a lot. I don’t think that’s how we can define success this year,” Ralph said. “I think we have to define our success through the process of getting to win, of getting to that event.”

The men will kick-off the double-header at 1:30 p.m. CST on SECNetwork before the women take the court at 7 p.m on SECNetwork+.