We sat down with sophomore Logan Davis and his Atlas End bandmates. 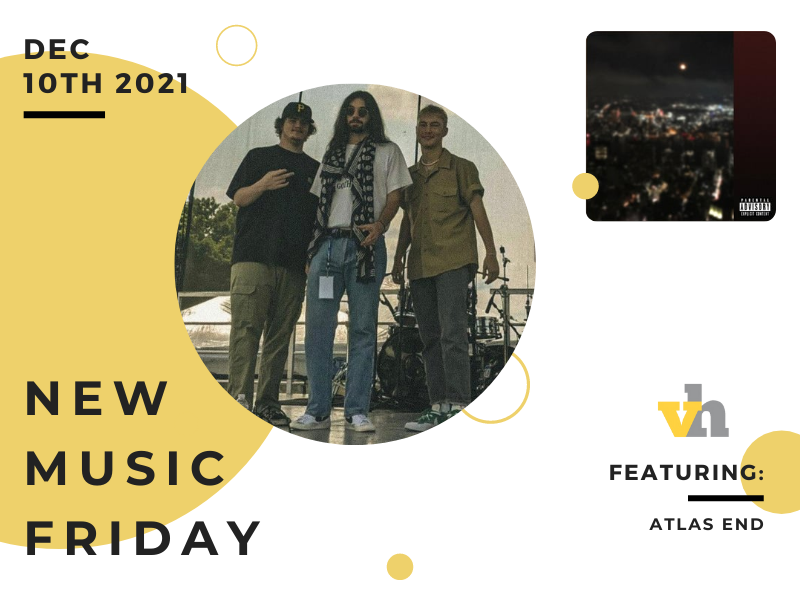 For Vanderbilt sophomore Logan Davis, working as a solo artist led to music that he summarized in one simple phrase: “kinda trash.”

Self-described as a “multi-genre, multifaceted group,” Atlas End simultaneously satisfies cravings for soft, lovesick crooning and sharp, punchy rap—all you need to do is hit shuffle.

After releasing their self-titled breakout album “Atlas End” in July of 2021, the group has released multiple singles and an EP, with another album in the works.

“The first album was pop-oriented, really digestible, guitar-based and with a little piano,” Miksa said. “We’ve grown so much in the past year, we’ve got music the world will never hear. If you compare that to the music we’re making now, it’s insane.”

Just a few months after “Atlas End,” the band released “Starfall,” described by Miksa as “a weird imagination of a festival banger and a rap song.”

This “weird imagination” can be explained by the eclectic list of artists that the band looks to for inspiration. From Prince and Lil Nas X to brakence and Dijon, the band emphasizes the importance of pushing boundaries and making music that feels live, even if it’s through your headphones.

“You can have a good time making music that’s easy to make, but there’s something really rewarding about making a track that you’ve never heard anything like,” Miksa said.

Their most recent EP release, “DIE 4 U,” is a departure from their first album, which focused on more classic relationship tropes and heartbreak. According to Davis (the predominant lyricist of the group), “DIE 4 U” takes on more difficult topics, such as abusive relationships. Featuring abrasive, fast-paced rap tracks like “BLUE TOYOTA,” the tracks demonstrate a clear shift from previous pop-funk hits.

Vanderbilt students might be familiar with their sound after hearing them perform with The Music Room, but their music has reached far beyond the Nashville bubble. From performing at festivals alongside “Freakin’ Out On the Interstate” singer Briston Maroney to their upcoming hometown show in Morristown, performing live is an integral part of Atlas End.

“It’s rewarding to make the music, but the payoff is producing live music—live shows are a visceral experience,” Manuel said. “Showing the crowd what you’re proud of … it’s almost spiritual for me.”

In search of this visceral experience, producer Miksa is studying audio engineering. Miksa credits his studies for elevating his music-producing experience.

“I just took a final on just the physics of sound waves. It was boring but it makes you understand sound in a different way,” Miksa said. “In my head, I’ve got the creative side down, but I’m learning how to put that into practice and make my ideas a reality.”

But the group’s classroom-to-studio pipeline doesn’t stop there. Originally called Autumn’s End, the group needed to make a change after learning that they shared a name with a heavy metal band. While sitting in a Greek literature class, Miksa learned about Atlas, known infamously in Greek mythology for holding up the world. Coincidentally, Davis had just gotten a tattoo of Atlas, and the rest is history.

The band itself isn’t quite holding up the world, but they do have a grasp on making music that’s certainly a world away from “kinda trash.” Check out their latest EP on Spotify, keep up with upcoming shows and releases on Instagram and venture over to the group’s TikTok if you dare.