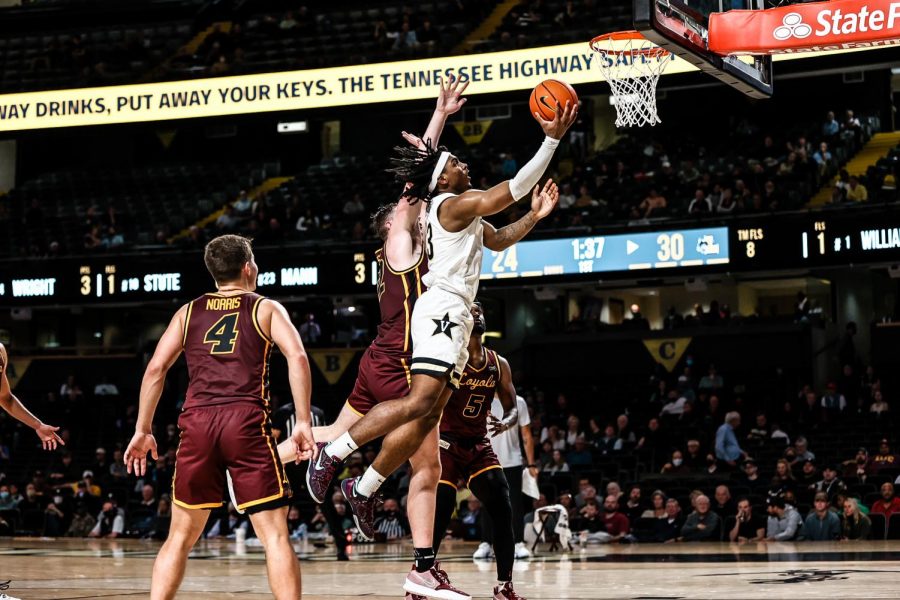 Vanderbilt forward Jamaine Mann goes up for a layup against Loyola Chicago on Dec. 10, 2021. (Vanderbilt Athletics)

Before exams begin on West End, Jerry Stackhouse and the Vanderbilt Commodores hosted the Loyola Chicago Ramblers on Friday night, dropping their third straight contest, 69-58. The Ramblers canned 17 3-pointers—their second-highest total of the season—and that was far too much for the Commodores to handle, as Stackhouse’s team was only able to bury three attempts at the other end. Braden Norris led the way for Loyola, scoring 18 points on 6-8 shooting from the field while Scotty Pippen Jr. once again paced Vanderbilt with 23 points.

“That’s a really good team we played tonight,” Stackhouse said after the game. “They did a great job of moving the ball, did a good job of pressuring us, switching, doing a lot of different things. But I thought we were better tonight moving the ball, just couldn’t seem to knock down shots in our sets.”

Vanderbilt trimmed the Loyola lead to as little as two with 13 minutes remaining, but that was as low as it would get. The Commodores shot just 35 percent for the game—their third straight contest under 40 percent. They also logged only three assists as a team, their second consecutive game with fewer than five.

The Ramblers came out blazing hot from the field, hitting on their first three 3-point attempts en route to an early 11-5 advantage and found themselves leading 30-27 at the break. They entered the contest as one of the nation’s best 3-point shooting teams—hitting over 40 percent of their long-balls—and flexed that strength to the tune of eight first-half 3s. Stackhouse explained after the game that Vanderbilt’s primary defensive scheme is to keep teams out of the paint and having to adjust to defend a team that doesn’t use the paint was challenging.

“It’s just hard to break off who we are for a game,” Stackhouse said. “We are a real heavy gap team trying to not let teams penetrate our paint. But then this is a team we’re really wanting to push out a little bit more. We got caught in just [our natural defense] with the big guy rolling pretty hard and usually for us that means becoming in attack and they did a great job of spraying that ball and moving it around.”

Loyola moved the ball incredibly well throughout the game, shifting the Vanderbilt defense all over the court. But the Commodores hung in largely thanks to the play of Pippen Jr., who totaled 14 of his points in the opening frame. Stackhouse’s team was able to force nine turnovers in the first 20 minutes, but found themselves trailing because they were only able to register five points off of them.

The second half featured back-and-forth action and despite never finding a lead, the Commodores battled. Three-point plays from Jamaine Mann and Trey Thomas kept Vanderbilt hanging around halfway through the frame before an 8-0 run for the Ramblers created separation. Consecutive wide-open 3s from Norris ballooned the Loyola lead to ten by the second media timeout and the Ramblers would not look back.

“We just let them get going early and the rim was just too big [for them] and they just hit every three,” Pippen Jr. said. “Not everyone is aware—I think we need to be more focused going into games. Just making sure adjustments, just making we change our gameplan throughout the game.”

The Commodores used free throws to keep themselves afloat late, getting into the bonus with well over eight minutes remaining in the contest, but weren’t able to find enough defense to slow the high-powered attack of the Ramblers.

After a three-game losing streak, Vanderbilt will enter a much-needed eight-day break for final exams on campus and will be back in action Dec. 18 against Austin Peay at Memorial Gymnasium.