Vanderbilt was unable to shake off its poor second half against SMU, falling in overtime to Temple on Tuesday. 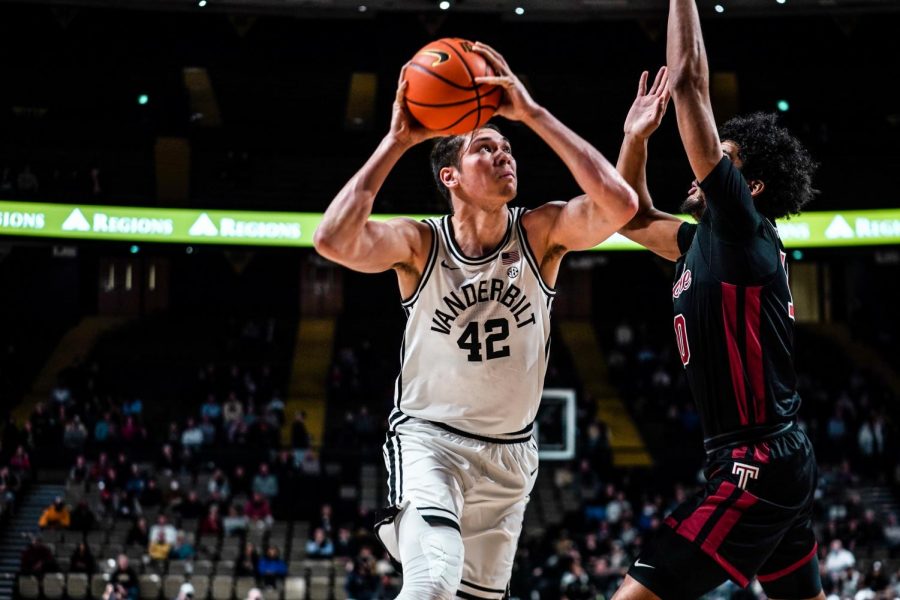 Quentin Millora-Brown goes up for a layup against Temple on Dec. 7, 2021. (Vanderbilt Athletics)

The Vanderbilt Commodores bought themselves five extra minutes, but they weren’t able to defend their home floor, losing to the Temple Owls 72-68 on Tuesday night.

The Commodores scored five points in the final 13 seconds of regulation to force overtime, highlighted by a game-tying 3-pointer from Scotty Pippen Jr. with just three seconds left on the clock, but were outscored 14-10 in the overtime session.

“Our guys battled after a really slow start,” head coach Jerry Stackhouse said after the game. “Continued to battle, battle, battle and was able to force overtime and in overtime, just came up a little short. Made some plays—[Jordan Wright] was really good for us late in the game and then overtime, but we just made some careless mistakes.”

Following a devastating second-half collapse against SMU their last time out, the Commodores were unable to shake their poor shooting against a Temple team that was without its leading scorer, Khalif Battle, who is sidelined for the year. Vanderbilt went just 4 of 26 from beyond the 3-point line, their second-lowest total of the year, and shot 34 percent from the field as a team.

“Disappointing to say the least,” Stackhouse said. “Just felt like that was a it was a game that we needed to get. [I thought] we’d be angry from how the SMU game ended up and come out with a whole lot of energy.”

The teams combined to shoot just 42 of 122 and totaled 51 fouls in an ugly, back-and-forth affair. Vanderbilt juniors Pippen Jr. and Jordan Wright once again carried the load for the Commodores, tallying 16 points apiece. Pippen Jr. battled through a stomach bug to play 29 minutes and nail the game-tying shot.

Vanderbilt began the game with perhaps its worst offensive half of the season. Despite holding Temple to just 28 first-half points, Vanderbilt tallied just 25 on a dreadful 8 of 29 from the field. The ball stuck in the hands of Pippen Jr. and Wright and the Commodores were once again bothered by extended man-to-man pressure defense. But for a 9-2 run by an all-bench lineup midway through the frame, Vanderbilt could have found itself trailing by even more.

Nothing Temple did was overly impressive—the Owls shot just 8 of 25 in the opening half themselves—but they dominated the paint, scoring more than a third of their points near the basket and almost posterizing a number of Vanderbilt defenders with dunks. 21 first-half fouls between the teams also made the start of the contest quite sloppy.

The second half didn’t come with much improvement for either side, as Vanderbilt registered just 11 points through the first 14 minutes of second-half action. More stagnation and missed layups hurt the Commodores, and Temple finished the game 30 of 37 from the free throw line while Vanderbilt went just 16 of 24.

In total, Vanderbilt converted just 12 of their 27 layup attempts—albeit some on tough attempts, but many that the Commodores are accustomed to finishing.

“I think we were getting in the paint. It felt like they were close enough to make [a lot of] those shots,” Stackhouse said of his team’s offense, which totaled just four assists. “I think there were some opportunities for us to kick out and that’s what the message was at halftime—let’s get in the paint and try to make plays for others.”

Next up, Vanderbilt will host its top-rated opponent yet—Loyola Chicago—at Memorial Gymnasium on Friday. Tip-off is set for 7 p.m. CST.