Vanderbilt returns home looking to bounce back against Temple

Following a defeat to SMU, the Commodores will look to get back on track against the Temple Owls on Tuesday. 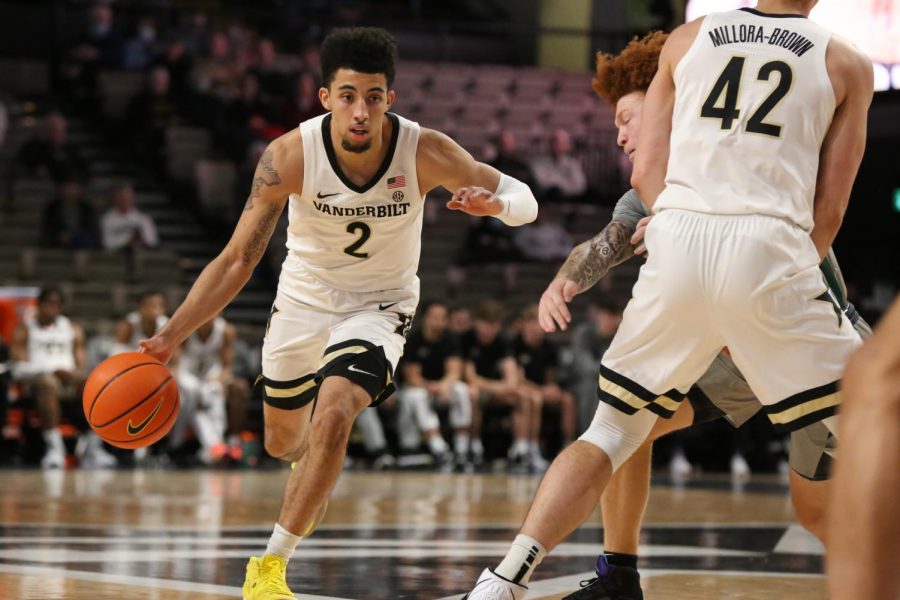 The Vanderbilt Commodores (5-2) will face off against the Temple Owls (5-3) Tuesday night, looking to gain momentum early in the season before conference play begins in January. The Owls will look to extend their four-game winning streak coming into Tuesday’s matchup.

Vanderbilt has gotten out to a strong start in the young season, starting 5-1 before an 84-72 loss in their toughest game to date at SMU on Saturday night. The Commodores held a 12-point lead going into halftime, but quickly saw that lead slip away as the Mustangs piled on 56 points in the second half and left Vanderbilt behind them.

Looking at the loss in closer detail, the Commodores’ shortcomings on defense on Saturday night were unexpected considering Vanderbilt’s success on that end coming into the matchup. Prior to their loss, the Commodores ranked inside the top 30 in the nation in both opponents effective field goal percentage and turnover percentage, per KenPom. Yet, on Saturday night, the Commodores were not able to stop the Mustangs’ backcourt duo of Kendric Davis and Zach Nutall, who combined for 41 points. Looking forward to Tuesday night, the Commodores’ defensive effort and focus will be a key storyline as Vanderbilt will look to tighten up before facing numerous dynamic SEC offenses later in the season.

On the offensive side of the ball, the Commodores have started out the season in strong fashion, led by Scotty Pippen Jr. The SEC Preseason Player of the Year comes into Tuesday averaging 16.1 points per game to go along with 3.9 assists as the conductor of the Commodores offense. Though the numbers are slightly lower than last year, Pippen Jr. has maintained his efficiency and exerted consistent effort on the defensive end so far this season.

Though Pippen Jr.’s success comes at no surprise, the Commodores have received a big boost from Jordan Wright, who has nearly doubled his scoring production from last year this season at 14.7 points per game. Even more, the junior forward has upped his scoring production while maintaining great efficiency, shooting 48.6 percent from the field and 39.3 percent from 3. After losing two major contributors in Maxwell Evans and Dylan Disu to the transfer portal, the Commodores were in need of replacements for their production, and Wright has stepped up in a big way. Wright’s continued development as an on-ball scorer and shooter is something that the Commodores will need as they look to carry some of their early season success into Tuesday’s matchup.

As far as their opponent, the Temple Owls have bounced back after a 1-3 start, winning their last four games in convincing fashion. To start the season, the Owls were led by sophomore guard Khalif Battle, who was averaging 21.4 points per game and shooting a tremendous 48.8 percent from 3. However, in their game against La Salle on Dec. 1, Battle suffered a foot fracture and was ruled out for the remainder of the season. Without their best offensive player, the Owls will come to Nashville facing a big challenge against a strong Commodores defense.

Minus Battle, look for guard Damian Dunn, who is averaging 13.1 points per game, to lead the Temple offense. In their first matchup following Battle’s injury, a win over Pennsylvania, the redshirt freshman scored a career-high 27 points. As the Owls begin to look for a new offensive identity, it seems as if the keys to the offense will be handed over to Dunn.

On the defensive side, the Owls have not been particularly effective. Coming into Tuesday’s matchup, Temple has been below average in defensive efficiency and towards the bottom of Division I teams in terms of opponent 3-point percentage, per KenPom. However, the defense has tightened up as of late during their four-game winning streak. In two of their losses early in the season to Boise State and Clemson, the Owls struggled specifically to stop guards with the ability to score at three levels. With that, there lies a clear answer for Vanderbilt to attack this defense: feed Pippen Jr.

Though the Commodores come into this matchup as heavy favorites, they will face a team that has been scorching hot as of late. Tip-off for Tuesday night is set for 7 p.m. CST at Memorial Gymnasium.