‘Bruised’ doesn’t win the title fight, but it sure goes down swinging 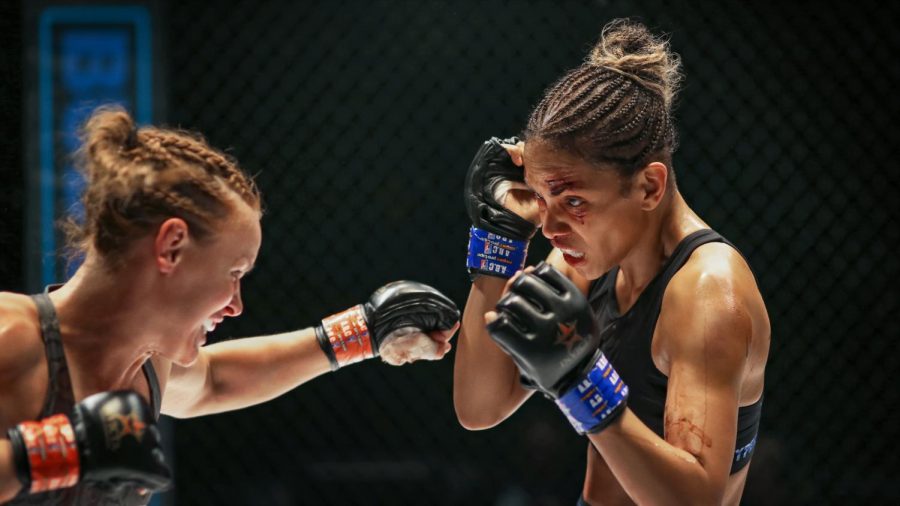 Halle Berry worked with a former MMA fighter to choreograph a realistic fight scene for her directorial debut "Bruised." (Netflix/Bruised)

We want to say “Bruised” is an exact copy of “Rocky.” We desperately want to, need to, agree with everyone else who has already made this comparison—because even director/lead actress Halle Berry has admitted that she was inspired by the 70s classic—but neither of us have actually seen “Rocky.”

We’re going to say it anyway.

As Hollywood veteran Berry’s directorial debut, “Bruised” isn’t terrible—it’s just nothing special. It’s a riches-to-rags-then-back-to-riches story of an inner city woman who’s fallen from grace as an MMA fighter and must find a way to pick herself back up. Add to the stakes that her son from her “dark past” mysteriously returns—and she’s exploring her identity (we think)—and there’s a lot happening.

This would be okay if the ways in which we found out about these events weren’t some of the sloppiest moments of exposition available on Netflix. The movie struggles with the one thing every film nerd loves to criticize—and unfortunately, we both fit that bill. From the moment the plot kicks off, we are constantly reminded that Halle Berry slept through the “Show, Don’t Tell” class in film school. Subtlety is not her best quality.

It’s especially noticeable when the content gets serious, such as an emotionally climactic scene where Berry’s character Jackie confronts her mother (Adriane Lenox) about past experiences with sexual assault. Here, we’re thrown completely for a loop because this aspect of her character, instead of being explored further, is used as a throwaway expositional line to make us feel bad for her. This content is not given the weight it deserves, creating the wrong kind of unease in the viewer.

“The taboo and stigma around mental health and sexual assault are dissipating,” Berry said in a roundtable event, referring to movements such as #MeToo. She also spoke about the importance of adding some light into those dark areas—which would sound great if her film actually accomplished that.

Another scene of hilariously weak and rapid-fire exposition comes in the beginning of the movie, when Jackie and her manager-slash-lover (Adan Canto) run into her mother and the son Jackie abandoned. A crucial set up of what’s to come, this scene should have been way more impactful to the audience, but instead, we get from Jackie’s mother a John Green-style crash course on the entire life history of this poor kid—in roughly 20 seconds. His father is dead, the kid has no place to stay, yada yada yada.

However, this poor kid does provide us with one of the film’s only redeeming qualities: his amazing timing. Whenever a serious scene has just finished unfolding—whether it’s sex or domestic abuse—you can count on Manny (Danny Boyd) to peek his little head around a corner or through a doorway at exactly the right moment, reminding our characters that they shouldn’t be acting this way. Major creds to Boyd for channeling this innocence, something the rest of the characters aspire to re-obtain throughout the film.

Manny isn’t the only successful character, though. The confusingly entertaining MMA coach known as Buddhakan (Sheila Atim) also helps rein the film back in when it loses itself in exposition or crappy dialogue. We weren’t really sure why she was British, or why she was spiritually inclined, or how she managed to turn Halle Berry gay, but we do know that we greatly enjoyed whenever she was on screen. She’s the only fully fleshed-out character, and we have to give props to Berry and the team for creating her original, pleasant personality.

Berry emphasized, in response to my question (humble brag), that she was extremely involved in the casting process for “Bruised.”

“She [Buddhakan] had to be somebody that was otherworldly,” Berry said. And Atim definitely achieves that ethereal aura. “We are only as good as the cast of characters we get to play with.”

Speaking of the cast of characters, we also have many questions about why the old guy was there so consistently. An ever-present figure who always sneaks around in the frame, apparently an MMA coach as well, Pops (Stephen McKinley Henderson) seems to have only one good one-liner—“keep her on the ground, that’s where you’re strong”—but he says it approximately 15 times in as many minutes of screentime. Even his name is a cliché, suggesting that he is only there to check off a box on Berry’s film school stereotype bingo card.

Let’s look at some more film school stereotypes, especially in the sports drama genre. We get about 10 uncannily Rocky-esque training montages of Berry preparing for “the big fight,” which we still don’t feel ready for when it surprises us, even after all those montages. Fake conflicts appear around every corner too, such as when Jackie breaks up with Buddhakan (oh yeah, they’re dating, by the way) for seemingly no good reason. And, the quintessential phone f*ck-up: why does Jackie’s long-lost love/father of her child have only four photos and one video on his apparently unlocked phone?

What is commendable about the movie, however, is Berry’s attempt to tell the story from the perspective of a middle-aged Black woman from the inner city. She mentioned how she rewrote the script—originally designed for a young Irish white woman—from scratch to make it more personally relatable to her as a director, emphasizing the similarities between the fight world and Hollywood. This allows both her and us to draw parallels between her and Jackie’s struggles.

“[Directing this movie] was the hardest thing I’ve ever done in my life,” Berry said, referring specifically to the tough task of directing herself. “But there were some things I just intrinsically knew.” Like the entire plot of “Rocky,” probably.

But that’s okay, because the pacing kept us engaged the entire time. The story always seems to move forward at the appropriate speed, never getting stuck on its flaws. This impressive momentum allows the movie to spend significant time on the final fight without boring us—and Berry even worked with a former MMA fighter to make the fight choreography stand out.

“I want people to think they’re watching a real MMA fight,” Berry said as a big fan of the fighting genre herself.

Though “Bruised” may not make you a fan of the genre, it’s still worth the time. And, you get to see Halle Berry in action, which is always a treat. Buddhakan spinoff when?

“Bruised” is now streaming on Netflix.