Head coach Clark Lea spoke with the media on Friday to debrief his first full season on West End and begin previewing his program's offseason priorities. 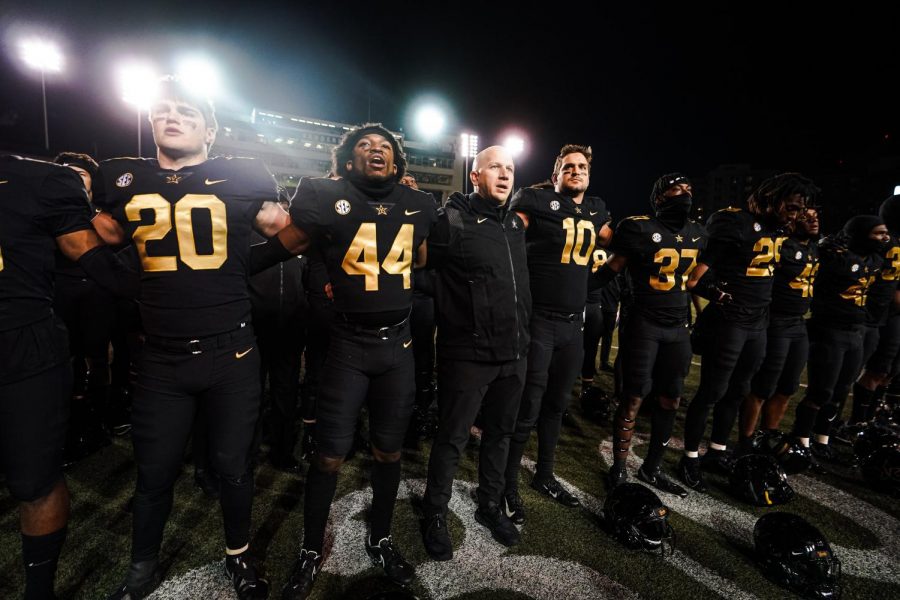 Head coach Clark Lea and his team after a loss to Kentucky on Nov. 13, 2021. (Vanderbilt Athletics)

This is the first in a series of Vanderbilt Football Offseason Notebooks that will be published every 3-4 weeks throughout the duration of the offseason.

With his first full season on West End officially in the books, Vanderbilt Commodores head coach Clark Lea met with the media on Friday to recap his first season and debrief his program’s offseason priorities. His squad concluded its 2021 regular season on a rather sour note, with a 45-24 loss to Tennessee last weekend that pushed their record to 2-10, but Lea is now focused on moving forward into his first full offseason on West End.

At the forefront of those offseason priorities stands recruiting. To date, Vanderbilt’s incoming 2021 class is shaping up to be one of its best since 2018, according to 247Sports. With Early Signing Day set for Dec. 15, Lea and his staff have 18 hard commitments with hopes for more. He, his coordinators and members of his recruiting staff have been on the road almost since final whistle last Saturday and are making recruiting a huge offseason priority.

“Right now, our focus is on recruiting,” Lea said on Friday. “It’ll be kind of a two-week sprint here to the Early Signing Day and we’re kind of all working in earnest on that.”

While Vanderbilt’s offense figures to boast plenty of youth, as a team, the Commodores have endured a number of transfer portal hits. Currently, eight Commodores have entered their names into the transfer portal, according to 247Sports. Perhaps most notable has been the subtraction of senior wide receivers Cam Johnson and Amir Abdur-Rahman. Freshmen defensive linemen Marcus Bradley, Vanderbilt’s highest-rated recruit from the 2021 cycle, and Terion Sugick have also submitted their names to the portal. With the offseason just beginning, more roster shake-up appears inevitable.

“There’s some decisions yet to be made that I’m meeting with guys and working through it. That will probably be, I imagine, solidified over the next couple weeks,” Lea said. “It seems like the ground is constantly shifting but what I know is that the team that returns will be ready for the task at hand and energized for it.”

These losses have amplified Lea’s focus on bringing in freshmen talent, and the sheer size of his recruiting operation has been on full display this past week. On Wednesday, Vanderbilt landed the commitment of three-star defensive lineman Bradley Mann and a number of other prospects remain hot in the pipeline for Lea and his staff. The head coach also explained that he does plan to use the portal to his own team’s advantage, but sees a higher appeal for high schoolers, especially with his program in its infancy.

“When you look at sustained growth, or building to sustained growth you are still looking at a high school player being valued a little higher,” Lea said. “We will absolutely look at the portal as a way to strengthen depth… yet the focus will first be on stocking that freshmen class with people we feel like are talented players that can impact change immediately but that can also develop into high-level SEC performers. The balance of that is to be determined. We are working on that now.”

Once the recruiting “sprint” slows down, Lea will certainly prioritize evaluating his support staff. Much has been made about the potential for a new offensive coordinator on West End after current coordinator David Raih was relieved of his play calling duties before the season began. The Commodores then went on to average just 15.8 points per game, good for 128th out of 130 college programs, but Lea is not ready to make any final decisions regarding coordinators or position coaches.

“We’ll address the staff and all that is entailed there once the recruiting waters settle a little bit. But I’m pleased with our growth together,” Lea said. “I think that there were a lot of strides made. I think chemistry within the staff is critical, and I see that. We’ll, as a staff, have discussions after recruiting and that’ll give way to all those decisions that need to be made moving forward.”

Vanderbilt has endured four straight years with different offensive play-callers, a streak that began with Andy Ludwig in 2018-19 before Gerry Gdowski and Todd Fitch took over those positions in consecutive seasons in advance of Raih. Lea noted that he understands the effect that turnover has on his players and wants to value consistency in the role—especially considering that his offense is a younger group.

“Developing those relationships and that experience together compounds growth within the staff,” Lea said. “So I will never see it as a situation where when you have issues, you look for the escape hatch. To me, it’s where you have issues, you address them, you work to grow together and you work to push evolution for the position coach or within the position room that allows for the advancement… Not that we didn’t have issues, we will address those. But we address them with the mindset of development just like we would our players.”

The next big marker for this team will be Early Signing Day in under two weeks. But following winter break, a number of fresh faces will arrive on West End as early enrollees. Three-stars Quantaves Gaskins, Jayden McGowan and Steven Sannieniola are a few of those early arrivals who will get an extra semester to train with the Commodores this spring. With a foundation built, Lea and his staff will now be able to dive into the nitty gritty a bit earlier this year.

“Our habits are way ahead of our results,” Lea said. “Year one is about what we do. Year two is about how we do it. To go into depth and detail, what we weren’t able to do last January is throw or train technique or tactic specific work. But now knowing that we have systems in place and structures in place, we can start the process of growing into those systems and structures now—we don’t have to wait.”