The pledge was announced by the university while 14 Vanderbilt students participated in international climate change negotiations. 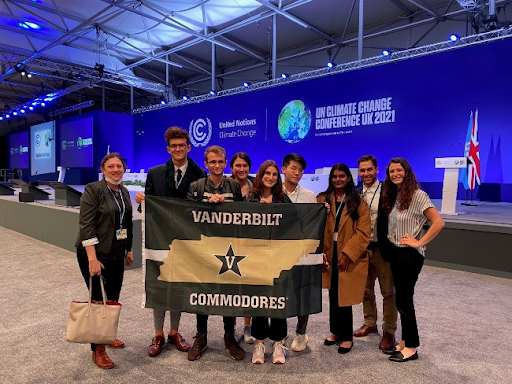 From Oct. 31 to Nov. 12, 14 Vanderbilt students attended the 26th annual Climate Change Conference (COP26) held in Glasgow, Scotland. During the conference, Vanderbilt administrators also signed onto the Race to Zero—universities and colleges coalition.

By joining the Race to Zero coalition, Vanderbilt has 12 months since the Nov. 8 signing date to set an action plan in which they must outline actions that will be taken toward achieving both interim and final carbon-reduction goals. They must also develop an annual, public report of their progress towards these targets within one year of signing on to the coalition.

According to a Nov. 8 press release, Vanderbilt has pledged to attain net-zero carbon emissions by 2050 and to strive to reduce by half its “fair share” of greenhouse gases by 2030.

“I am excited for Vanderbilt’s increased visibility and recognition as a leader in addressing climate change,” Dundon said in the press release. “In addition, I am thrilled for the significant learning and discovery opportunities for our Vanderbilt students at COP26.”

Sophomore Matthew Brolund, one of the students who attended COP26, said he and his peers observed how students from around the world organized themselves to represent youth interests at the conference. Per Brolund, the youth delegations organized petitions with the support of 10,000 signatures so that they could earn speaking time at the conference.

“It was cool seeing the youth come together because it [the conference] didn’t really feel like anything was really substantial,” Brolund said. “I think most of my group felt that a lot of it did seem like the speeches were there for optics and not necessarily actual substance.”

Brolund also reflected on the significance of the university’s Race to Zero commitment.

“I’m happy that they signed it, of course,” Brolund said. “But, I never really feel like any of the things that are happening or the conversations that are had, at least on an institution level, are really enough.”

Sophomore Julia Tilton, representative of Dores Divest, said that there is more work to be done by Vanderbilt in their journey to become more sustainable, even in the wake of the Race to Zero signing.

“While Vanderbilt’s decision to sign onto the Race to Zero campaign is both admirable and necessary, the university will not be the ‘leader in addressing climate change’ that its leadership claims it is until it begins the process of divesting from fossil fuels,” Tilton said. “The goal of Race to Zero is to achieve a Zero Carbon World; this is impossible if Vanderbilt continues to invest portions of its endowment in an industry that actively emits carbon into the atmosphere, accelerating global warming.”