Head coach Jerry Stackhouse and Scotty Pippen Jr. discussed the state of the team and their road showdown with an SMU team led by star point guard Kendric Davis. 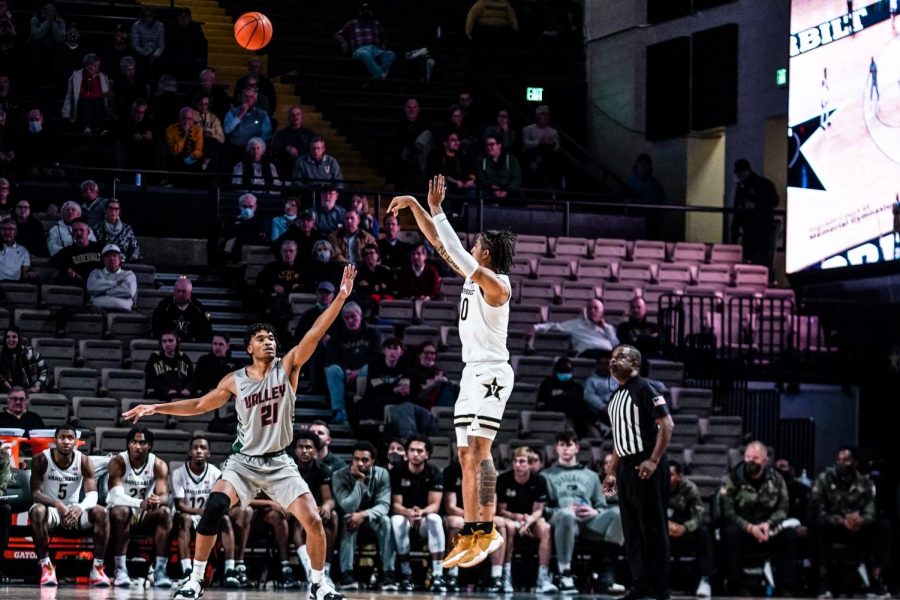 Vanderbilt heads to Dallas to face off against SMU on Saturday (Vanderbilt Athletics).

Head coach Jerry Stackhouse and junior Preseason All-American point guard Scotty Pippen Jr. spoke to the media Wednesday ahead of the team’s road trip to play Southern Methodist University on Saturday. Vanderbilt has won five of their six games to start the season, though SMU may present more of a challenge than previous opponents.

The primary struggle for the Commodores in their season to date has been the health of transfer center Liam Robbins and transfer guard Rodney Chatman, who both remain out.

“But at the same time, those guys get back when they get back. Right now we have to focus on the guys that are there and doing a really good job,” Stackhouse said.

One struggle with the short-handed roster has been generating offense, as they scored only 38 points against VCU in their lone loss this season. Against a differently equipped opponent, Stackhouse spoke to his expectations of the matchup this Saturday.

“It’s a good test for us, as a team that presents some challenges for us defensively,” Stackhouse said. “I think we’ll be able to run our stuff and hopefully execute the way that we’re capable of.”

The road trip will come at a busy time for the Vanderbilt student-athletes, as they will leave just days before the final week of classes.

“It’s just been a focus for us this week from that standpoint, really tying the bow on a lot of loose ends going into their finals,” Stackhouse said.

The game against SMU will be the second road game for the Commodores this season, previously defeating Pittsburgh on the road 68-52 the day before Thanksgiving.

“Every game presents its own challenges. It’s good that we know that we’ve gone on the road and had a quality win against a good team,” Stackhouse said.

The Commodores will have to contend with senior point guard Kendric Davis of SMU, who has averaged 20 points, five rebounds and five assists on high efficiency thus far this season.

“It’s gonna be a team effort, he’s a handful,” Stackhouse said. “He’s a guy that can pass the ball, so we’re going to try to put a lot of attention on the ball, still aware that they’ve got good shooters and good cutters.”

Pippen and Davis were both named to the 2022 Bob Cousy Award watch list for the best point guard in college basketball. Pippen shared his excitement to face off against another talented point guard.

“There are things I live for, you know, playing good competition. I’m excited about the matchup,” Pippen said. “I didn’t even know about the list, so that’s just more motivation to compete.”

Going into his third year, Pippen talked about the attention he receives from opposing defenses given his reputation as a scorer, averaging 20.8 points per game last season.

“I think going into this season, everyone knows I can score a ball,” Pippen said. “So teams are trying to take away my points, so I have to adjust to being doubled and stuff like that.”

Pippen continued to describe the impact he wants to have on the game this season, focusing on how he can create opportunities and open looks for his teammates on the offensive end.

“I know I try to make my teammates, make them hit shots. You know, to get them open and let them make shots,” Pippen said. “It’ll all open up for me in the end.”

Finally, Pippen was reminded of the first time he played SMU during his freshman year, a 92-81 loss for the Commodores.

“I remember we lost,” Pippen said. “So I got a chip on my shoulder to come back and get a win this time.”

Vanderbilt will look to avenge that loss against SMU Saturday at 5 p.m. CST.