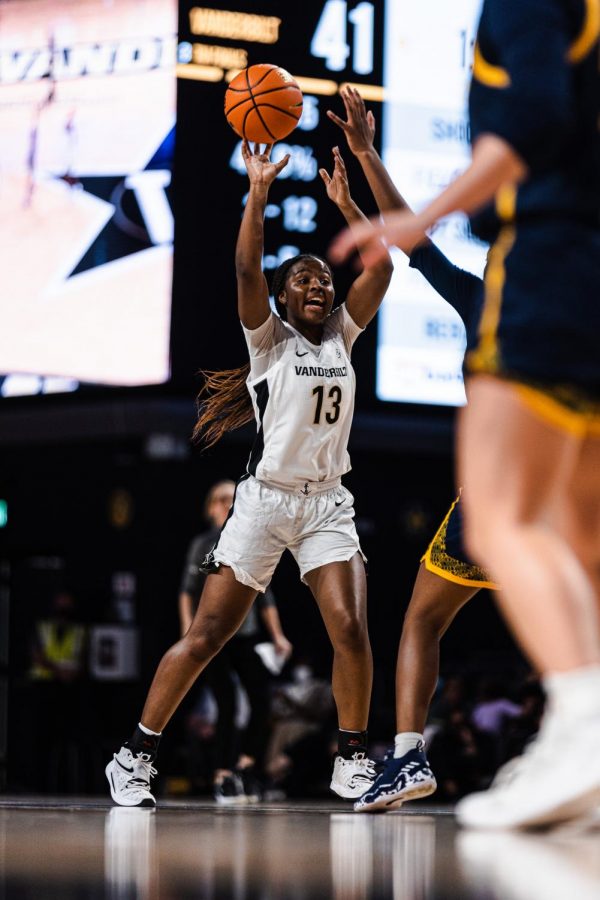 After winning one of three games at the Paradise Jam Tournament in the U.S. Virgin Islands, Vanderbilt came back to Nashville with a vengeance, routing Chattanooga 91-61. Vanderbilt won their third consecutive home game by creating havoc defensively and generating good shots offensively.

“I think we are starting to understand how good we can really be,” head coach Shea Ralph said. “It is a mindset. Our baseline expectation is to come out and compete to win. Not just to come out here and play the game…Our mentality is an expectation to win and we will continue to build on that.”

The Commodores began the night on the offensive and ran with it until the very end of the game. Vanderbilt quickly infiltrated Chattanooga’s 2-3 zone with a jump shot from senior forward Brinae Alexander. The first quarter would be much of the same as Vanderbilt shot an impressive 50-percent from the field. Vanderbilt led Chattanooga 23-13 with ten minutes remaining in the first half.

“If you can keep people from scoring you will always have a chance to win,” Ralph said. “I think it’s important for us to make sure that every single possession matters. It has to be very difficult for teams to score on us.

Vanderbilt took command of the second quarter and ruled Chattanooga on both sides of the floor. The Mocs went scoreless for over four minutes of the second frame, from 6:34 to 2:09 remaining. During this period, Vanderbilt went on a 9-0 run. The Commodore defense forced seven turnovers and scored 14 points off of them in the second alone. Fifteen of Vanderbilt’s 23 second-quarter points came from the bench, proving that Vanderbilt has a lot of depth on their roster.

Freshman guard De’Mauri Flournoy came off the bench and excelled, posting 17 points for the game and one highlight reel play. With just seconds remaining in the second quarter, Flournoy made a half-court desperation shot as the clock buzzed with double zeroes. The sinking of this shot epitomized the silencing effect Vanderbilt had over Chattanooga. With just two quarters remaining, Vanderbilt led Chattanooga 46-23.

The Commodore lead was never in jeopardy. They remained untamed offensively, scoring 23 third quarter points and allowing Chattanooga to score only 13. Midway through the fourth quarter—with 7:23 remaining in the game—Vanderbilt eclipsed their previous season-high of 75 points. Vanderbilt’s offense was firing on all cylinders, scoring at a 41.3-percent rate from the field, totaling 26 points in the paint and adding 22 points via the fast break.

“I think that tonight was another step in the right direction for our team,” Ralph said. “It’s nice to see growth from lots of players. It was nice to see all twelve players get some time tonight. I think that everyday we’re getting better.”

Vanderbilt will look to tally their second consecutive win on Sunday when they gear up to play the Kansas Jayhawks in Lawrence, Kansas, at 2 p.m. CST.