After a convincing 75-36 victory over the Delta Devils, the Commodores have won three straight and look to carry their momentum into their next matchup against SMU. 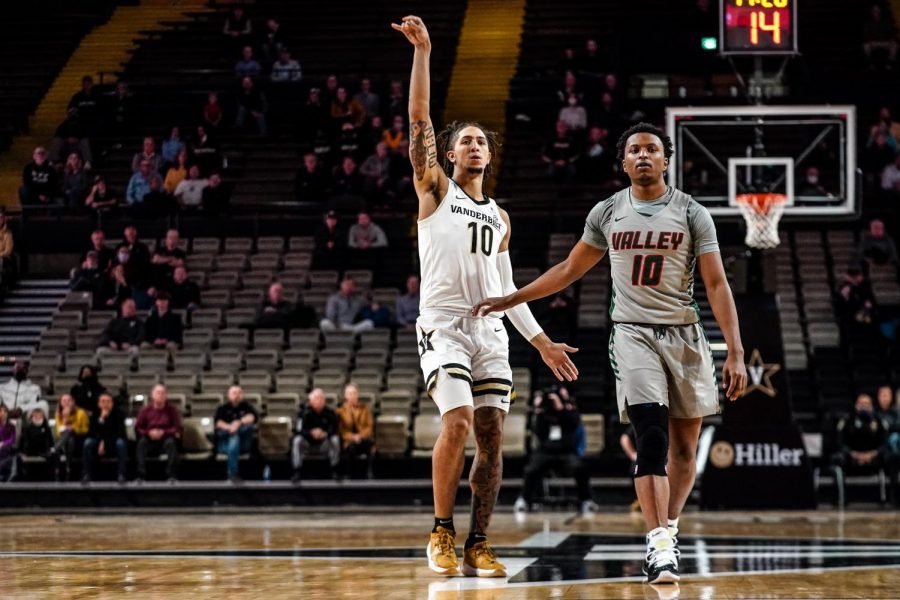 In their first game back after Thanksgiving, the Vanderbilt Commodores showed no signs of rust, soundly defeating Mississippi Valley State 75-36. Myles Stute stood out in a strong team performance, igniting the team’s offense and leading Vanderbilt in scoring. Notably, 18 of Stute’s 20 points were from beyond the arc, setting a new career high in 3-pointers made and overall points.

“Bit of a sluggish start,” head coach Jerry Stackhouse said. “I thought we had a good second half. Our defense was really good in first half of the game and that continued in the second half, and we were able to pull away.”

Vanderbilt started quickly. They jumped out to an 8-2 lead with two 3s in their first two possessions and a Scotty Pippen Jr. layup on the third. After this promising shooting early on, the Commodores went cold. They missed their next eight attempts from distance, allowing Mississippi Valley State to linger around despite starting 3-of-13 from three-ball land themselves.

The Commodores soon went on another scoring streak to extend their lead to 16-5. However, the Delta Devils responded with a five-point run of their own, tightening the game’s margin to six. Vanderbilt’s advantage would stay in this range for the rest of the period, finally settling at 26-17 when the clock hit zero.

Overall, the Black and Gold maintained a solid defensive front in the first half, forcing nine turnovers and only giving up three offensive boards. By contrast, Vanderbilt gave up the ball a mere three times and racked up six offensive rebounds before the break. The team’s dominance on the glass would carry over into the rest of the contest, as the final tally would read 45-30 in favor of the Commodores.

The second half started similarly to the first as Vanderbilt put away some early 3s. To be more specific, Stute put away some early 3s. He scored the half’s first three buckets—all shots from downtown that extended Vanderbilt’s lead to 35-17. Soon, the whole Commodore squad found its stroke. Sophomore Tyrin Lawrence showed off his athleticism with an acrobatic layup, and Pippen Jr. added five points with a pair of free throws and a three of his own. In the blink of an eye, the game was out of hand for Mississippi Valley State who now trailed 51-23 with just ten minutes remaining.

“I was really just out there hooping,” Stute said. “My teammates kept finding me, and I just kept letting it go.”

The final quarter of the matchup finished in the same manner as the rest of the game. Vanderbilt continued to make its way to the line and made the Delta Devils work for any shot they took. By the buzzer, Vanderbilt led 75-36, shot 44% overall and held Mississippi Valley State to a meager 20% shooting. The 39 point margin is the biggest of Vanderbilt’s season thus far.

Vanderbilt will face off against 5-3 SMU in Dallas this Saturday at 5 p.m. CST. There, Stackhouse’s squad will try to extend its win streak to four and lift itself to a superb 6-1 start.