Hanksgiving, the Fall Feastival and the Interfaith Council Thanksgiving dinner are just a few of many celebrations that were put on throughout campus. 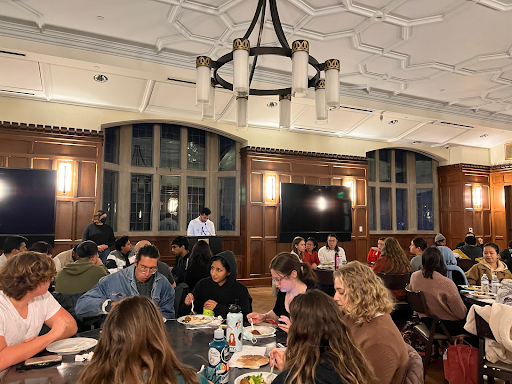 Students eating dinner at the Interfaith Thanksgiving event hosted by the Interfaith Council, as photographed on Nov. 16, 2021. (Hustler Staff/Duaa Faquih)

Throughout this past November, Vanderbilt students and organizations have organized Thanksgiving celebrations on campus leading up to the holiday. With a variety of foods and substantial turnout from members, these events offered students the opportunity to celebrate Thanksgiving with their peers.

On Nov. 15, the Interfaith Council, an organization that encompasses a variety of religious and spiritual traditions, hosted a Thanksgiving dinner. The dinner was held at the Memorial and Reading Room at Alumni Hall and was open to those of all religious and spiritual beliefs. Different speakers represented the values of gratitude within their various religions.

“I think Thanksgiving has historically been a time of unity, so we wanted to reinvent that and make it about unity with different types of religious and spiritual backgrounds,” Vice President of the Interfaith Council and junior Malak Elmessiry said. “The room is loud, and that means that people are talking. That was the main purpose of this event.”

Junior Bri Acosta agreed that the event was an opportunity to encounter new students across campus.

“I like how I got to meet people I wouldn’t have met otherwise,” Acosta said.

In a similar way, the Upper Lewis/Upper Morgan “Turkey Treats and Thank You Cards” event took place on Nov. 18 in the Morgan House Conference Room. Attendees made thank-you cards to show appreciation to someone in their life.

“One person even wrote a card to someone who says good morning to them every day,” sophomore Eman Noraga said.

Upper-Division Residential Colleges held their third annual Friendsgiving at the Kissam Center on Nov. 9, with a traditional Thanksgiving dinner as well as a Veterans Day service project, photo booth and made-to-order coffee by Proverbial Cup.

All students in the upperclassmen residential colleges (Moore College, Warren College, E. Bronson Ingram College and Nicholas S. Zeppos College) were invited to participate and celebrate with their peers. Sophomore and Moore resident Olivia Marco commented on the quality of food provided at the event.

“Best food I’ve had on campus thus far; I had to go up for seconds because it was so good,” Marco said. “I left no crumbs.”

Another holiday event, the annual Fall Feastival, was held on Tuesday, Nov. 16 at the K.C. Potter Center and was hosted by the Vanderbilt Lambda Association in partnership with the Indigenous Scholars Organization. It offered queer students a safe space to celebrate and express gratitude for one another. There was a significant turnout at the event with people standing around the table due to a shortage of seats.

“Queers show up. They always do,” sophomore Jo Krump, Lambda large event coordinator, said. “We sent out an invitation into the Lambda Groupme asking people to sign up for food and a lot of people decided to sign up, which was really nice to see.”

According to Krump, the name of the event was centered around inclusivity and purposefully omitted references to Thanksgiving by instead focusing on celebrating community.

“This event, a collaboration with ISO, centered indigeneity on the event because Thanksgiving is a colonialist holiday,” junior Bleu Gray, Lambda president, said. “So, that was the idea, just to bring people together before the break.”

East Friendsgiving, held on Nov 14., featured catered dishes as well as food contributed by each floor, including the faculty head-of-house, Elizabeth Meadows.

“It was such a good time to hang out with different people from throughout the house and see the food that everyone made,” first-year Alice Heiden, an East resident, said. “People went crazy for the mac and cheese and cookies made by our own residents, which was really cute.”

Heiden also commented on the informality of the event, with an emphasis on casual conversations and familiarity amongst residents.

“I loved how it was a much more laid-back event; people were standing and eating all over the apartment, just joining in any conversation and meeting new people,” Heiden said.

Eshan Subramaniam, a first-year and Sutherland resident, had similar sentiments towards his house event, Suthgiving, which was held on Nov. 6.

“The Suthgiving event included various pies, hot cocoa and cider and numerous arts and craft activities that we all really enjoyed together,” Subramaniam said. “I never thought I would consider the residents of my dorm family or my college a home, but here at Vanderbilt, it’s impossible not to.”