Residents in Tolman and Cole raise noise complaints, and those in McGill report structural damage due to blasts. 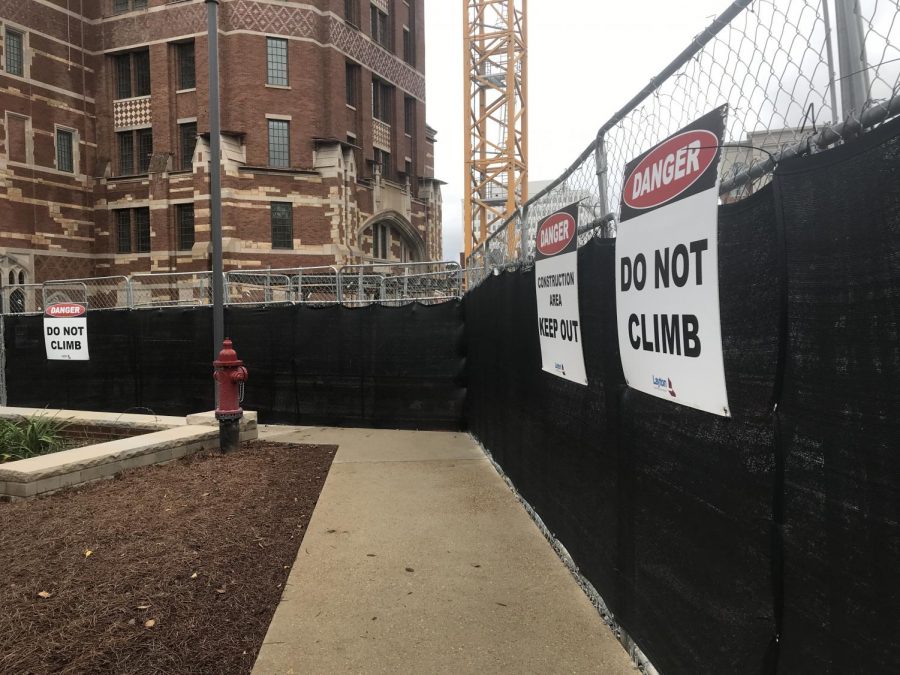 Construction of Residential College C in the West End neighborhood began the week of Oct. 25, causing “disruptive” blasts and noise for students in surrounding residence halls. The blasts will continue until mid-December, occurring daily at 9 a.m. CST, 11 a.m. CST and 1 p.m. CST, with occasional delays to 3 p.m. CST, according to an Oct. 21 press release.

“Today, I decided to go to Central Library because it [construction] started at 9, so it woke me up,” sophomore Charity Yarbrough, a McGill resident, said. “The drilling was so loud, and the boom was shaking the entire building. My blinds were aggressively shaking against the wall.”

Sophomore Carlos Caballero, another McGill resident, compared the effects of the construction on McGill to that of a “mini-earthquake.”

The Office of the Dean of Students commented that the construction has been set to take place during times that they believe to be the most accommodating of students.

“This is a well-organized and supervised operation,” the Office of the Dean of Students stated in an email to The Hustler. “The timing of the blastings has been strategically chosen, including avoiding early morning and evening. A series of four to five horn blasts also precede each blasting period to provide warning.”

However, the preemptive measures have not been effective, according to sophomore Isabella Sherman, another resident in McGill.

“We usually can’t hear the warning signal that there’s supposed to be before the blasts, so it can be kind of anxiety-inducing, just hearing it and being confused as to what’s happening,” Sherman said.

Sophomore Dani Wilson, a resident of Cole Hall, agreed with Sherman’s reports of added stress due to the construction.

“For the most part, they [the blasts] just give me temporary anxiety,” Wilson said in a message to The Hustler. “If I have a day to sleep in, the early blast wakes me anyway. It seems to happen at the most inconvenient times.”

Caballero also reported to The Hustler that cracks allegedly due to the blasting can be seen along a wall on the fourth floor of McGill near the staircase. The Office of the Dean of Students stated that damage has not occurred due to the construction.

“Prior to the start of blasting, the construction company conducted a pre-blasting survey, which included taking photos of each wall and ceiling of rooms/buildings in the West End Neighborhood,” the Office of the Dean of Students said. “There have not been any maintenance issues due to blasting.”

Among students, one of the main complaints regarding the construction is an alleged lack of transparency.

“The RA and President of McGill know about the situation,” Yarbrough said. “But we haven’t heard anything from anybody.”

Not all students have reported negative experiences as a result of the blasts. Sophomore Grace Kirtley, a Cole resident, said in a message to The Hustler that the construction is not disruptive.

“They choose times when I’m not usually in the dorm or sleeping and, even when I am, I don’t usually notice it,” Kirtley said. “At first, it was a little unsettling because I forgot it was happening, but once I remembered, it wasn’t too big of a deal.”

Sophomore Josh Mahabeer, a Tolman Hall resident, similarly told The Hustler that he doesn’t think the construction has largely affected Tolman residents. However, he commented about the noise from the construction and how it can be disruptive at times.

“My main complaint is the noise from the implosions and the heavy machinery,” Mahabeer said in a message to The Hustler. “You hear it at all hours of the day, and it can be hard to study, do work or even sleep.”

Senior Sophie Acosta, who lives in the Zeta Tau Alpha house on Greek Row, echoed Kirtley and Mahabeer’s opinions that the construction is not overly interruptive for residence halls.

“It doesn’t bother me when I’m inside the house,” Acosta said in a message to The Hustler. “It just sounds like someone dropped something on the second floor. It’s not like it bothers my sleep or studying or anything.”

The Office of Housing and Residential Experience (OHARE) sent an email to all Zeppos residents about a scheduled power outage on Nov. 22, lasting from 8 a.m. to 3:30 p.m. CST. The email states that the outage is due to electrical construction work on the residential colleges in the West End neighborhood.

“Student rooms will be without power, including lights, outlets, heat/air conditioning, and Wi-Fi,” the email reads. “You are not required to leave your room, but you may choose to for your comfort.”

The Office of the Dean of Students told The Hustler that students should sign up for the West End Neighborhood e-newsletter to stay up to date on construction. The most recent newsletter was published in February 2020 and gives details regarding the construction of Zeppos College and the former Delta Kappa Epsilon (DKE) house, which both housed students beginning in the Fall 2020 semester.