The lanes in Wilmington, Delaware, proved inhospitable to the Commodores in close games, as the team finished with an impressive fourth place finish despite a 7-5 record and myriad tough breaks down the stretch. 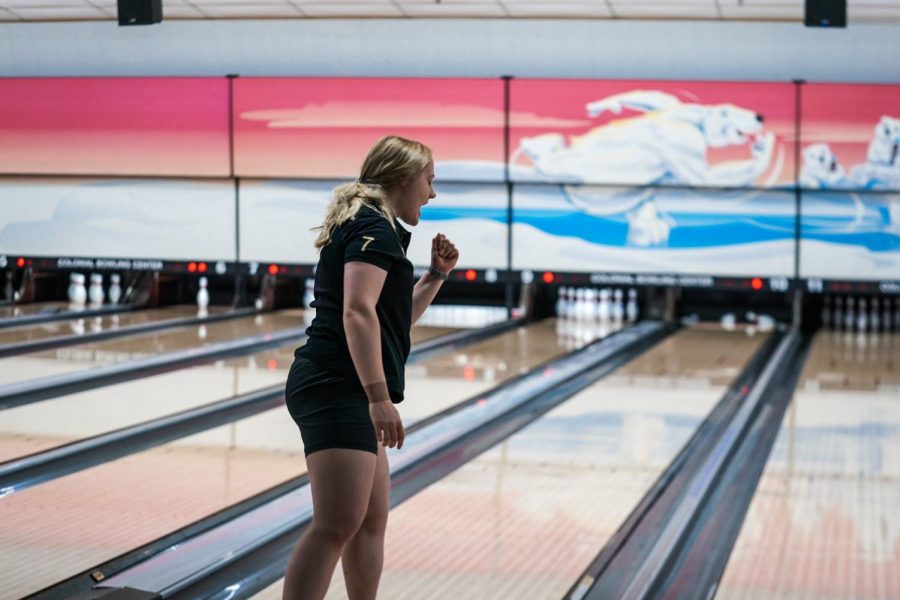 Vanderbilt bowling competes in a match during its fall 2021 season. (Vanderbilt Athletics)

If there was one theme for this year’s University of Maryland Eastern Shore Hawk Classic, it was bad beats. Vanderbilt, despite finishing fourth, had its fewest wins of any competition thus far this season.

Substantial victories and tight losses were the norm for Vanderbilt from the beginning.

The Commodores began the competition with a blowout victory against home-state Wilmington University, 981-853, which was followed by a tight loss to Long Island University, 1029-987. Through the two morning matches, Vanderbilt was averaging a mere 196.8 pins per game, as the team had consistent trouble knocking down its spares—a common theme for the Commodores this season.

Things picked up Friday afternoon, as the next two matches against No. 8 Fairleigh Dickinson and No. 11 Duquesne were easy Vanderbilt victories. The team tightened its focus, the spares started to fall and the scores tallied up for a whopping 308 pin advantage between the two games.

Despite easily breaking the 1,000-point mark in the previous two matches, the Commodores stumbled into the day’s final game against Mount St. Mary’s. The Mount, who went into the match 0-3 on the day, bested Vanderbilt 995-980 for a nail-biting loss.

Though they finished Friday only 3-2, the Commodores held a slight advantage going into Saturday in the average pin count: 203.8 pins per game to 201.1 for second-place Fairleigh Dickinson.

Saturday proved more inviting to the Commodores, as the team swept through a difficult slate of matches with little difficulty to finish the day 4-0.

Vanderbilt started the day with a resounding 979-866 defeat of Adelphi University, a feat which was followed by a relatively closer matchup against No. 12 Sacred Heart. Despite garnering its lowest pin total of the qualifying matches with 939, the Commodores still managed to hang on against a torrid-shooting Pioneers squad for a 41-pin victory.

Much in the same fashion as the day before, Vanderbilt picked up its play in the afternoon matches, notching impressive 1,059 and 1,053-pin totals that sealed easy wins against St. Francis College and No. 5 North Carolina A&T. Having been given a bye round to finish the day, the Commodores finished the qualifying matches 7-2.

Vanderbilt entered bracket play on Sunday as the No. 2-seeded team with a chance to qualify for the title game with a victory against No. 1-seeded Sam Houston State. Though the Commodores mounted a furious comeback in the best-of-seven series, taking a 1-3 deficit to a winner-take-all game seven, they were unable to get it done in the end. 275-248 was the score for the final game, as Vanderbilt fell just short of the automatic title game qualifier.

The Commodores found themselves on the opposite side of a comeback in the next matchup, as a 3-1 lead against Fairleigh Dickinson—whom the Commodores had already bested in the qualifying matches—scrambled back to force a game seven. Once again, Vanderbilt could not get it done when it mattered most, and the team fell 210-205 in the final game.

Now down to 7-4 on the weekend, the Commodores headed into the final match of the tournament with a shot at finishing third. All that stood in their way was a rematch against North Carolina A&T—who, once again, they had beaten the day before. And yet, for the third time in a single day, Vanderbilt found itself coming up just short in a game seven—this time 235-222.

Despite going 0-3 in bracket play, Vanderbilt’s strong performance in the qualifying matches allowed it to finish in fourth place at the competition. The Commodores will have the rest of the semester off, and will resume play on Jan. 8 in Las Vegas, Nevada.