We sat down with Vandy alum and producer Eli Sones of Big Bootie Mix fame. 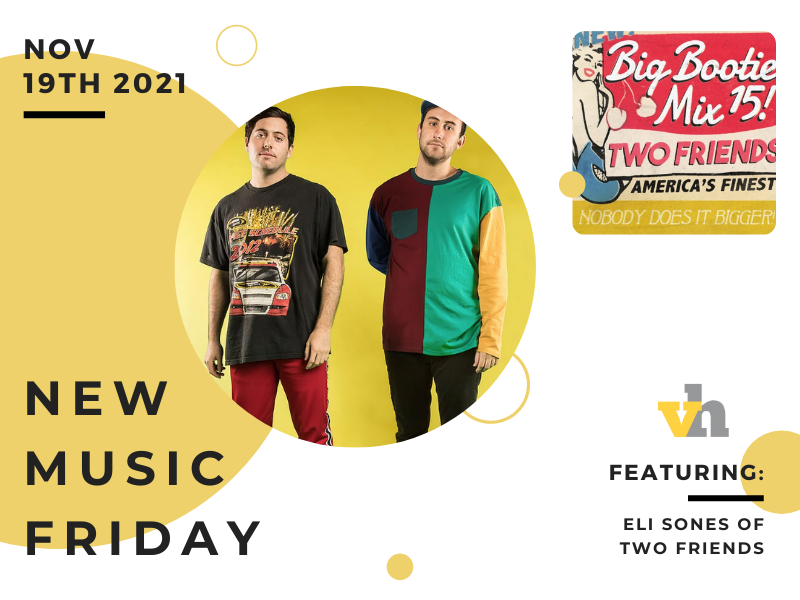 Thanksgiving Break is on the horizon, but it's still New Music Friday!

If you have ever attended a function at Vanderbilt in the last five years, you have most likely heard a Big Bootie Mix blasting over the speakers.

Nearly all of Two Friends’ Big Bootie Mixes have over a million plays on Soundcloud, with their most popular mix reaching 17.9 million plays and others following in line with 14.9M,10.2M and 10.6M plays. These mixes have achieved these impressive stats for good reason: each features songs that were big hits at the time of release and are blended together in an easily danceable format.

Personally, I was introduced to the group in an Uber drive on the way to a concert at the Brooklyn Bowl. I am not typically one for filling the silence of an Uber ride, yet I couldn’t help but ask the driver what he was playing that featured such a good blend of current hit songs. He said it was a Big Bootie Mix and that the creator was actually a Vanderbilt alum—did I go there? Did I know the group?

I did. And I knew I had to get in contact with such a talented Vanderbilt alumnus for New Music Friday. Eli Sones (‘15) of Two Friends let us in on the history of the group, stories from Vanderbilt and how the group is continuing to influence and shape the modern EDM and dance music genres.

Eli Sones and Matthew Halper’s music career as Two Friends is not a new adventure—the pair have been working and creating together since childhood.

“We grew up together in Los Angeles, we went to middle school and high school together so we’ve been best friends since we were 12 years old … at the very end of high school, second semester [of] senior year, we just had some more free time … so, on a whim, we [thought] it [could] be fun to mess around and make some music together,” Sones said.

Attending two different top 20 universities did not change the pair’s bond and desire to continue to make music together after graduation.

“During college is kind of where we built the whole foundation of it all on video chatting and screen sharing every day pretty much,” Sones said. “And it got to a point, by the second half of college, junior/senior year, things were really starting to pick up and we knew that we had to give this a shot.”

Although the two pursued non-musical majors—Sones majored in HOD at Peabody College—they utilized aspects of their education, their drive, and the resources of their collegiate locations, including opportunities unique to Music City, to hone their musical talents while in college.

Sones mentioned that he took a few elective classes at Blair in addition to using the recording spaces available on campus to create the first few original tracks produced by the duo. He also utilized Vanderbilt a cappella group singers and choir members to help create powerful vocals for some of their early tracks.

One such track featuring a Vanderbilt vocalist, entitled “Emily” has over 16 million plays on Spotify and remains one of the group’s most popular tracks. The track’s vocalist, James Delaney (‘15), appeared on American Idol while attending Vanderbilt and later led the popular Vanderbilt a cappella group The Melodores.

Two Friends, currently most recognized for their Big Bootie Mixes, have never stuck to just one genre of music-making.

“We make original music, we remix other people’s songs, we make mixes, we have our radio show [on Sirius XM] and a podcast, we make video content so we like just doing it all,” Sones said.

Regarding their creative process, Sones attributed their smooth collaboration to their history as best friends.

“Even when we’re working on separate things throughout the day, we’re always collaborating and doing it together. So, we’ve got a really good workflow and it makes it easier that we were best friends for so long first since we know each other so well,” Sones said.

“In terms of starting dance music and DJing, I would say Avicii was probably one of the biggest ones at the time,” Sones said. “When we started in 2011 is right around the time he was blowing up [and] becoming popular in the U.S.”

Additionally, Sones commented on the accessibility of the EDM genre as a push for them to remain committed to making mixes.

“You didn’t need a lot of equipment or physical space, you didn’t need to form the whole band. You just have your laptop, and there were very, very few barriers to entry,” Sones said.

Sones’ advice for Vanderbilt musicians, producers, and songwriters who are nervous about committing to or entering the professional musical space reflects the duo’s can-do attitude.

“The key that we found is: make it fun and put in the hours, and they work hand-in-hand. The more you have a good time making music and creating, then you’re going to naturally want to put in the time,” Sones said. “When you put in the time, good things happen and it stays fun.”

He emphasized the luxury of having a Vanderbilt education to fall back on.

“We have a valuable education and there’s going to be other opportunities [if we fail]. We can still do it as a hobby or you know, whatever it is so I think I think people considering it I think it’s absolutely worth a shot,” Sones said.

For those interested in seeing a Vanderbilt music alumnus live, the group is headed back to Nashville on Jan. 20 for a live performance at Marathon Music Works.