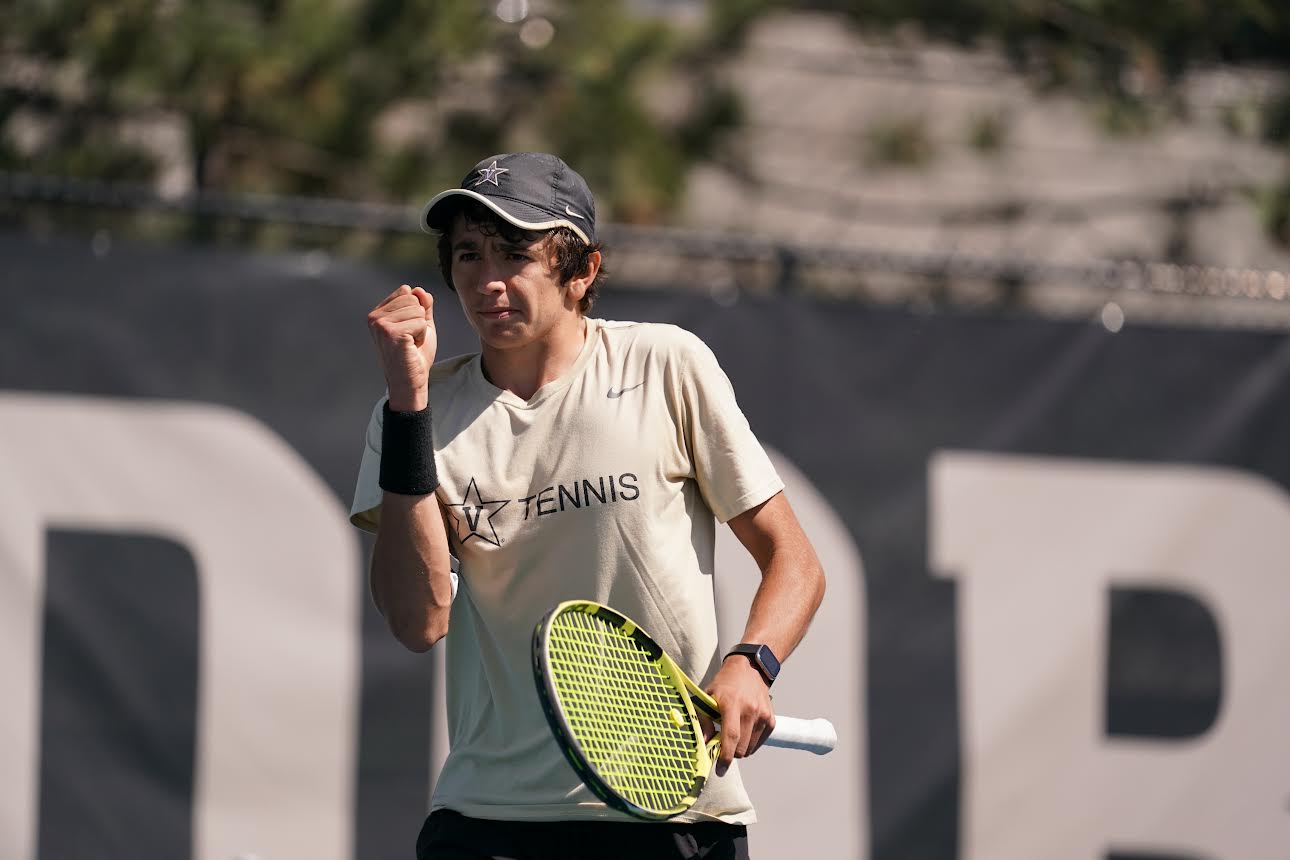 Joubert Klopper: From the small town of Bloemfontein to the big city of Nashville

After the COVID-19 pandemic cut his freshman season short, Joubert Klopper has returned to the tennis courts with pure determination the past two years.

Vanderbilt junior Joubert Klopper began playing tennis when he was just five years old in his hometown of Bloemfontein, South Africa. He first played with his father, at the courts that they had at their house.

“I played a lot of sports when I was younger,” Klopper told The Hustler. “I started taking it [tennis] seriously around age 11.”

Klopper’s father didn’t just introduce him to tennis, however. He helped kindle the flame that was his son’s fondness for the game.

“My dad was my first role model,” he said. “He was very involved in sports.”

Like any great athlete, Klopper had other mentors as well, including his coach from the age of 11 to 18, Gustav Fichardt. Fichardt was a former tennis player also from South Africa, who actually qualified for the 1988 Wimbledon Singles tournament. Unfortunately, Fichardt lost in his first match. In 2016, Fichardt was appointed to the board of Tennis South Africa, a nonprofit organization that donates its proceeds to the development of the sport in South Africa.

“Gustav was an unbelievable mentor and coach for me,” Klopper said.

One of the most overlooked factors of being a successful athlete is the importance of having advisors and trustworthy figures to continue to inspire, and Klopper had that with both his father and Fichardt. He has been able to not only motivate Klopper, but also teach him many of the skills he needs to succeed. Sure enough, it was that same mentor that inspired Klopper that first introduced him to the Commodores’ tennis team.

“Gustav knows Ian [Duvenhage] very well, and I started getting recruited [to Vanderbilt] through that,” Klopper explained.

From there, it was history. He joined the team in January of 2020, going undefeated at home before the season was cancelled due to the COVID-19 pandemic. Despite getting his first year on West End cut short, Klopper has had nothing but a positive experience in his first American home.

“It’s one of the best cities I’ve ever been to,” Klopper said. “I love Nashville. It has great restaurants and great places to go. Specifically, The Chef and I is phenomenal.”

Klopper certainly loves being in the city of Nashville, but on top of that, he loves being a Commodore.

But being 8,500 miles from home still wears on the now-junior—as it does on many of us when we are distanced from home. He loves the warm, welcoming environment of the small town that he grew up in and the supportive community of Bloemfontein, where he knew that everyone wanted him to succeed.

“I liked the close-knit community,” he said. “Everyone was always curious about how I was doing.”

He’s found a similar level of community with his tennis team at Vanderbilt, noting that the team boasts terrific camaraderie and support.

“Our tennis team is like one big family,” he explained. “We’re really involved in each other’s lives.”

He also said that he’s benefited greatly from the coaching at Vanderbilt, and it shows through the results of his first two seasons. Klopper has had a very successful career as a Commodore, with his record through his first two seasons sitting at 18-13, with 17 of those wins coming from singles matches.

“I’m playing both singles and doubles this season, but I normally play singles,” he said. “I prefer singles over doubles. I want to play professional tennis one day, and the market for singles players is better than it is for doubles players.”

A lot of Klopper’s success in matches comes from his toughness and persistence on the court.

“In general, I’m tough to beat,” he said. “I compete very well, and my opponents know they will be in for a battle against me.”

“I would say that he competes very well, and in particular, he doesn’t take points off,” Duvenhage said. “A lot of tennis players will take points off when they feel like they’re out of the games. He competes hard for every point. There’s an effect where it makes the opponent feel like there aren’t free points, and they have to earn them, which is fatiguing.”

Duvenhage feels that Klopper has an incredible motor, and his desire to succeed and reach the next level is impressive. When Klopper first arrived at Vanderbilt, his forehand was considered a weakness of his game.

“Now, you can make the case that it [his forehand] is stronger than his backhand.” Duvenhage said.

Klopper feels similarly. He no longer views his forehand as a weakness. In fact, he feels that he can dominate the game with his forehand. His favorite shot is a forehand approach shot.

“I like it when the ball is short to my forehand,” he said.

It’s a fantastic weapon for any tennis player because it allows them to get on the attack and control the point. This is the perfect shot for him as he works on getting up to the net more often.

In terms of the improvements Klopper is working on, Duvenhage feels mastering volleys and putting games away at the net is the most important thing for Klopper moving forward. They both know that as a young player, he has more work to do to improve his game and achieve his goal of playing professional tennis.

“There are a number of things we’re working on, not just strategically, but also mechanically,” he said. “He’s improved his serve and his return of serve a great deal in the past few months.”

Like many star athletes, Klopper has a pre-game routine that he likes to stick to. Some athletes will have specific music they like to listen to. Others will wear a lucky shirt.

“I normally text my family to tell them who we’re playing against,” he said. “I always wear two pairs of socks and spandex.”

Klopper, who’s now a junior, had a terrific fall season. In singles, he went 12-3, and his overall doubles record was 8-2. Klopper had the most impressive performance of his career during the Commodore Invitational from Oct. 15-17. He went undefeated through the weekend, dominating in singles and doubles. He and Marcus Ferreria won all three of their matches, and Klopper cemented his status as a rising star in singles with two ranked victories coming against the No. 26 and No. 76 players in the nation.

Klopper’s outstanding 12-3 record has put him on the map and taken him one step closer towards his dream of playing professionally. He’ll look to continue to build during the spring season, which begins on Jan. 29.