Clark Lea, Jerry Stackhouse and Candice Storey Lee all met with the media on Tuesday to review recent Vandy United announcements and discuss the future ahead as football season winds down and basketball season picks up. 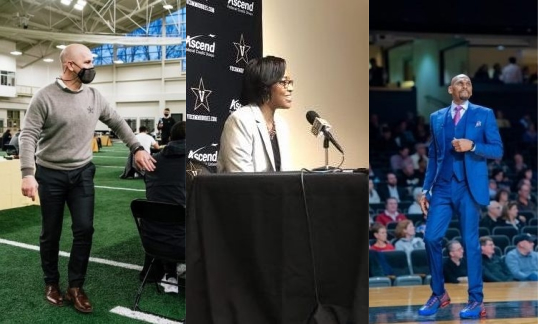 It was a busy day for the media Tuesday on West End as football coach Clark Lea, men’s basketball coach Jerry Stackhouse and athletic director Candice Storey Lee all met with the media.

In Lea’s usual weekly press conference, he previewed Vanderbilt’s upcoming road game against Ole Miss. Stackhouse spoke about his team’s first two victories and a matchup with VCU on Wednesday. And Lee discussed her evaluation of Lea’s first season on West End and answered more questions about recent Vandy United facilities renderings.
Football: Clark Lea on injuries, Candice Lee evaluates the season
Vanderbilt dropped its fifth consecutive game this past weekend against Kentucky and, at just 2-8, still sits in search of an SEC win.

The road won’t get any easier, however, as the Commodores are headed to Oxford, Mississippi, to battle the No. 10 Ole Miss Rebels without some of their most valuable players. Vanderbilt’s head football coach has been managing a slew of injuries and he confirmed that the team will be without Daevion Davis for the remainder of the season as he requires season-ending surgery. Davis left this past Saturday’s game with an apparent leg injury.

“We hurt when Daevion hurts,” Lea told the media. “He has been a heartbeat and one of the main arteries of the team since the beginning. He’s a captain. I can’t say enough about his level of investment and sacrifice for this program. It was hard for me to see him in pain on the field.”

The Commodore quarterback situation has been another hot button topic of late. After missing a trio of games, Ken Seals took back the starting role this past weekend. Seals went 12 for 17 for just 87 yards and threw one interception before leaving the game with a leg injury. Mike Wright relieved Seals and helped the Commodores win the second half, 14-3.

“Ken is going to be day to day this week. I don’t see the injury impacting availability, but certainly got to see how he responds in practice,” Lea said of his sophomore signal-caller. “It could impact performance, so we’re going to keep an eye on that as the week goes. We’ll determine who the starter is later in the week.”

A matchup with the Rebels is sure to be a difficult one for Vanderbilt. Ole Miss quarterback Matt Corral has been a Heisman Trophy candidate most of this season and has racked up the third-most yards among SEC quarterbacks compared to just two interceptions.

“You’re dealing with a high-octane offense that has obviously proven through the season to be explosive… They have a good scheme and design that stresses you with tempo. Those are things that create exposure, and we have to limit exposure,” Lea said. “We can’t allow Ole Miss to get rhythm, and we certainly can’t afford to turn the ball over and do things that get them more possessions in the game.”

With just two games left on its schedule and a difficult losing streak trailing them, Vanderbilt has little time to claim that elusive SEC victory. Lea was asked about the morale of his group considering the difficult circumstances and remained confident in their focus and buy-in.

“We’re a work in progress. This is still Year 1 in a rebuild. But I don’t know what evidence that we need more than the fact that we came out in the second half of a game that was 31-3 at halftime and we scored 14 points and they scored three,” Lea said. “’Are they interested in continuing along this journey and this process?’ The answer to that is absolutely. Does that, in and of itself, turn our results? No. We have to address that 21-point swing in the second quarter and know that, again, our margin for error is so small.”

Lee was also asked about how she evaluates her first-year head coach in his first season. While the results on the field haven’t been up to her standards, she reiterated the sentiment of her fellow former Vanderbilt graduate: winning takes time, and this is a process.

“I said from the very beginning, and I’ll be consistent with this, that he’s coaching culture right now. That’s the foundation for us to have sustainable success, and I would rate him very high on coaching culture. So don’t misinterpret that when you report it and say I don’t care about wins, because I do,” Lee said. “But we have to have a foundation in order to have the success that we will all soon enjoy. We’re not going to take shortcuts. It will take some time, and I have to remind myself that, because we’re all competitors.”
Men’s Basketball: Jerry Stackhouse’s thoughts on opening victories, VCU on deck
Jerry Stackhouse and the Vanderbilt men’s basketball team have begun their season in style, claiming two 19-point victories over Alabama State and Texas State. But the competition will ramp up this week for the third-year head coach as a pair of NCAA Tournament teams from 2021, VCU and Winthrop, come to town on Wednesday and Saturday, respectively.

First up will be the 1-1 VCU Rams on Wednesday, who will come to Nashville following a 58-44 loss to Wagner this past weekend. VCU boasts plenty of athleticism, however, that the Commodores will need to game plan against.

“VCU is a good team. A lot of SEC teams didn’t make the tournament last year and they did, so that’s why we schedule it because we want to have these types of tests. They have length, they have athleticism,” Stackhouse said. “Our ball security is hugely important for us tomorrow night—not really getting sped up to a team that wants to try and force you into quick shots.”

Thus far this season, the Commodores have made easy work of two lower-level opponents. They are shooting an efficient 36 percent from beyond the 3-point line as a team and have three players—Scotty Pippen Jr., Jordan Wright and Myles Stute—averaging double figures.

Rebounding, however, was a bit of an issue for the Commodores this past weekend against Texas State as Stackhouse’s team surrendered eight offensive boards to a much smaller opponent.

“I think [rebounding is] the key. I think we can guard any action in the country but if you don’t finish it off by going and putting a body on somebody and securing a rebound then it’s all for nothing,” Stackhouse said. “Hopefully, we win the rebounding battle and I think that’ll give us a great chance to win the game.”

The Commodores rebounding woes are in part due to injuries to Liam Robbins and Rodney Chatman. Both figure to start upon their return and Stackhouse offered no further news on the two high-profile transfers. Chatman is about one to two weeks into a four-to-six week injury while Robbins remains out indefinitely.

With these injuries, Stackhouse has taken the time to get all 14 of his remaining active players playing time, with 10 averaging over 10 minutes per game.

“We’re still finding rotations. When you have two guys out, you’re not locked into any rotations right now, it’s just kind of feel,” Stackhouse said. “We are figuring out who’s who and we will continue to do that in our nonconference games and hopefully by the time the SEC rolls around, we’ll feel comfortable with who we can have in our strong rotations and probably by that time Liam [Robbins] and Rodney [Chatman] will be back and that will throw another monkey wrench in there. Good problems to have, though.”

In addition to VCU (119) and Winthrop (160), Vanderbilt has another pair of games against teams outside of the KenPom top 100 on deck in Pittsburgh (168) and Mississippi Valley State (358). Considering Vanderbilt sits at 71st according to KenPom, the Commodores have a nice chance to build on the momentum they’ve created early—and hopefully see more fans in Memorial Gymnasium as the season progresses.

“These guys deserve folks to come out and support them. They work hard and I think they play a good brand of basketball and they’re just going to continue to get better,” Stackhouse said. “[I know] a lot of different factors [go into attending a game] but you’re doing yourself a disservice by not coming out here and checking these guys out because for the ones that have been here, it’s fun to watch.”
Vandy United: Candice Lee provides updates, Jerry Stackhouse shows excitement
The facilities renderings released as part of the Vandy United campaign this past Friday have been extremely well-received by Commodore nation—including its head coaches. Stackhouse offered a few thoughts on the new renderings after Lee indicated that the basketball operations center in the north end zone of Vanderbilt Stadium may be the first thing to come.

“We’re super excited about the new building, Vandy United, everything they’re doing, the commitment that we’ve gotten from the university, and the donors who have stepped up to support those efforts,” Stackhouse said. “It’s just a great time to be here and be a part of this kind of renaissance of what’s happening right now… It’s almost like building a house where we’re looking at plans for what’s going to be in stone for probably the next 40 or 50 years. We’re the ones that are making those decisions.”

Lee has affirmed over the past couple of days that she and the university do not have a concrete timeline on when any of the projects will be completed, but that she is eager to get started this coming year.

“I can tell you that we are going to be as expeditious as we can be. Ideally, if you can get the sequencing down right, it would be great to have a four-to-six month start time between each project. So you start a project and if everything is going as planned, four to six months later you start the next one,” Lee said. “The plan is to actually break ground with construction in the fall of 2022.”

Before construction breaks in the fall of 2022, Lee explained that a number of preliminary steps will need to be completed—including the demolition of Parmer Fieldhouse, which sits adjacent to Memorial Gymnasium and currently has asbestos, and a new power plant which will power much of the new construction in and around Jess Neely Drive.

“The sense of urgency is very high. I think there are some things that we have to take into consideration. Our footprint is very tight—we have to be very thoughtful about temporary space and how we sequence things so we don’t disrupt seasons,” Lee said. “When we say Vandy United, it is about more than just the buildings that we realized the renderings on last week. It’s about every enhancement and improvement that we are making.”

“Any and everything is currently on the table. I think the leading question there is what do we want our capacity to be,” Lee said of Hawkins Field. “We want fans to come back to Hawkins [Field] this year and notice that there has been investment. I want people to know that Vandy United is not just what is far off. It’s about the impact and upgrades and the difference that we can make right now.”