Behind 30 points from Scotty Pippen Jr., Vanderbilt added its second victory of the season on Sunday night, besting Texas State. 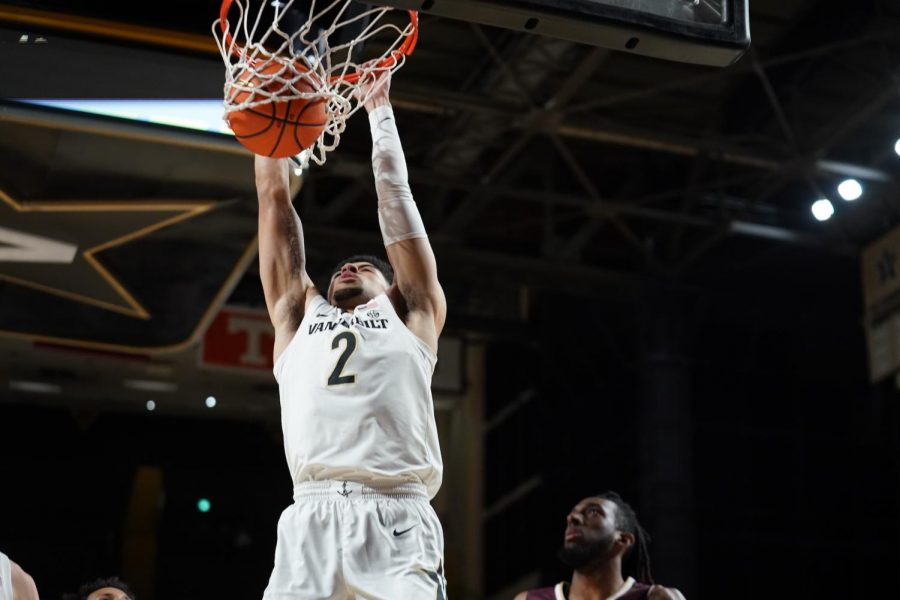 A very busy weekend on West End concluded on Sunday night with Jerry Stackhouse and the Vanderbilt Commodores earning a solid victory over the Texas State Bobcats, 79-60. Behind 30 points from Scotty Pippen Jr. and 16 more from Jordan Wright, the Commodores kept their perfect start to the 2021-22 season intact. Pippen Jr. only had six first-half points before erupting for 24 in the second.

“The main focus for me this year is poise: when to get my teammates open and when to score,” Pippen Jr. said after the game. “Some games I might have 10 points. And he told me some games I might have 40. So it’s picking my spots, taking the right shots, trying to be more efficient, not trying to force anything, it’s letting the game come to me.”

Vanderbilt found its bread and butter early and often on Sunday night, hitting 12 3s in just 27 tries. Pippen Jr. hit four while Myles Stute added to his hot season start by sinking four of his own.

“He worked on his body—really him and Jordan [Wright] both took their physical condition to the next level,” Stackhouse said. “And now you’re kind of seeing what we saw in him all along as a prospect, a guy that can make shots.”

A stretch of seven minutes of second-half game action without a field goal allowed the Bobcats to cut the lead to as little as four, but the Commodores finished the game on an 18-7 spurt that helped them to the blowout win. Vanderbilt used a 9-0 run out of the halftime locker room to balloon their lead to double figures and didn’t look back.

“I thought they came out in the second half and had a really good start defensively,” Stackhouse said. “Turned them over about four or five turnovers in a row and got some got some separation, and we needed it because I mean, that’s a scrappy team, give them credit.”

Stackhouse’s group ramped up its defensive intensity early in the second frame, turning Texas State over a number of times and converting on the other end to the tune of 21 points off turnovers on the night. The usual suspects, Wright and Pippen Jr., ignited the Commodore side early in the second with a number of highlight transition dunks and plays.

It was an inauspicious start for the Commodores as the Bobcats jumped out to a 10-2 run over the first three minutes of the game. But thanks to some timely shooting from forward Myles Stute, Vanderbilt mounted a 13-2 run of its own in the opening frame. That, coupled with nine first-half points from Wright, propelled the Commodores to a five-point lead at the break.

Part of the run was catalyzed by Stackhouse switching to an extended 2-3 zone on defense. The zone forced Texas State into long 2-point jumpers or deep 3s and held the Bobcats to just 34 percent for the game. But for seven second-chance points in the first half, the Commodores’ lead could have been even larger, as a combination of poor defensive rebounding and some favorable Texas State bounces set up the Bobcats for second looks.

In the end, it was a smooth Vanderbilt victory thanks to a lopsided, 47-33 second half.

Vanderbilt will be back in action on Wednesday against VCU on West End, looking to start the season 3-0.