Despite celebrating 30 seniors at Vanderbilt Stadium on Saturday, the Commodores rode a poor first half to a loss against Kentucky. 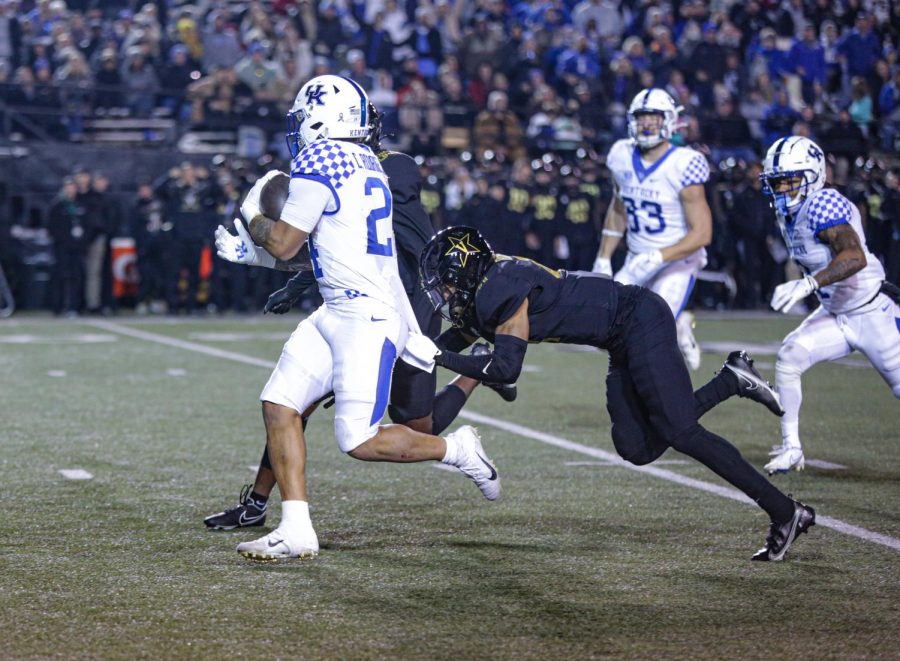 Along with the chill of a Nashville November, a chunk of Big Blue Nation rolled into Vanderbilt Stadium on Saturday to watch Kentucky handle the Commodores, 34-17. Senior day and a blackout were not enough to propel Vanderbilt to its first SEC victory of the season as the Wildcats outscored the Commodores 31-3 in the first half en route to a win.

The 28-point first-half deficit was just too much for Vanderbilt to bounce back from as the Wildcats found just about every way imaginable to put the ball in the end zone early on. Vanderbilt out-gained Kentucky by 26 yards in the second half and outscored the Wildcats 14-3, but it was too little too late on Saturday.

Wildcat quarterback Will Levis began his day completing his first eight passes for 142 yards and tossed two touchdowns for the game. On the Commodore side, Ken Seals reclaimed his starting role for Lea as he returned from a hand injury that sidelined him for the last three games. However, the sophomore did not return for the second half after injuring his left leg thanks to a number of rough sacks in the opening stanza. Mike Wright relieved Seals in the third and ended up throwing a pair of touchdowns while racking up 78 total yards.

Kentucky opened the scoring thanks to a 10 play, 85-yard drive that resulted in a six-yard touchdown catch from Wan’Dale Robinson before the Commodores got on the board.

Alongside Seals, wide receiver Amir Abdur-Rahman received his first dose of meaningful snaps this season and made an instant impact. He helped Vanderbilt get on the board via a Joey Bulovas 48-yard field goal by hauling in three catches in the first quarter. But following the Commodore field goal, Kentucky ripped off 24 straight points while using just 13 minutes of first-half possession.

Levis tossed his second six-pointer of the game to Izayah Cummings just seven seconds into the second quarter before Seals hurled his eighth interception of the season that Wildcat safety Jalen Geiger returned to the house. A five-yard touchdown run from Chris Rodriguez Jr. followed by a Matt Ruffolo field goal capped the first half scoring for Kentucky and made the score 31-3.

Despite an ugly first half, the Commodores played a strong second frame. They added their first touchdown of the game, and a two-point conversion, late in the third quarter on the first drive that Wright played to cut the Kentucky lead to 20. Lea’s squad put together a 12 play, 72-yard drive that ended in a Chris Pierce Jr. touchdown—a nice moment for the fifth-year senior’s last home game. Pierce Jr. also added a peculiar interception at the end of the first half when he was subbed in to defend a Kentucky Hail Mary and finished with six catches and 69 yards through the air as well.

Halfway through the fourth quarter, Wright led another nice drive that set up an Abdur-Rahman touchdown—his first since last year’s season opener at Texas A&M. The senior tallied seven catches for 65 yards and the touchdown on Saturday.

A couple of nice late drives were catalyzed by impressive rushing from freshman Patrick Smith, who finished his day with 84 yards on the ground. In total, the Commodores finished with 266 yards to Kentucky’s 414.

The Commodores will now hit the road for their final two games of the season, with a trip to Oxford, Mississippi to play Ole Miss, up first next weekend.