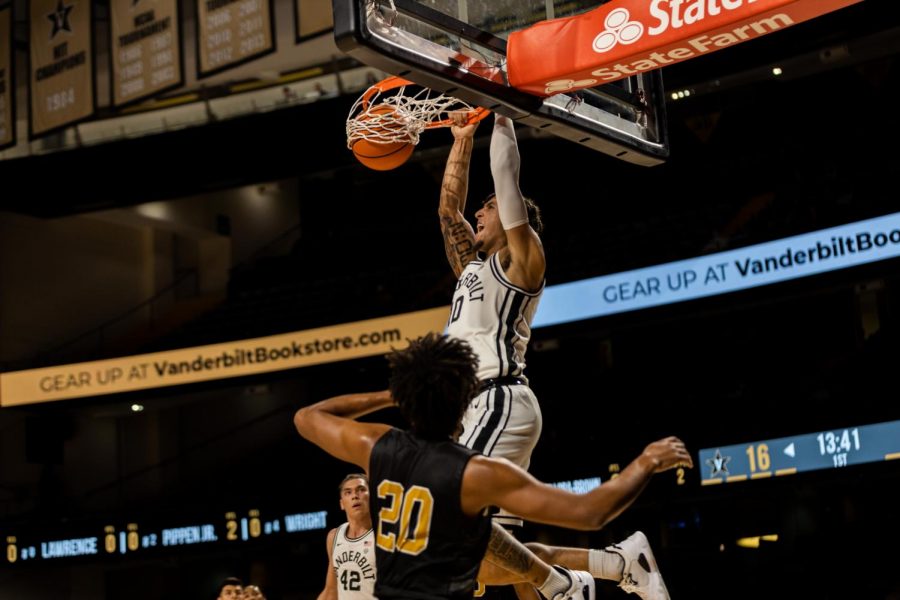 For the fifth consecutive season, the Vanderbilt Commodores got their season started right: with a victory. Head coach Jerry Stackhouse and his squad bested Mo Williams and the Alabama State Hornets 91-72 in Wednesday’s season opener.

The men’s squad capped off a back-to-back at Memorial Gymnasium with a win that brought basketball excitement back to West End. Vanderbilt turned the Hornets over 24 times in the victory and capitalized with a balanced offensive approach that featured eight made 3s, 17 assists and 42 points in the paint.

Stackhouse rotated playing time across all 14 of his active players, with 10 seeing more than 10 minutes of action. Transfers Liam Robbins and Rodney Chatman sat due to injuries, but the former NBA star received solid contributions from his bench and across the board, with four players scoring in double figures.

Perhaps the most surprising contribution came from Gardner-Webb transfer Jamaine Mann. The 6’6″ forward played numerous positions, including center, and totaled an impressive 15 points and 10 rebounds in the victory. He was relentless on the glass, keeping numerous offensive possessions alive en route to six offensive rebounds.

“Jamaine had a big night tonight. He was a presence on the post, he was a presence on the offensive boards and he took his time. He was patient. When he didn’t have something, he was kicking it out,” Stackhouse said of his forward. “I don’t think we’ve had anybody kind of like him. He’s different from anyone we’ve really had.”

Offensively, despite it being Scotty Pippen Jr.’s birthday, it was Jordan Wright and Myles Stute who stole the show early on for the Commodores. Wright scored at all three levels, flashing his sizable growth from last season—especially on the perimeter. The junior finished with 16 points to go along with four rebounds and Stackhouse credited his offseason work as the catalyst for his big opening-night performance.

“He’s taken it to another level,” Stackhouse said. “That dunk that he had tonight—he couldn’t done that a year ago. A lot of it wasn’t his own fault, but I think he really made up his mind that he was going to change his body and him changing his body—he put himself in a great position to be a go-to guy for us.”

Yeah…don't know if he could've done that last year. Wright with 11 points and 3 boards at the half.

Alongside him on the wing, Stute got the start and helped get Vanderbilt rolling early. The sophomore canned a pair of 3s and threw down a ferocious dunk off a backdoor cut in the early going that energized Memorial Gymnasium and jolted the Vanderbilt bench. The Commodores capitalized on a number of Hornet turnovers in the first half to jump out to a 10-point lead by the second media timeout and led by 15 by the first half’s end.

Vanderbilt began the second half on a 10-2 run that ballooned its lead to 21 by the frame’s first media timeout. Pippen Jr. tallied eight of his 15 points in the second half, four of which came via an and-one 3-pointer en route to an easy Commodore win. A somewhat sloppy and walk-on driven final 15 minutes from both squads left the final result 91-72. Walk-ons Drew Weikert, Max Adelman and Graham Calton all saw second-half action for the Commodores, with Weikert contributing five points.

Drew Weikert Threes are the best kind of threes.

Vanderbilt will be back in action on Sunday when it hosts Texas State at Memorial Gymnasium.