Depending on who you ask, Gen Chem might not be as scary as it seems

Weed out class or not so much? All Vanderbilt students have something to say when it comes to one of the biggest weed out classes: Gen Chem. 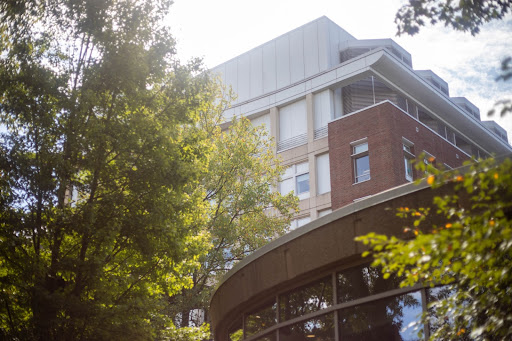 While walking to class the day after the most recent General Chemistry (Gen Chem) exam, I noticed inspirational messages drawn on the sidewalk. These messages, which included “Don’t be your own limiting reactant” and “No electronegativity here,” were directed towards the students that had taken the Gen Chem exam the night before.

It’s easy to tell when there’s a Gen Chem test on the horizon—the week leading up to each exam, a negative aura pervades the air on campus as students anxiously await for the exam to be over with. As an education major, I thankfully do not have to worry about the terror of AXLE requirements or Gen Chem. After observing my peers chugging endless amounts of Suzie’s coffee and pulling countless all-nighters in Stevenson, I began to wonder: is Gen Chem really that difficult? Is it meant to weed out ambitious pre-med students?

A notoriously difficult class, Gen Chem is a requirement for all students on the pre-med track. I spoke with some first-year students to find out if Gen Chem truly is all that bad, and overall, the general consensus is that while Gen Chem is super difficult, you will be fine as long as you study and do the homework. But what exactly does “fine” look like?

“The content heavy lectures, weekly homework problem sets, labs, discussions and stress from the upcoming exams make Gen Chem a pretty stressful class,” Sidney Amsalem, first-year neuroscience major on the pre-med track, said. “That being said, I believe it is very manageable if you have a good support system, whether that is office hours from your professor, discussion TA or study groups with friends.”

Other students agreed: as long as you go to class and do your homework, the class is not too bad. There are various professors who teach the class, along with a myriad of TAs. Students recommend visiting Rate My Professors to see past reviews of current professors.

“If you study a lot, the class is not as hard as people make it out to be,” first-year student Briley Porter—who is undecided on a major, but on the pre-med track—said. “Dr. Phillips is also very helpful and a wonderful professor.”

Those complex terms and concepts are difficult to learn in the physical classroom, but many students in the classes of 2023 and 2024 were forced to learn online due to Covid-19 restrictions. The typical guidance from study groups and TAs were not accessible, making it even more difficult to power through the complex assignments and large course load.

“Taking Gen Chem completely online was definitely very challenging (not just the concepts, but actually learning via Zoom). I already had a hard time understanding the concepts, so it was even more difficult when class was online,” sophomore Paige Olson said. “Also, since I didn’t know anyone in that class freshman year, I had no classmates to ask for help and was way too nervous to ask the professor for help. We had Gen Chem discussion with TA’s, but it wasn’t really helpful because the entire time we were just trying to cram in all the practice problems, which added even more stress to the class.”

Those who are not required to take Gen Chem typically try to avoid it. While a four-hour lab science is a liberal core requirement for Peabody students, they tend to shy away from Gen Chem, opting for other classes to satisfy the requirement.

“When someone says ‘Gen Chem,’ I think of an intense class for students who want to be people in STEM in the future. Other people’s experiences have definitely reaffirmed my ideas of never taking Gen Chem,” Emily Feingold-Fisher, a first-year secondary education and English major, said. “I am going to take other science classes to avoid Gen Chem. I am still figuring out which classes are best for non-STEM majors.”

Other STEM majors who are not pre-med usually avoid Gen Chem and seek out other classes to fulfill AXLE. The negative stigma around the difficulty seems to pull students away from the challenging course.

“Hearing what Gen Chem students are saying makes me think, ‘Well, I dodged a bullet,’” Stephan Bellamy, a first-year English and communication of science and technology (CSET) major, said. “As a non-STEM major, I don’t need to take Gen Chem unless I want to for fun.”

From the outside, Gen Chem seems super scary. However, the brave souls that have conquered the 8 a.m. lectures report different findings. Develop a relationship with the TA and professor, take excellent notes and develop a study group, and it will be a little easier to breathe. Make like a proton and stay positive!