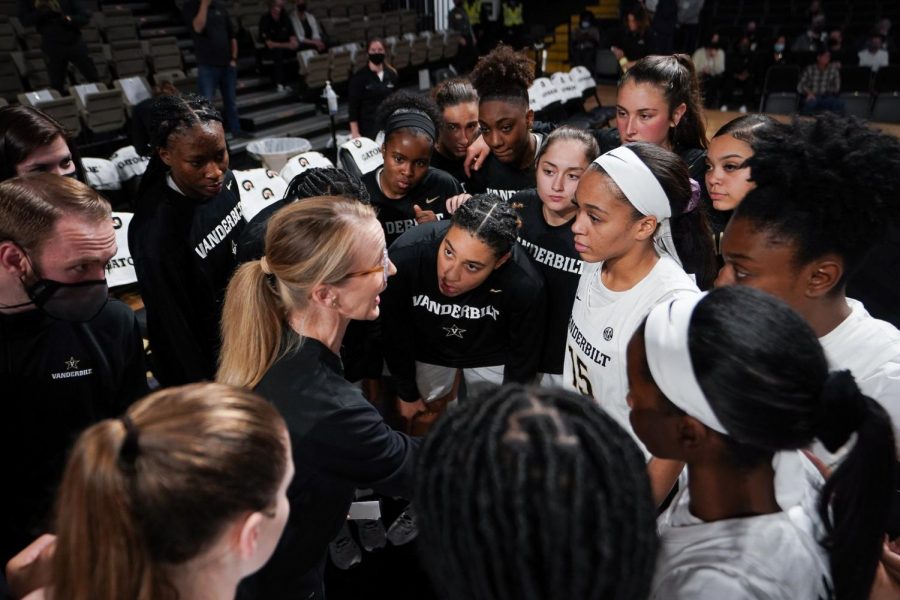 Vanderbilt basketball huddles during its victory over Gardner-Webb on Nov. 9, 2021. (Vanderbilt Athletics)

In both Vanderbilt and Gardner-Webb’s opening game of the season, Vanderbilt earned the win, crushing the Runnin’ Bulldogs, 75-59. Brinae Alexander was especially impressive, posting 20 points, seven rebounds, and two assists to lead the Commodores to victory. Though the performance was against a weaker opponent in Gardner-Webb, head coach Shea Ralph can hang her hat on this first contest, as her squad dominated the matchup on both sides of the floor.

“I’m just really happy for our team,” Ralph said. “They’ve been through a lot. Each one of them individually has a story that’s incredible. And since the moment that I walked on campus, they have worked so hard for me, for our staff, and it was just really great to have to see them have some success tonight.”

Vanderbilt led from the get-go. They opened the game by going on a 14-3 run, with all 14 of their points coming in the paint. In the first quarter alone, they totaled five steals and led the rebound count, 11-3.

The second quarter was more of the same for the Black and Gold. They continued to find their way into the paint and scored easy buckets. In fact, by half, they had put up 24 points in the paint—compared to Gardner-Webb’s four—and were 9-11 from the free throw line.

The most telling statistic for both teams was three pointers. Vanderbilt only shot two three pointers—the team had no need to put up lower percentage shots when layups were readily available. Conversely, Gardner-Webb put up 14 three point attempts and went just 3-14 on those tries. This was due to good team defense by the Commodores as they forced the Bulldogs to take tough, outside shots, often with a hand in their face.

Coming out of the first half, the Commodores led 37-22, though an eye test will tell any fan that the Commodores were much more dominant than the scoreboard read. The second half further cemented that dominant performance.

In the third quarter, game trends persisted, widening Vanderbilt’s lead to 20. The Commodores continued dominating the boards, out-rebounding the Bulldogs 36-15 by the end of the frame, and expanded their offensive arsenal, now shooting—and making—more threes. They went 4-5 beyond the arc in the quarter and held their opponent to just two makes on six tries from long range.

“Make or miss, just keep shooting—that’s what we say,” freshman Kendal Cheesman said. “We have some really good shooters on this team. And for everyone, we’re always like ‘keep going, keep making it, keep taking it,’ and they fell, so I’m proud of how it went.”

The game closed out quietly as Vanderbilt kept its strong lead and left Memorial with a final score of 75-59. They maintained their quality play and earned the win for Ralph’s first regular season victory.

Brinae Alexander was the offensive star of the game. She went 8-18 from the field, putting up 20 points and a team-high plus-minus of +23. Defensively, Jordyn Cambridge stood out on the floor. Playing in her first regular season action since her sophomore campaign due to a season-ending knee injury last year, she didn’t show any signs of rust. She was vicious on the perimeter, causing turnovers and breakdowns in the Bulldogs’ attack. She also put up ten points and three assists to help the Commodores’ offensive effort.

“We talk a lot about our growth mindset, our leadership abilities, our integrity with each other and how we can be better,” Ralph said. “[Brinae Alexander and Jordyn Cambridge] challenge each other to do that every day. And because they do it, they can challenge their teammates.”

Though this was an out-of-conference tune-up game for Vanderbilt, it was still Ralph’s debut, which made it an all-important matchup for the program. Her group was poised, organized and well-coached. The win never seemed to be in jeopardy, as Vanderbilt remained calm even when the ball didn’t bounce their way—which wasn’t often. Considering Ralph’s mentality and ambition, she’ll doubtlessly go back to the film and find mistakes to address and plays to critique, but for now, Commodore fans can rejoice in a successful opening to the 2021 season.

Vanderbilt, looking to start its year 2-0, plays its second home game of the week this Friday, Nov. 12 at 7 p.m. CST as they take on the University of Arkansas at Little Rock Trojans.