Vanderbilt head coach Jerry Stackhouse and forward Jordan Wright met with the media Tuesday in advance of the Commodores' season opener on Wednesday. 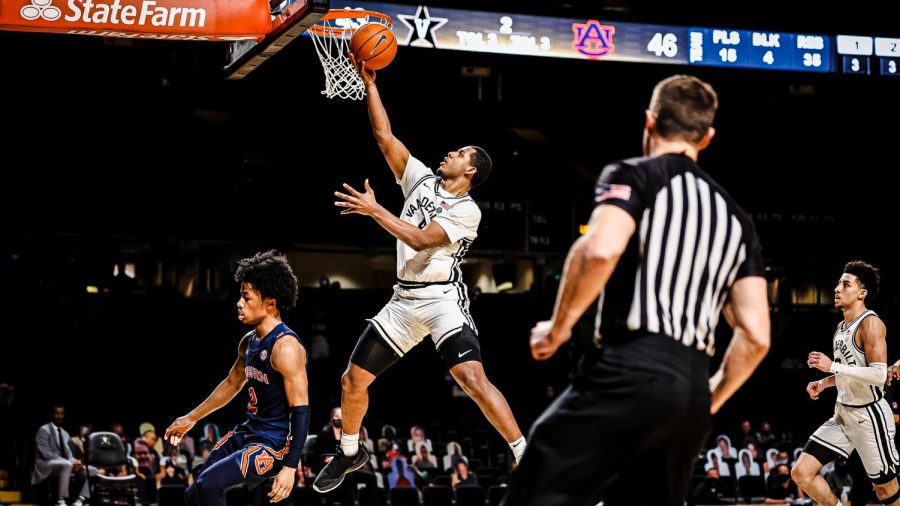 Vanderbilt forward Jordan Wright goes up for a layup against Auburn in Vanderbilt's 2021 matchup with the Tigers. (Vanderbilt Athletics)

The third year of the Jerry Stackhouse era begins on Wednesday as the Vanderbilt Commodores welcome Alabama State to Nashville. Stackhouse and forward Jordan Wright met with the media on Tuesday to provide their final thoughts before tip-off.

“[I’m feeling good]. Excited to finally get here,” Stackhouse said. “Seems like a long time coming the whole season, with no fans so we are excited to get a good start. Our guys have been working extremely hard all summer, all fall and it’s finally here so we’re ready to get going.”

As his team prepares for its opening contest against the Hornets, defense will be top of mind for the head coach. Last season, Vanderbilt boasted just the 136th-ranked defense in the country per KenPom. With a full offseason of improvement and a number of new athletic pieces, Stackhouse expects big things from his defensive unit and hopes to see a disciplined offensive approach as well.

“Defensively, I just want to see us be tied together. Really come out in our traps and being aggressive making sure our rotations are there. That we’re challenging every shot,” Stackhouse said. “That we’re sharing the ball. Offensively, I think we’ll be able to get the shots that we want, but making the extra pass and getting great shots and not good shots—those are the things I want to see.”

Two defensive pieces that Stackhouse will be without tomorrow night will be transfer additions Liam Robbins and Rodney Chatman. Stackhouse confirmed last week that Chatman injured his meniscus and will be out for four to six weeks. But the head coach updated the media on Robbins’ status, explaining that he experienced a bit of a setback in his recovery from a foot injury.

“I don’t think it’s season ending. But I think it’s one of those things where we don’t really know a timeline on it right now,” Stackhouse said of his center. “He was working out, everything’s ramped up pretty good and then felt a little something and got an MRI. Just like a stress reaction.”

The seven-footer is now in a boot, according to the head coach, and is dealing with a stress-related issue in his foot. Stackhouse clarified that it’s not a stress fracture and that him and the staff have certainly not ruled Robbins out for the season.

“Obviously a little disappointing with the news today. But we’ll see. We’re not jumping to the conclusion to say it’s definitely season-ending,” Stackhouse said. “Hopefully we can get it calmed down and get him back on track, but right now, we’re going to focus with the guys that we have and hopefully he’ll join us sooner rather than later.”

As far as the starting lineup goes, Scotty Pippen Jr. and Wright were almost guaranteed starters even with injuries to Chatman and Robbins. At the power forward, Myles Stute and Terren Frank have been battling, but Stackhouse alluded to Stute getting the nod first in what he called a “fluid” situation.

In Robbins’ and Chatman’s absence, Commodore fans can expect Tyrin Lawrence and Quentin Millora-Brown to fill the final two starting positions. Wright has been impressed with Lawrence in the early going as he recovers from a knee injury.

“Tyrin has been a really big addition [this year],” Wright said. “He really knows how to get downhill, use his speed, his quickness. He’s also a menace on defense. He gets in passing lanes and is really athletic.”

Bench contributions will be important for this squad as well. Stackhouse named Trey Thomas as someone who would be in line for a large role in the second unit while Wright tabbed freshman Shane Dezonie as someone who could possibly contribute early on. Regardless of rotations, Stackhouse and his squad are ready to take the new season by storm, beginning tomorrow night against Alabama State and its head coach, former NBA All-Star Mo Williams.

The Commodores and Hornets will tip-off at 7 p.m. CST at Memorial Gymnasium on Wednesday.