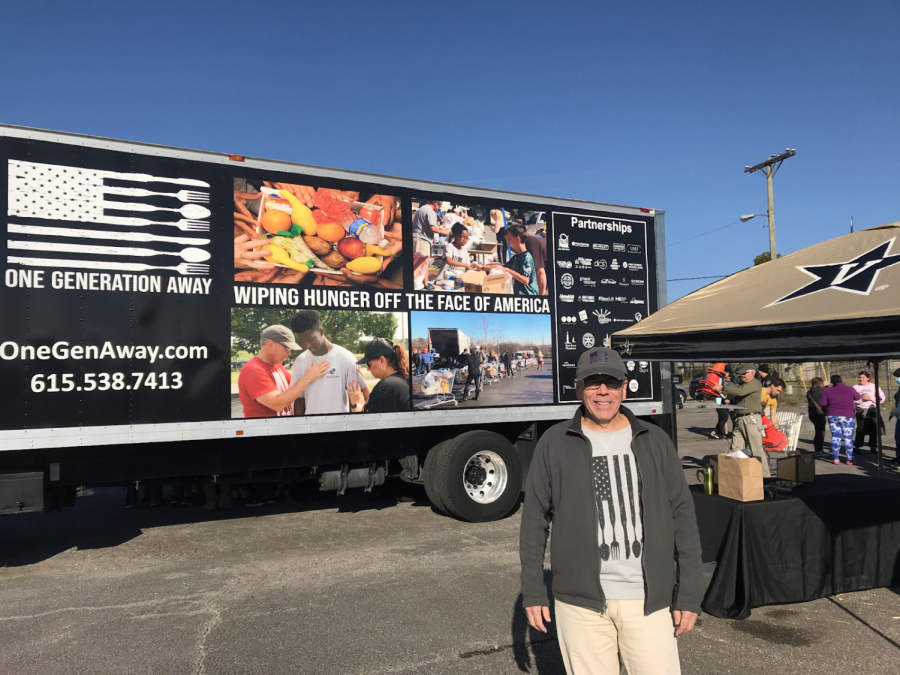 Amelia Cephas, a Vanderbilt graduate student, said she appreciated the opportunity to volunteer at the event.

“It was a rewarding experience because I was able to see the smiles on people’s faces,” Cephas said. “I really enjoyed packaging the food and seeing the whole process. I like doing this kind of stuff, giving back.”

Among the other volunteers at the event were representatives from Vanderbilt University Police Department (VUPD) and Vanderbilt Woman’s Club, students in Vanderbilt’s Next Steps program and several other Vanderbilt employees, per Lynn Maddox, program director for community relations at Vanderbilt’s Division of Government and Community Relations. Lydia Howarth, wife of Chancellor Emeritus Nicholas Zeppos and active Vanderbilt community member, was also in attendance.

Maddox reflected on the budding cooperation between Vanderbilt and OneGenAway.

“Vanderbilt University is proud to sponsor two food distributions with OneGenAway: one in the fall, one in the spring. This is the third or fourth one that we’ve done,” Maddox said. “OneGenAway is a great partner because it’s very well organized. It’s a great place for volunteers to come and spend a morning handing out food to people in the neighborhoods around Vanderbilt who live in the food desert that’s nearby.”

Chris Whitney, founder and director of OneGenAway, described the breadth of his nonprofit’s mission and emphasized the urgency of food insecurity issues in Tennessee.

“Hunger is a serious issue that goes on every day. [In Tennessee], one in six children don’t know where their next meal is coming from, one in eight in the general population,” Whitney said. “We know there’s a greater need than food. I’m not worried about bringing [people] into a religion; I just want them to know there’s people that care about their needs.”

Whitney reflected on the journey of building his nonprofit into the organized operation it is today, boasting such high profile collaborators as Sysco and Feed the Children.

“We started out of the back of a mid-size SUV. I had this dream: ‘what if we could feed a million people in this mobile food pantry style around the country on a Saturday morning?’” Whitney said. “Now, we’re almost into our 11th year. We did 5.4 million pounds of food last year—over 4 million meals—in three states.”

Whitney elaborated on the operational logistics that allow Saturday morning food distribution events like this one to run so efficiently.

“We’ve figured out how to lay the food out and get it distributed in a real timely fashion,” Whitney said. “In three hours, we give away 12 tons of food: sorted, bagged [and] put in 200-300 cars.”

Whitney said he sees his events as a chance for students to break out of the “Vanderbubble” and contribute to the needs of the greater Nashville community.

“We live a pretty sterile life sometimes. We don’t experience the person that’s in need. Here, they’re right next to you, and you get to talk to them, and I think that’s pretty cool,” Whitney said. “You realize there’s not much difference between us and them. I always tell people we could be on the other side of that table very easily.”

Whitney also highlighted the importance of having a strong relationship with Vanderbilt, something he views as a signal of his organization’s growth.

“From a college perspective, we need to be looking at how we impact our community, not just because of our education but how we can impact them to meet true, physical needs today,” Whitney said.

Maddox discussed her hope to expand the Vanderbilt-OneGenAway partnership to address other needs of the Nashville community in addition to food insecurity.

“We’re hoping to grow this into an event where we can also give away books and diapers,” Maddox said. “It’s not just about giving away food but helping people with all the needs they might have.”

Whitney encouraged Vanderbilt students to volunteer for OneGenAway and discover what other opportunities could arise for them through doing so.

“We only have 10 employees; this is all about volunteers,” Whitney said. “It’s all about what you can learn and how you can creatively effect change in the world. You may not be interested in food, but you may be thinking you want to start a business or a nonprofit, and if I could help with that, I’d love to.”