The team won the race against other nationally ranked teams at the Head of the Charles Regatta rowing competition in Boston on Oct. 24. 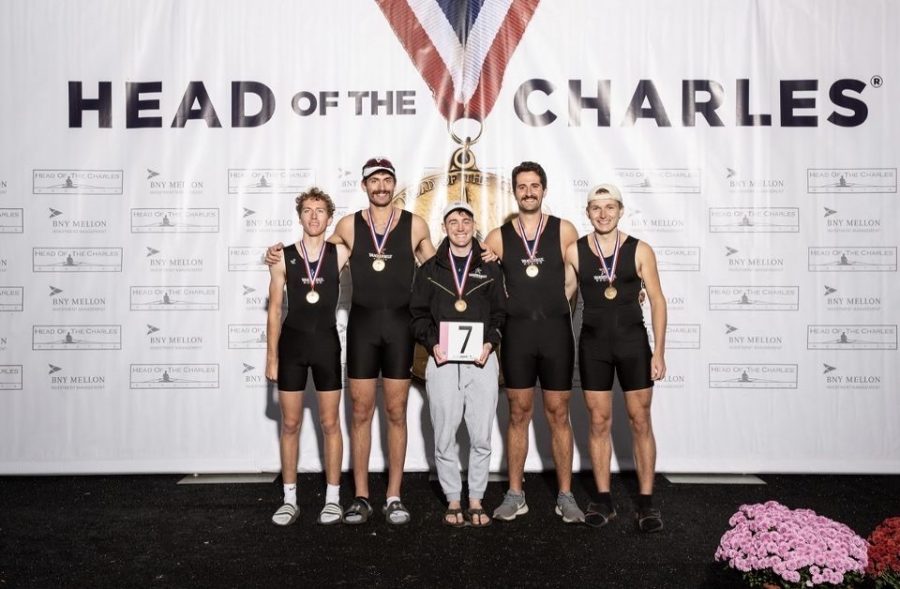 The Vanderbilt Club Rowing winning men's team at the Head of the Charles Regatta, as photographed on Oct. 24, 2021. (Photo courtesy of Danny Ingber)

The Vanderbilt Rowing Club men’s team finished first in the Head of the Charles Regatta men’s collegiate fours in Boston, Massachusetts, on Oct. 24. Forty of the top nationwide rowing teams—varsity and club combined—traveled to compete in the Commodores’ largest event of the season.

After the event was canceled in 2020 because of the COVID-19 pandemic, the Vanderbilt men’s club team qualified to compete this year because of their finish in the top half of the competition in 2019. The Head of the Charles Regatta is considered to be the world’s largest rowing event, attracting over 11,000 rowers and 300,000 spectators to the more than 65 competitions held over the competition weekend.

In the 4,800m course down the Charles River, the Vanderbilt rowing team finished with a winning time of 16:49.708, beating the second-place team from Mercyhurst University by over three seconds. Despite his saying that Vanderbilt had never medaled at the race in its 36-year program history, Head Coach Jon Miller shared with The Hustler that he was confident in the team’s skills and abilities going into the weekend.

“You definitely don’t want to underestimate the field or make any assumptions, but we were pretty confident in the speed we had. We knew what we were capable of; we didn’t quite know what speed everyone else would have,” Miller said. “Our top goal was to execute the race that we’re capable of and then the second goal was seeing if we could put ourselves in contention to come out on top.”

The Vanderbilt winning boat was composed of senior and Club President Danny Ingber, senior Jason Garrett, senior John Misey, junior Adam Levin and junior Connor Goodrich, who steered the boat as the coxswain. The race was roughly three miles long, winding upstream through narrow turns and under six bridges in the city. As it was a staggered timed trial race, teams did not know how they placed in the competition until after they arrived back to the dock with their coaches.

“I felt pretty confident that we had at least medaled,” Ingber said. “It was definitely my top moment on the team, if not my top moment in college. People not getting what we’re trying to accomplish, why we work so hard and why we wake up at 5 a.m. for a club sport—all of that just seemed worth it.”

Ingber also spoke about the greater implications of this win for himself and the club, expressing gratitude for his current and former teammates.

“It was really cool to show the rowing world that a club team like us can play with the big boys, being able to beat programs that get legitimate school funding,” Ingber said. “As a guy that’s been here for four years—seeing the momentum we’ve been able to keep on an upward trend from where I started—it means a lot to be on a team that achieved what we did.”

Miller hopes the team will build on this victory to continue to make strides for the program.

“We try to take the stance that the journey is more important than the end result,” Miller said. “But it’s certainly fun to celebrate the good results and then move on and focus on the future.”