The experimental hyperpop duo taught us on Nov. 3 that all you need to succeed is a guitar, a cool wizard hat, and a camera-enabled Nintendo 3DS. Oh, and the ability to walk the fine—and rapidly disappearing—line between random noise and music. 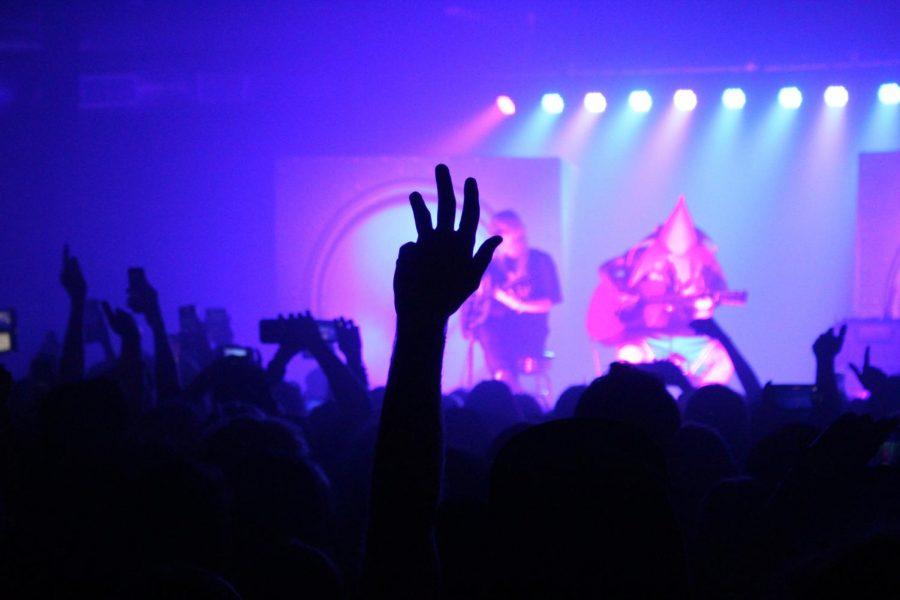 “What is a gec, and why are there 100 of them?” is one of the first related searches to show up on Google when you type in 100 gecs. I’m not going to tell you the answers to either of those questions though. No one is really sure, and anyways, it’s irrelevant.

Because a 100 gecs show is more than any attempted definition. It’s nearly getting hypothermia in a very confusing parking lot line because there were three shows on the same night at Cannery Row. It’s keeping a running tally of every time you see someone wearing fuzzy fox ears or a maid outfit—in public. And of course, it’s filming the show from your Nintendo 3DS, as at least a half dozen devoted fans at the show chose to do.

In more concrete terms, 100 gecs is the abrasively maximalist hyperpop/techno/nightcore project of high school besties Laura Les and Dylan Brady. Hailing from St. Louis, Les and Brady make music that’s like the sticky, disgusting lovechild of a Lisa Frank poster and a vacuum cleaner set to carpet mode. They are the hyperpop trendsetters.

“This is the music I was listening to at the lowest point of my life,” senior Beatrice Mhando, fellow attendee, said. “I was playing Genshin Impact back then. I really wish someone had just punched me in the face instead.”

Needless to say, the show was awful, and it was incredible.

Before Les and Brady paraded onto the stage dressed like “Fantasia”-era Mickey Mouse and the wizard from Stardew Valley, solo hyperpop act Alice Gas primed the audience for the beats to come with some rank beats of her own. Though her set was already half over when we finally made it into the venue, we were amazed at how she had mesmerized the crowd.

Songs from her October album “HARDCORE HEAVEN” seemed to have entranced everyone around us. The extreme electronica sound—of which there was so, so much—was so diverse and all-encompassing that I was surprised when an opening in the crowd revealed she was a solo act. Just Gas sitting there on stage with a laptop. Barely even bobbing her head. That was it.

When the trance faded and Gas departed the stage, I had time to really take in the crowd and notice that fans around us were wielding much more electronic equipment than just Nintendo 3DS’s. Some friends we found had brought a Playstation controller and a Wii wheel, a group in front of us frantically typed into a graphing calculator to stage a photo, and someone nearby would, every few minutes, hold up his phone to display a meme and slowly rotate it like a lighthouse beacon. His charming presentation included an unfortunate reference to Pilk and multiple wide-angle close-up shots of dogs, because I know you were wondering.

Then, after the person directly behind me asked “Where’s my Reddit daddy?”, the lights dimmed, and musical magicians Les and Brady took the stage. Leaving us no room to breathe, they sped through popular hits like “stupid horse” and “ringtone” so aggressively that my friend and I​​ debated whether or not the giant plastic speakers behind them on stage—which looked like something out of Toontown—were functional. We may or may not have arrhythmia now.

While some of the appeal of feral noisecore is certainly, well, just noise, the music snob in me appreciated the fact that some tracks in 100 gecs’ set—like “757” and “fallen 4 Ü”—had lyrics that were a) actually intelligible over the noise and b) pleasantly melodic and catchy. This was to be expected, however, as Les and Brady have mentioned that their upcoming album, “10000 gecs,” will lean closer to mainstream and feature tracks on which Les’ voice isn’t auto-tuned into oblivion.

Show attendees got a sneak peek of this voice when Les unexpectedly brought out an acoustic guitar about halfway through the set, prompting the audience to chant for “Wonderwall.” But today wasn’t gonna be the day when she was gonna throw it back to us; instead, Les wowed and wooed the crowd with a pleasantly mellow acoustic rendition of the infamous track “gecgecgec.”

Normally, this track features more than a minute of random sound effects in a random order—I’m not joking—concluding with a small section of insanely auto-tuned lyrics that sound like they’ve been left in your pocket and run through the wash at least three or four times. Les’ acoustic performance, though? Phenomenal—and probably the first time in many audience members’ lives that they actually stood still for more than 60 seconds.

Ever dedicated to the irony of their bit, however, Les and Brady then announced they’d be performing their version of a “classic country song” before retiring the guitars. Cue rampant audience speculation: would we be hearing a never-before-seen 100 gecs cover of Dolly Parton? Kenny Chesney? Or—gulp—“Old Town Road?”

Thankfully, it was none of the above. Brady proceeded to smash a xylophone (I think—it honestly could’ve been an industrial meat grinder) for roughly 45 seconds, somehow convincing the instrument (or piece of metal) to produce sounds that I don’t think I’ve ever heard or will ever hear again. There was much applause.

After a few more bangers, including some unreleased tracks from the anticipated album, Les and Brady ended on a high note: their most well-known song, “money machine,” which had us genuinely worried the floor might collapse. Then they encored on two other high notes: “what’s that smell” and “800db cloud,” both of which I, embarrassingly, recognized only from having heard them in memes. That was a disturbingly common theme of the night.

But it’s also what made the show so unbelievably fun, despite my steadfast refusal to listen to 100 gecs in my free time. Looking around at the audience and all their cat-ear headbands as Les chanted “what’s that smell?” into the green fog above the stage, I had only one thought: never have I been so proud to be a normie.