The Commodores’ fall season came to a close with impressive singles and doubles performances. 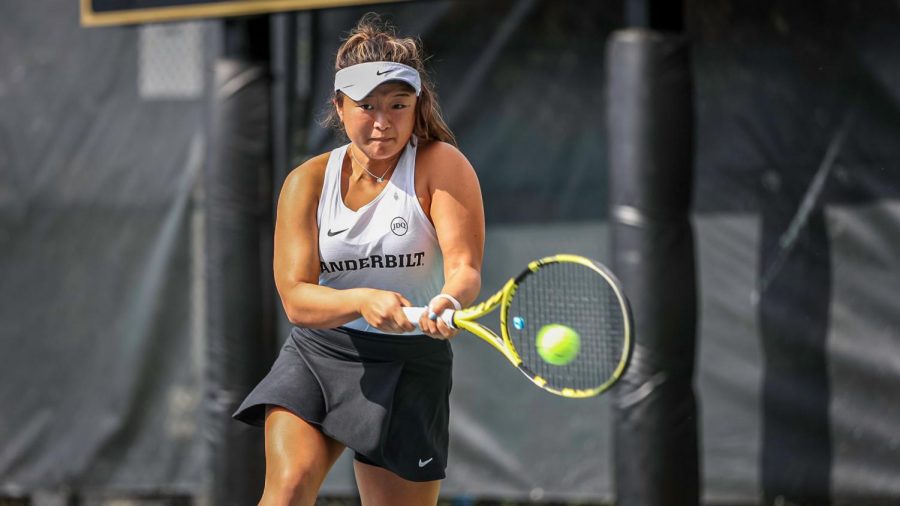 Vanderbilt women's tennis competes in preparation for the ITA Regionals in 2021. (Vanderbilt Athletics)

This past weekend, the Vanderbilt women’s tennis team competed in the University of Tennessee’s Fall Invitational to cap off their fall season. With strong performances in singles and doubles matches, the Commodores came out strong on the first day of the invitational and kept their momentum throughout the weekend. Overall, the Commodores came away from the weekend with a solid performance heading into the winter offseason.

Amongst the strong performances across the board on day one came from MaryAnn Rompf, who won her doubles match alongside junior Dasha Kourkina and dominated her singles opponent, Illinois’ Emily Casati, 6-0, 6-0, for her second victory of the day. Rompf’s performance came much to the delight of head coach Aleke Tsoubanos, who spoke after the match about what makes the fifth-year senior so effective on the court.

“MaryAnn is a true competitor. She isn’t afraid to work and make a match physical. She’s also very receptive to coaching during matches and willing to make changes to get results,” Tsoubanos said. “Her toughness and competitive spirit is among the best on the team and her experience as a fifth-year student-athlete will be a huge asset for us.”

In addition to Rompf’s performances, the doubles pairing of Anessa Lee and Holly Staff performed very well, with two commanding victories. The combination built off of their strong showing at the ITA Regional Championships, where they won three matches and earned a quarterfinals berth. Even though they were not originally partners to start the fall season, they seem to have hit their stride as the season has come to a close.

“They have a combination of power from the back and ability to run formations but also to defend. We talk a lot about doubles being like a language you learn to speak and can then play with anyone if you understand assignments, shot selection and situations,” Tsounabos said. “Sometimes partnerships change, so we want our players to feel like they can be successful with more than one teammate because they have a great knowledge of and understanding of the game of doubles.”

This flexibility in play style was exemplified best by Dasha Kourkina, who also strung together great performances this weekend. After winning a singles match and three doubles matches on Friday evening with Rompf, Kourkina won a doubles match on Saturday alongside junior Marcella Cruz. Although she did drop her final singles match on Sunday afternoon, it was a very convincing weekend for Kourkina, all things considered.

Although the Commodores did struggle in singles on day three of the invitationa, they also had their best performance of the weekend from none other than Rompf.

After winning the first set 6-2, Rompf came down with an injury that hindered her ability to execute an overhead serve, per her coach. After dropping the next set, she denied the opportunity to play a 10-point tiebreak in place of a full third set, which she went on to win 7-6 (2) to take the match. The gutsy performance from Rompf was a good way to finish off a weekend that served as valuable preparation for the spring season.

“Overall, I thought we had a good fall and performed solidly. Our doubles are improving a lot and will continue to get better. I learned that we are young but eager as a group to improve. They respect and value one another and that’s the foundation of building a great team. When we get completely healthy I am excited about the potential this team has,” Tsounabos said of her team’s fall season.

Although the team’s fall season is over, the Commodores will continue to train through the winter in preparation for the SEC and NCAA tournaments which begin in the spring. The first of these is the SEC Tournament in Gainesville, Florida, starting on April 20.