Surfaces: Yeah, it was a “Good Day” 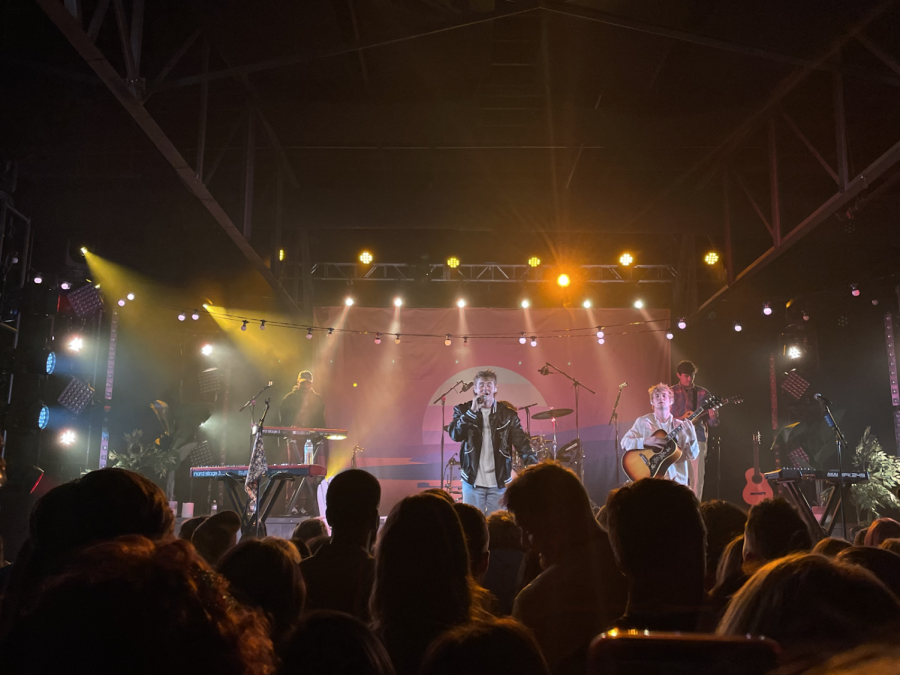 I’ve always loved the way the crowd becomes a family at concerts. Whether it’s the chorus of voices screaming lyrics or making sure that the people behind you can still see, the concert experience is more than just listening to the same songs you hear on the radio.

It’s about coming together as a community. However, since the beginning of the pandemic, I haven’t been able to see live music, and boy, have I missed my family. That all changed when Surfaces came through Nashville on their Good 2 Be Back Tour on Oct. 28.

Surfaces is the type of band you can listen to when doing homework, vibing with friends or if you want to feel some “main character energy.” You would probably recognize their hit song, “Sunday Best,” which blew up on TikTok at the start of quarantine and had everyone dancing their loneliness away.

As somebody who is 5’1”, I arrived at Marathon Music Works more than an hour early so that I could have a good view of the stage (or at least a spot where I could see something). After befriending the fellow short girls in front of me and creating a pact to not let any tall people in front of us, we were ready for the opening acts.

First up was Public Library Commute. I hadn’t heard much about Conrad before going to the show, but it was evident those around me did. His songs made the entire audience move as a unit: swaying back and forth to the modern, jazzy tunes. Songs like “1000 Summers” and “Summertime” made me feel nostalgic for bright summer days, especially as crisp fall weather is setting in. He also played an unreleased song titled “Across the Room” which comes out soon (spoiler alert: it’s good). Not to discredit Conrad’s unique songs, but the best part of the set was when he performed a cover of “Loving is Easy” by Rex Orange County which had the entire audience grooving.

Next up: Verzache. Truthfully, when he came on stage, I thought he was part of the stage crew who was meant to be fixing the microphones. However, once he started singing, the entire crowd erupted into cheers. I was personally impressed with the amount of engagement he had with the audience. Tell the crowd to start jumping? Check. Ask the crowd to turn on their phone lights? Check. Spray the crowd with water? Check (wasn’t a huge fan of this one). This fan interaction wasn’t just an onstage facade. My friend and I DMed Verzache on Instagram after he left and told him that his performance was “radical” (said ironically) and he replied by thanking us for the support. He ended his set with his famous Tik-Tok song, “Needs,” which resulted in exclamations of “Oh! He’s that guy!” Even though most of the audience weren’t fans of his before the show, it was obvious that they were after.

After two hours of phenomenal music, a quick set change was in order which featured the addition of plants, lawn chairs and summer patio vibes. Thrilled murmurs filled the air until, suddenly, the lights dimmed and Surfaces emerged onstage in a very nonchalant manner, like the cool uncles arriving late to a summer cookout. Public Library Commute made his return to the stage since he also plays in their band.

They opened with their vibrant song “Good Day” followed by hit songs such as “So Far Away,” “Heaven Falls” and “Grace.” Their music is vibrant and rhythmic; I couldn’t help but let loose and head bop along with the rest of the crowd. Their stage presence was incredible and captivating, and although it was a bit difficult to see over the hands of dancing college students, I always managed to locate the zealous performers.

Favorite moments of the night included a guitar solo from Public Library Commute during the song “Let Me Know” and the build-up to the song “Sheesh!” which resulted in an eruption of laughter at the childlike, nostalgic nature of the music. Another notable moment was their rendition of “Ain’t No Mountain High Enough” by Marvin Gaye, which was a delightful surprise. After “ending their set” with their song “Wave of You,” they returned for an encore  to perform the indisputable crowd favorite: “Sunday Best.” I haven’t had the pleasure of being in a mosh pit, but I’d say this experience was pretty close to what I think that feels like. Everyone started to jump and scream the lyrics, becoming one happy mass.

Surfaces’ raw and energizing vocals mixed with such an animated audience created the perfect concert experience. Although it was their first time in Nashville, we’re ready for whenever they perform here next. Until then, in the words of Surfaces themselves, “Take It Easy.”