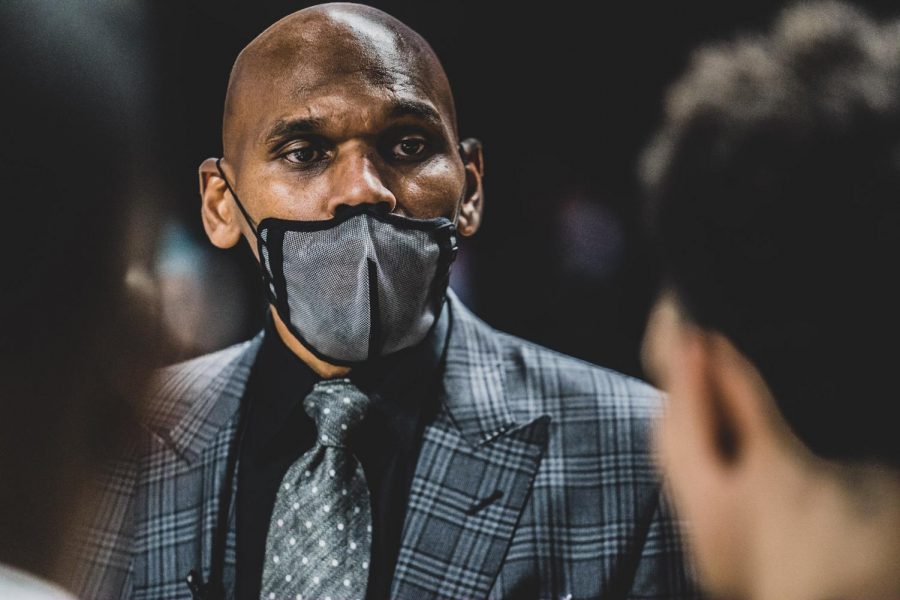 Basketball is nearly back at Memorial Gymnasium, with the season opener for the Commodores coming on Nov. 10 against Alabama State. After today’s practice, head coach Jerry Stackhouse talked about the team’s growth, current injuries and defensive strategy.

The major announcement of the day was the knee injury and subsequent surgery for transfer guard Rodney Chatman, who did not participate in the session of practice open to media. Chatman was seen on the sidelines in street clothes without any crutches or brace.

“Rodney sprained his knee, so he had to have surgery to clean up a little bit of a meniscus tear,” Stackhouse said. “We’re looking to have him back in four to six weeks.”

Within the next four to six weeks, the team will likely miss Chatman in significant nonconference matchups against VCU on Nov. 17, Pittsburgh on Nov. 24 and Loyola Chicago on Dec. 10.

“That’s how fickle this thing is,” Stackhouse said. “We were feeling great about where we were as a veteran team, and we still feel good, but now this forces Tyrin Lawrence to work his way back a little sooner than otherwise.”

Despite the challenges of losing Chatman so early in the season, Stackhouse shared an optimistic view of how the absence will provide opportunities for younger players, including Lawrence who is now practicing fully with the team.

“I think, ultimately, it’s going to be good for us. Shane Dezonie and Peyton Daniels are probably going to get a few more reps than they would have,” Stackhouse said. “Our younger guys, we don’t want to have to put the pressure on them that we did [with freshmen] in the past, kind of throwing them into the fire, but where they are and what they are doing right now we just want them to play the game.”

Vanderbilt will also be missing transfer center Liam Robbins due to his continued recovery from a foot injury. Robbins was recently named to the preseason watch list for the Kareem Abdul-Jabbar Award, given to the best center in college basketball. Stackhouse indicated that the senior has not had any back-to-back workouts just yet, but that he is certainly on the mend, participating in on-court activities now. Stackhouse confirmed that he does expect Robbins to miss the season opener and doesn’t have a definitive timeline for his return.

Robbins is sure to have a huge impact on the defensive end of the floor, but even without him, on that end Stackhouse likes where his team stands with schemes and growth. He noted that many of the team’s upperclassmen have improved as concepts have become second nature.

“They’re better [on defense], we’re better [on defense] just from seeing things and how we want to guard. We have tweaked some things to our defense to make opposing offenses see more bodies than maybe they have in the past,” Stackhouse said. “Schematically, we have grown and look a lot better in what we are doing.”

The Commodores will get their season rolling on Nov. 10 at home when they host Alabama State.