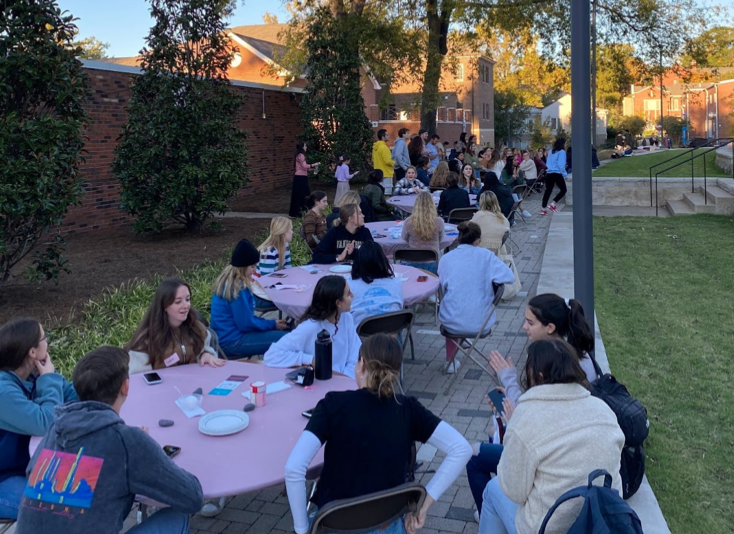 Vanderbilt Athletics continued its “Commodores for a Cause” initiative, which aims to educate the Vanderbilt community about breast cancer.

“This year, Vanderbilt Athletics chose to support breast cancer awareness through various staff activities involved in the initiative Commodores for a Cause,” Deputy Athletic Director for Internal Affairs Dr. Kristene Kelly said. “It’s a way for us to use our platform and join together in the fight against a disease that impacts so many.”

“This month’s staff initiative features events for participation culminating in special prizes,” Kelly said. “Some of those activities include Zumba, Yoga, Staff Field Day and a Walk-a-Thon.”

Kelly shared additional initiatives in which Vanderbilt Athletics participated throughout October, including “Dores Wear Pink.” For this program, the entire athletics department wore pink every Wednesday throughout October. A donation drive in partnership with the Young Women’s Christian Association (YWCA) was also held during the Oct. 30 football game, which was designated the breast cancer awareness game.

“We connected with the director of ‘LIFE INTERRUPTED,’ Paula Mozen, in order to share her documentary that centers the stories of three women (herself included) and their individual journeys of diagnosis, treatment, recovery and rebuilding,” senior and member of Alpha Kappa Alpha Sorority Sarah McCrackin said. “The film is a testament to the importance of advocacy, adequate access to medical care, community care and education regarding health disparities among lines of race, gender and class.”

The Eta Beta Chapter of Alpha Kappa Alpha Sorority has also held ongoing initiatives that align with its focus on breast cancer awareness and prevention.

“Our sorority has a long history concerning the wellbeing of women, including improving access to mammograms with the AKA Mobile Breast Cancer Screening Unit,” McCrackin said.

“Sharsheret helps the lives of Jewish women or families impacted by breast cancer or the BRCA gene mutation (which increases an individual’s risk for breast or ovarian cancer and is more common amongst Ashkenazi Jews),” Levinson said.

“We spent the month spreading awareness for breast cancer, learning statistics to educate ourselves and others and sharing our own personal experiences with women fighting against breast cancer,” senior and Vanderbilt’s Zeta Tau Alpha President Sophie Acosta said. “We have had multiple fundraising efforts and are so thrilled to have raised over $10,000 throughout the month of October.”

Per Acosta, Vanderbilt’s chapter of Zeta Tau Alpha will continue launching breast cancer awareness initiatives into November. Touchdown For a Cure, a touch football tournament, will occur on Nov. 6 and will raise money for Sisters By Choice, a mobile breast clinic, as well as Memorial Sloan Kettering Cancer Center.