Although Vanderbilt ran for a staggering 258 rushing yards, the Commodores fell short to SEC opponent Missouri after allowing 504 yards, 22 first downs and a last-second first-half touchdown. 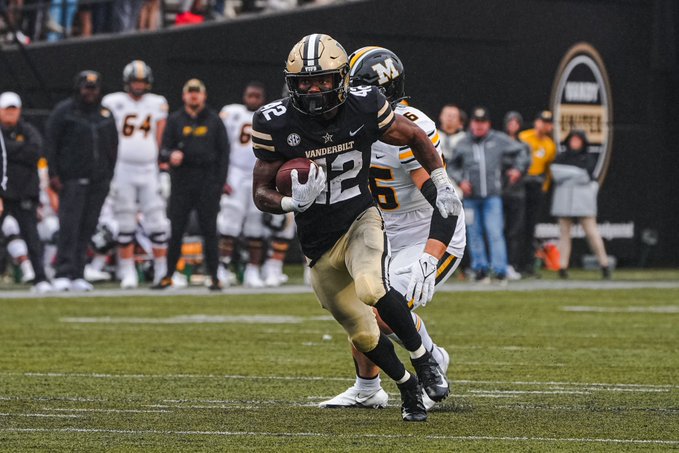 Vanderbilt was prepared to enter the halftime locker room with a lead and much to be proud of. With almost 20 seconds remaining in the first half, the Commodores attempted a fake field goal trick play, but failed to convert. Just three plays later—with zeroes on the clock—Missouri’s quarterback Connor Bazelak converted on a 45-yard Hail Mary to Keke Chism. The Commodores’ defense had played with discipline all half, but the prayer-touchdown changed the narrative and paved the way for the Commodores to ultimately lose to Missouri 37-28.

“We had the receiver in the end zone and we needed someone to play the ball,” head coach Clark Lea said. “It was a disappointing swing that we had the chance in the second half to erase.”

After winning the coin toss and electing to differ, the Commodores’ defense would be tested right from the get-go. Missouri marched into Vanderbilt territory looking to score a touchdown quickly, but defensive tackle Daevion Davis knocked down Bazelak’s third-down pass. This deflection led to a successful 46-yard field goal attempt for the Tigers.

After a subsequent three-and-out for the Vanderbilt offense, Missouri added to its lead, capping a nine-play drive with a 13-yard rushing touchdown from senior running back Tyler Badie. Just a few moments later, Vanderbilt’s Harrison Smith had a punt blocked.

“The block was a breakdown in execution,” Lea said. “We have done a decent job at getting punts off, but we need to make our blocks. That could have been a backbreaker early.”

Bazelak and the Tigers had the ball on the Vanderbilt 15-yard line with a 10-point lead with nearly five minutes remaining in the first quarter. The Commodores needed a turnover to turn the tide of this soon-to-be rout and senior safety Maxwell Worship provided that much-needed spark by intercepting Bazelak.

On Vanderbilt’s next drive, Wright rejuvenated Vanderbilt Stadium with an exhilarating 69-yard quarterback keeper. Cam Johnson then scored a seven-yard touchdown on a shovel pass the next play.

Mizzou ranks second to last in country in rushing yards allowed per game. Now we are seeing why.

Missouri gave the ball right back to the Commodores after the blocked punt via an interception and a 69-yard rush from Mike Wright set up a Cam Johnson TD.

Vanderbilt continued to expose Missouri’s rush defense as the game progressed. Going into this matchup, the Tigers had allowed 286.6 rushing yards per game, the second-worst for all FBS teams. After giving up 80 yards on the ground on Vanderbilt’s first touchdown drive, the Tigers surrendered 70 yards on the Commodores’ next offensive drive. On that drive, freshman running back Patrick Smith notched 52 rushing yards, including a 10-yard rushing score to give Vanderbilt a four-point advantage. Vanderbilt headed into halftime with 158 rushing yards and down 17-14 after the Hail Mary touchdown.

“We wanted to establish the run game,” Wright said. “Hats off to Patrick Smith and James Ziglor. That’s two true freshmen taking on a role. I’m proud of those two guys right there.”

From now on, this is a Patrick Smith fan account. 9 for 70 and a TD for the true freshman!

13 plays for 84 yards and a Vanderbilt touchdown.

On Missouri’s second drive of the third quarter, the Tigers faced a 4th-and-1 on the Vanderbilt 34-yard line. Bazelak converted a 19-yard pass to Tauskie Dove, which was followed by a 15-yard Badie rushing touchdown. Vanderbilt would punch right back, thought, with a 70-yard quarterback run, which was followed by a Gavin Schoenewald touchdown three players later on a shovel pass.

Shovel pass to Gavin Schoenwald for the touchdown! His first in the Black and Gold. Dores back in it.

With three quarters past, the Commodores were behind three points and had an opportunity to upset the college football world. On the first play of the quarter, kicker Harrison Mevis knocked in a 32-yard field goal, boosting the Tigers’ lead to six. A few drives later, Mevis’ 52-yard field goal try was successful. The Commodores then trailed by nine points with just under six minutes remaining in the game before Wright delivered a touchdown pass to Johnson to give Vanderbilt a bit of promise.

All of Vanderbilt’s hope quickly vanished, however, as the defense allowed a 73-yard rush to Badie and a two-yard rushing score for backup quarterback Tyler Macon just minutes later.

The Commodores will now head into their bye week. After a much-needed break Vanderbilt will look to get back in the win column against the No. 12 Kentucky Wildcats on Nov. 13.