The SEC is as strong as ever this season, so what should fans expect out of new head coach Shea Ralph and the Commodores? 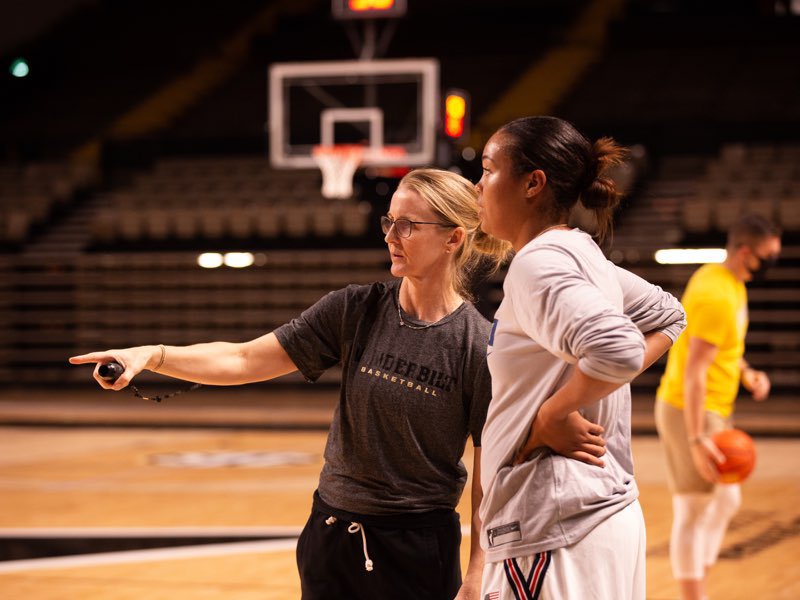 Vanderbilt women’s basketball is entering the 2021-22 season coming off of a tumultuous 2020-21 campaign and subsequent offseason.

On Jan. 18, 2021, athletic director Candice Lee announced that the team would not be continuing their season. Following a narrow loss to then-No. 12 Kentucky the night before, then-head coach Stephanie White stated that due to COVID-19, injuries and opt-outs, the Commodores could not safely continue their season. Having played only eight games, the Commodores finished their season with a 4-4 record.

Three months later, Koi Love, the Commodores’ leading scorer and best overall player, announced her transfer to Arizona. To make the offseason even more turbulent, the day after Love’s transfer, Lee announced the firing of White. White finished her tenure with an overall record of 46-83, and 13-54 in conference play.

Despite an unsettling first half of 2021, in the second half of the year the women will look to turn it around, and that turnaround begins with one person: Shea Ralph.

After White’s dismissal, Lee named former UConn assistant coach Shea Ralph as Vanderbilt’s next head coach. Ralph comes to Vanderbilt with not only experience with arguably the best college basketball coach of all time, but also a winning pedigree—a pedigree that will hopefully help the Commodore’s avoid a familiar pattern: nonconference success against below-average teams, followed by disastrous in-conference play.

In the 2020-21 schedule, the Commodores’ lone wins came against non-Power Five teams. Their losses included a head-scratcher to Arkansas-Little Rock, a competitive battle with Kentucky and lopsided losses to South Carolina, by 63 points, and Alabama, by 24 points. With more nonconference games this year following the loosening of COVID-19 protocols and the key addition of Ralph, the Commodores’ record is likely to look a lot different from last season.

This year, the Commodores do not face a Power Five team until after Thanksgiving, allowing them time to mesh as a group, become accustomed to Ralph’s new schemes and for the underclassmen to gain experience against lesser opponents.

Although the Commodores are likely to improve from last season, this is still likely to be a rebuilding year for Ralph and company, as the team lost their three leading scorers in Love, Chelsie Hall and Enna Pedhadzic to the transfer portal and graduation.

Overall, the Commodores will likely be anchored by the play of Brinae Alexander and Jordyn Cambridge, and hope for key role players Brylee Bartam, Yaubryon Chambers and Demi Washington to make significant contributions. However, Ralph did manage to bring in a high-quality freshman class composed of four top-100 ranked student-athletes. The group is headlined by Sacha Washington and De’Mauri Flournoy, the No. 57 and No. 69-ranked recruits, respectively. Although it’s likely that they will not make up for the losses of Love, Hall and Pehadzic due to the rigor of college basketball, this season gives these talented freshmen valuable experience to later use to produce at the levels that they are capable of down the road.

Over Thanksgiving Break, the team will travel to the U.S. Virgin Islands to take part in the Paradise Jam tournament, in which they will face Arizona, Rutgers and Depaul.

The most important of the three games will likely be against Arizona. Not only is it the school to which former Commodore Koi Love transferred, but Arizona is also the seventh-ranked team in the country and the highest-ranked team Vanderbilt will face before SEC play. This is going to be a very tough game for the Commodores, in which they will likely have to rely heavily on their upperclassmen leaders, Brinae Alexander and Jordyn Cambridge.

Next, they will play No. 12 Rutgers and Depaul. These three games will present a challenge firstly because of the short time span of the tournament—three games in three days—but also because these three schools are the only highly-touted schools that the Commodores will face before SEC play.

Facing these squads will give Ralph the opportunity to see how her team responds to adversity, and judging by all that the Commodores have fought through and overcome the past year, the outcome may be better than expected.
Conference play
Conference play is where things get significantly more difficult for the Commodores. The SEC is consistently the No. 1 conference from top to bottom in women’s basketball, and that is unlikely to change this year.

Of the top-30 ranked teams, five are in the SEC, all of whom the Commodores play within a relatively short time period. The conference play period of the schedule will be a very strong test for the team, as it will be a significant step up from the majority of the competition they will face in nonconference play.

Particularly, the Commodores face a very tough January. In the three-week span from Jan. 6-27, the Commodores’ will face four top-30 teams in Arkansas, South Carolina, Kentucky and in-state rival Tennessee.

Of these four games, South Carolina and Tennessee will likely be the toughest and most important. If Ralph wants Vanderbilt to be an elite program, these are the type of teams that the Commodores must be competitive against, as both programs have the winning pedigree that she looks to establish at Vanderbilt.

Up first in January will be Tennessee.The Commodores’ annual games against Tennessee typically prove to be competitive due to the nature of the rivalry, and fans should feel assured that this year will be no different. The Commodores last beat the Vols in 2019.

South Carolina is coming off of yet another Final Four run, and four years removed from a national championship. The Commodores took a brutal loss from South Carolina last season, and will be looking to redeem themselves. Although the outcome might not be positive, both of these games will be great character tests for the team.

This stretch might not be pretty in terms of wins, but will demonstrate Ralph’s ability to motivate her team and maintain a positive attitude with her group regardless of wins and losses.

Through all that has happened with Vanderbilt women’s basketball in the past six months, one thing that is very clear is that the team is moving forward, not backwards. Although they may not be the best team in the SEC this year, this season should provide Commodore fans with great hope for the future of the program.

The Commodores will get their season underway on Nov. 9 against Gardner-Webb in Nashville.