Vanderbilt’s head coach spoke with the media on Wednesday to provide updates on injuries and the team’s progress with tip-off just two weeks away. 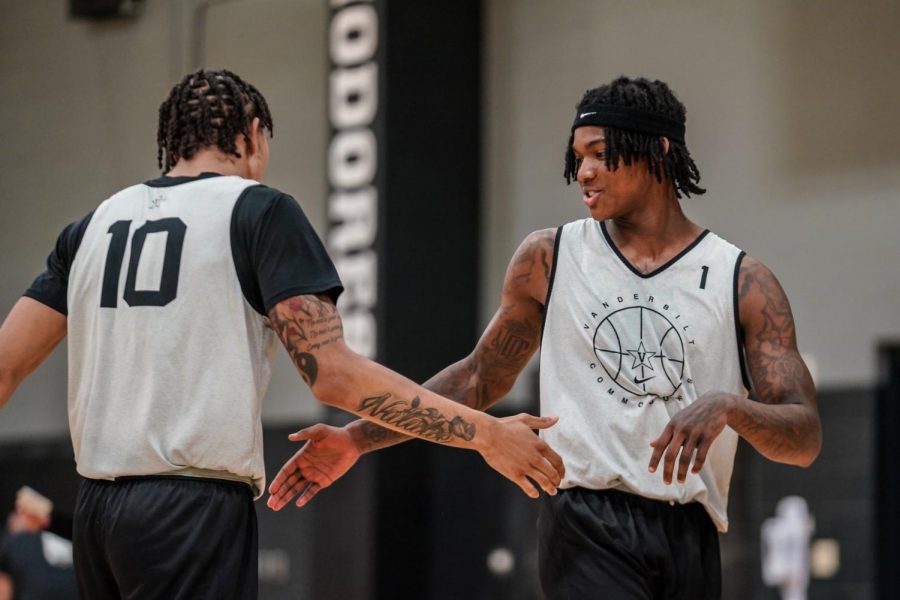 In exactly two weeks, Vanderbilt men’s basketball will open its season at home against Alabama State. As head coach Jerry Stackhouse enters his third season on West End with a reloaded roster, he is optimistic about the progress his squad has made through the preseason.

Once again for Vanderbilt, injuries have emerged as a central storyline—most notably, the health of center Liam Robbins. The former standout at Minnesota came to West End via the transfer portal this offseason, but has been battling back from a foot injury. He did not contribute to the scrimmage portion of practice that was open to the media on Wednesday, but Stackhouse indicated Robbins is on his way to recovery.

“Liam’s doing well. His ramp-up has him back on the court doing dummy offense in the first week of November, so he’s on schedule,” Stackhouse said. “Still probably the first week is just kind of getting acclimated, probably some dummy offense, non-contact. Second week we ramp up a little bit and maybe we’ll see where we’re at in the third week.”

Another Commodore on the opposite side of injury is guard Tyrin Lawrence. Lawrence, now a sophomore, appeared in just seven games last season before tearing his ACL. But the athletic guard has returned to the court in full capacity, competing in Vanderbilt’s live situations and scrimmages. The head coach also pointed out that Lawrence, a lefty who did not hit a three-pointer all of last season despite six attempts, has been working to refine his jump shot and the use of his right hand.

“It’s good to see him back out there. We know he’s going to struggle a little bit just confidence-wise getting back out there, getting bumped,” Stackhouse said of his 6’4” guard. “He looks good. In the scrimmage we had yesterday, he had seven points in a 10-minute scrimmage. Had a three, had a couple of nice drives. He’s our best downhill guy—even more so than Scotty.”

In addition to preseason practices, Stackhouse also alluded to a pair of preseason secret scrimmages that his team will compete in. As is customary throughout college basketball, teams will set up private scrimmages with other Power Five teams in preparation for live game action.

The head coach noted that he was pleased by his team’s performance in their first scrimmage this past weekend, highlighting that freshman Shane Dezonie helped get the team going offensively with a pair of three-pointers and that winning is still important despite it being a scrimmage.

“Winning is always a key part of it, but again, we’re going to play everybody—have to see what guys do. In our previous scrimmage everybody played aside from a couple of the walk-ons,” Stackhouse said. “It was a good test this past weekend. Hopefully another good test for us [this weekend]. Another physical team that kind of matches the type of physicality that we will see in conference play.”

Although everyone is getting chances during his team’s closed scrimmages, Stackhouse indicated that he has begun narrowing down his starting lineup. The Commodores’ head coach labeled Scotty Pippen Jr. and Rodney Chatman as a pair who would likely start, but explained that the power forward position is one that is still up for grabs.

Returning is sophomore Myles Stute who, while only 6’7”, played plenty of minutes at the power forward position last season. Also into the mix are transfers Terren Frank, who boasts a bit more size at 6’8”, and Jamaine Mann. But both are new to Stackhouse’s systems and style.

“Right now, Myles is in front of [Frank and Mann] just from knowing what to do and having a better understanding and he had a great summer,” Stackhouse explained. “But those guys are going to definitely get minutes at that four spot. It’s going to be fun to watch that battle all year long. I think we pretty much solidified some of those other positions as far as guys who’ve been around when you look at Rodney and Scotty in the starting lineup.”

In addition to Chatman, Frank and Mann, Stackhouse has five other newcomers. At first glance, integration and establishing culture might come across as a challenge. But the head coach credited his veterans for setting the tone from the start.

“Our leaders have been really good. Our guys have come in and kind of set the table of how we do things, how we approach our work,” Stackhouse said. “We don’t have to come in and try to onboard them when we have guys that understand that they come in and do their work and you just follow the leader. And that’s kind of our approach.”

The Commodores will continue preseason practices until their season officially kicks off on Nov. 10 in Nashville.