Vanderbilt should be more competitive this season than they’ve been in a number of years. So who will the wins come against? 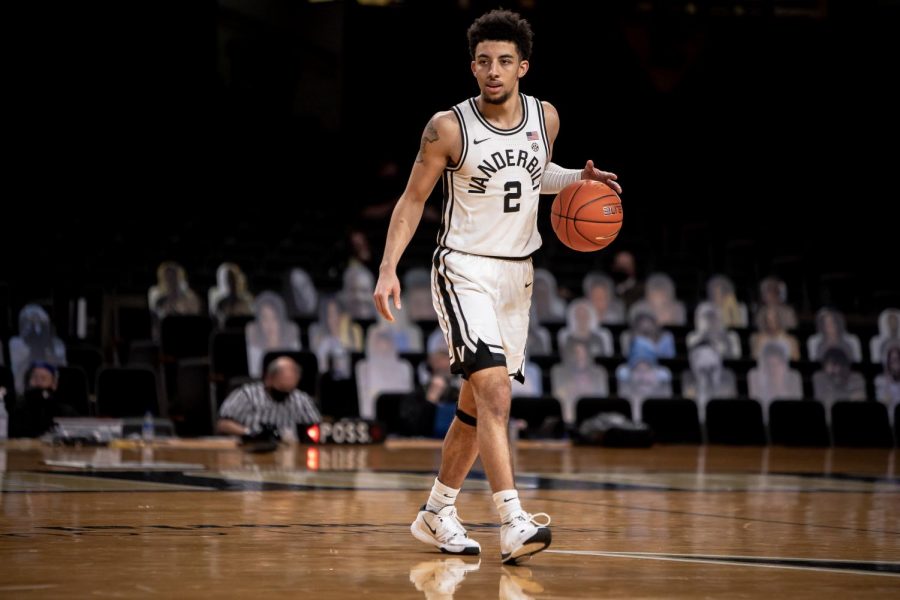 Scotty Pippen Jr. brings the ball up the court in Vanderbilt's 93-81 victory over South Carolina on Jan. 30, 2021. (Hustler Multimedia/Hunter Long)

The leaves are changing colors and the wind is starting to blow a bit cooler around West End. The Commodore football team is struggling through the middle of its SEC slate, while soccer nears the end of their campaign. What does all this mean?

Back is last season’s leading scorer Scotty Pippen Jr., who was newly minted as the SEC’s Preseason Player of the Year on Tuesday. Head coach Jerry Stackhouse also returns junior starter Jordan Wright, bench contributors Trey Thomas and Myles Stute, and more in his third season at the helm. The Commodores are expected to be more competitive than they’ve been at any point during Stackhouse’s tenure with preseason expectations ranging from not-last-in-the-conference—which is an improvement—to a flirtation with postseason play, whether that be the National Invitational Tournament (NIT) or the NCAA Tournament. KenPom predicts the Commodores to finish at 15-14 with a 7-11 conference record.

Last season was a 9-16 effort that saw the Commodores pick up four conference wins, including a 20-point blowout win over Mississippi State in Starkville and a victory over Texas A&M in the SEC tournament. Stackhouse lost a number of key contributors to the transfer market including Dylan Disu (Texas), Clevon Brown (Florida International), and Max Evans (TCU) but was able to add an infusion of talent via the portal as well. Rodney Chatman (Dayton), Liam Robbins (Minnesota) and Terren Frank (TCU) all figure to play prominent roles in the rotation, with Chatman and Robbins likely to be tabbed as starters come the meat of the schedule.

After a shortened 2020 campaign in which Vanderbilt played just 25 games—and had seven cancelled due to COVID-19—the Commodores have a full slate of 35 games on the docket for 2021. The highlight of the 2021-22 edition of the Vanderbilt schedule is a Christmas trip to Hawaii to play in the Hawaiian Airlines Diamond Classic from Dec. 23-25. Here’s a look at some of the other notable contests on the calendar for the Commodores a little under a month before their opening matchup against Alabama State.
The Nonconference
Vanderbilt’s nonconference schedule may not be described as particularly strenuous, however there are a number of teams on the schedule that are certainly … frisky. The Commodores will hit the road just twice in the first two months of the season but will make their way out to Hawaii for the Diamond Head Classic. Here’s the most interesting matchups in this portion of the schedule.

Pittsburgh will not be one of the better teams on Vanderbilt’s schedule this season. That said, this is a key game because it is a Power Five opponent on the road. This provides Vanderbilt a chance to prove early on in the season that they’ve lifted themselves out of the cellar of the Power 5. The Panthers are coached by Mike Krzyzewski disciple Jeff Capel, who has managed a 40-48 record over his first three seasons on the job. Pittsburgh limped to a 10-12 mark in 2020 and subsequently lost six players from the roster, including their three leading scorers.

KenPom projects this as a 76-73 win for Stackhouse and the Commodores, which would be an early-season statement: Vanderbilt hasn’t beaten a Power Five nonconference opponent on the road since Nov. 11, 2018. Darius Garland led the Commodores with 19 points and Simisola Shittu chipped in 14 points and 15 rebounds in an 82-78 win at USC on that day. So yeah, it’s been a long time. Getting a significant win on the board before the calendar turns to December would be a big momentum-builder for Stackhouse’s crew, and I like the team to do so over what will be an undermanned Pittsburgh squad.

This contest is intriguing for multiple reasons. First off, it was a wild contest in 2019 when Vanderbilt blew an eight-point lead in just over two minutes before losing in overtime. Aaron Nesmith continued his breakout campaign, dropping 29 points on 8-of-13 shooting from 3-point range. Then, last season’s return game was cancelled due to COVID-19. Now, two years later, this remains a tight matchup between two equally talented teams. The Mustangs are fresh off an NIT appearance following an 11-5 regular season, led by head coach Tim Jankovich. Jankovich’s Mustangs should be even better this season after he hauled in the 33rd-ranked recruiting class in the country in 2021 (247Sports) and a number of transfers including 2020 Southland Conference Player of the Year Zach Nutall. KenPom has SMU on the bubble in the preseason, ranked at No. 60, just 19 spots higher than Vanderbilt. This will be another good road test for the Commodores against an opponent that is reminiscent of a mid-level SEC foe. If Vanderbilt is able to escape Dallas with a win, the ears of Commodore nation should really begin to perk up.

The Ramblers are fresh off another Cinderella March Madness run after making it to the Sweet 16 in 2021, defeating No. 3 overall seed Illinois along the way. KenPom rates the Ramblers at No. 32 in the country heading into the season, best in the Missouri Valley Conference (MVC). However, famed coach Porter Moser left this offseason to take over the Oklahoma job from Lon Kreuger. In his place is the 30-year-old Drew Valentine—brother of former Michigan State Spartan Denzel—who will be the youngest head coach in Division I this season. The Ramblers return starters Lucas Williamson, Keith Clemons and Braden Norris from their Sweet 16 team and feature a whopping 11 upperclassmen on the roster. This game is the second in three years between these squads—Loyola defeated Vanderbilt 78-70 at the Footprint Center in Phoenix, Arizona, in 2019.

This one will likely be the most difficult matchup of the nonconference slate for the Commodores, but not necessarily one where they will be at a talent disadvantage. The Ramblers were notorious for controlling pace of play and staying within themselves under Moser, so it will be interesting to see how Valentine mans the ship in his absence. The contest will take place towards the end of the nonconference schedule, which is significant for two reasons. First, it means Stackhouse and Vanderbilt will have some time to establish their identity with a number of tests beforehand on the schedule. Second, this game will give Commodore fans a good outlook on how the SEC slate might play out. Currently, KenPom predicts this as a 75-74 Loyola Chicago win, but give me the Commodores at home in this tilt before they head out the Diamond Head Classic.
Conference Play
Picking just a couple of league games to highlight is a difficult task—every game on Vanderbilt’s SEC slate will be important and the Commodores should be as competitive within the conference as they’ve been in a number of years. Bryce Drew infamously failed to pick up a single conference win in 2018-19. Stackhouse has amassed a 7-30 record in the SEC in his first two seasons. Needless to say, Vanderbilt will need to knock off some more conference foes in 2021-22 if they want to make a push towards the postseason. Here’s the most intriguing matchups from their 18-game conference schedule.

This is a contest that will come early in the SEC schedule for Vanderbilt—and it is one they should be expected to win. The Commodores cruised to a 93-81 win over the Gamecocks last January in Nashville behind 29 points from Max Evans. It was the second series win in a row for Stackhouse after Vanderbilt beat South Carolina towards the conclusion of the 2020 season, 83-74. As for the current campaign, KenPom has Frank Martin’s Gamecocks at No. 86 on his preseason rankings, just below Vanderbilt. For Stackhouse and the Commodores, coming out with an early-season SEC win would be a statement that Vanderbilt has distinguished itself from the basement of the conference—leaving South Carolina in their place. Building momentum by getting a win in the second game of league play would be a big confidence booster for Stackhouse’s squad before they get into the teeth of the SEC schedule.

Playing against Kentucky is always reason for excitement. Playing at Rupp Arena in Lexington takes it one step further. Needless to say, this one should be juicy. John Calipari reloaded the Wildcats this offseason with a plethora of transfers, including former Georgia point guard Savhir Wheeler. He also rehauled his assistant staff, bringing back former running man Orlando Antigua from Illinois. So this rendition of the Wildcats should be more competitive and put together than the past couple of years. One would think. However, even with exorbitant talent, Calipari has struggled at the helm lately, capped by a 9-16 season in 2020-21. And Vanderbilt has been a particularly stingy opponent for Kentucky over the past two seasons. Last year’s two matchups were decided by a total of six points and there’s been just one contest of the last 11 that wasn’t within 15 points at the finale. Is this the year the Commodores can finally get over the hump? This game will come smack in the middle of the SEC schedule and despite all the talent the Wildcats have, Vanderbilt might have the best player on the floor in Pippen Jr. Count me as intrigued by this one, especially if the Commodores get off to a good start in conference play.

The Florida Gators ended Vanderbilt’s season last year in the SEC Tournament. It was a hard-fought game between the two sides that ended with Florida escaping with a six-point victory before they were bounced in the second round of the NCAA Tournament by Cinderella Oral Roberts. KenPom has Mike White’s squad ranked in the top 25, so the Gators will once again be a formidable opponent. However, defending home court against a quality opponent in March should be a reasonable ask for Stackhouse in Year 3. Vanderbilt has generally played its best basketball towards the end of the season under Stackhouse, so by the time this game rolls around, Vanderbilt should have every reason to compete. If all goes well, this matchup may feature some postseason implications, which would be a welcome return to Memorial Gymnasium in the month of March.