Black and Gold Series Wrap-up: Series ends in a tie

In the annual fall Black and Gold Series, the Black team took Game 1 by a decisive margin, but Gold rebounded, winning Game 2. 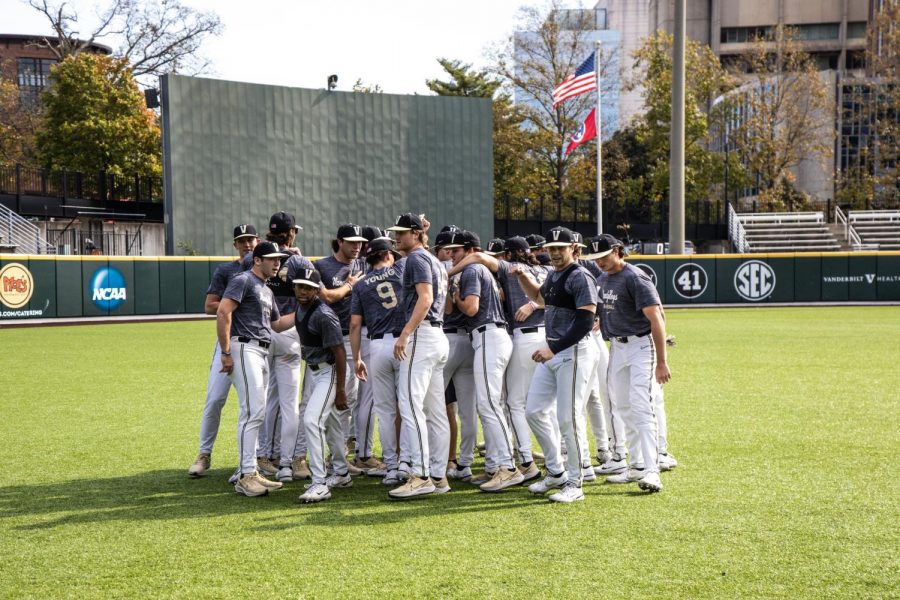 Vanderbilt baseball huddling in the outfield during its fall scrimmage in Oct. 2021. (Vanderbilt Athletics)

For the first time since June 12, the VandyBoys graced Hawkins Field this past week in live game action for their annual Black and Gold Series—usually a three-game set of intrasquad scrimmages.

It was the Black team that jumped out to the early lead in the series with a decisive victory on Friday. But after Gold rebounded on Sunday, a decisive Game 3 should have been in the works for Tuesday. Unfortunately, Tuesday’s game was cancelled, thus ending the series in a 1-1 tie.

In lieu of game recaps, The Hustler provides its takeaways from each seven-inning game of the series.
Friday: Black wins 7-0
After 2 hours and 47 minutes of baseball in below-60 degree weather, the Black team defeated the Gold team by a convincing 7-0 margin.

It was clear early on that sophomore pitcher Patrick Reilly was feeling confident for the Gold team. He struck out the side in the top of the first with only 12 pitches to his name, and no one came close to fouling off a pitch. He ended up going 3.2 innings while allowing one hit, walking five and striking out seven.

He constantly attacked hitters and forced them into swings-and-misses or weak contact. He did put himself into unnecessary jams with a handful of walks, but when he found the zone, he was quite effective.

On the other side, freshman pitcher Carter Holton carried that same confidence for the Black team, getting out of his first inning 1-2-3 in only nine pitches with two strikeouts. He finished with 4.2 innings pitched while allowing one hit, three walks and striking out six.

This mix of his zipping fastball and looping curve frequently fooled hitters and forced swinging and looking strikes galore. When batters did make contact, his defense stepped up to keep the Gold team off the base paths, heightened by a leaping Carter Young snag and a Javier Vaz ranging fronthand putout on subsequent plays in the bottom of the third. Holton also showed a great deal of poise on the mound, a positive sign for any freshman pitcher, never letting innings get out of hand. His accelerated, wonky leg kick from the stretch is a slight red flag, but the young hurler flashed plenty of potential.

The Black team’s bats began roaring in the fourth, and they didn’t want to stop. After his seventh strikeout, Reilly was taken out with 74 pitches and replaced by freshman Greysen Carter. After Christian Smith walked and advanced to second on a wild pitch for the Black team, shortstop Kenneth Mallory poked a grounder to left, sending Smith home with ease. Mallory then showed off his wheels by stealing second and third on the same passed ball and subsequently scoring on a wild pitch.

Then in the fifth, right fielder Spencer Jones legged out a no-doubt triple off of a misplaced dive by Gold team left fielder TJ McKenzie. A single up the middle by designated hitter Alan Espinal sent Jones home, extending the lead to 3-0.

The Gold team began to implode from there. With a man on first in the top of the sixth, Vaz laid down a bunt that was fielded and overthrown by Gold team pitcher Jack Anderson, advancing runners to second and third. Anderson then walked two in a row to send a run in. Black team center fielder Calvin Hewett then cleared the bases with a rocket into the left center gap, legging it out for a triple and giving the Black team a 7-0 advantage, where they’d stand for the rest of the game.

The biggest takeaway from Game 1 was that the VandyBoys continue to pounce on any and every mistake by opposing teams. Despite only six hits (none of which came from the long ball), the Black team put up seven runs by finding holes in clutch moments with runners on base. They also didn’t make many mistakes in the field, scooping up routine plays and making the tough ones look easy.

For the Gold team, fewer walks and one big hit could have propelled them back in the game. Tate Kolwyck was impressive, racking up two hits in three at-bats and adding a stolen base.

– Connor Campbell, Staff Writer
Sunday: Gold wins 6-3
In Game 2 of the intrasquad series, it was Troy LaNeve, TJ McKenzie and the Gold team that used a seventh inning rally to force a Tuesday night showdown for the series win. LaNeve got the scoring started with a long solo shot in the top of the second inning before a four-run seventh put things away for the Gold squad. Gold registered six runs on just seven hits, highlighted by the LaNeve long-ball and a two-run shot from junior TJ McKenzie.

Now-sophomore Christian Little took the hill for the Black team and was opposed by lefty Hunter Owen on the Gold side. The starters boasted nearly identical stat lines with each lasting just over 70 pitches while flashing signs of promise.

Little went four strong innings while allowing just a single earned run. He used his already-patented fastball to notch five strikeouts and was also quite efficient—walking just one batter over his four frames. Little still has work to do in order to become a true No. 1 option, but he is well on his way.

Owen was also impressive. The sophomore appeared in 14 games last year during his freshman season but never in a starting capacity. On Sunday, he took the ball to start and blended a fastball that topped out around 94 mph with occasional breaking balls en route to five strikeouts and no walks.

Out of the bullpen, a slew of youngsters flashed what they might be able to contribute early on this season. Most notably, perhaps, was freshman Devin Futrell—a top-175 recruit according to Perfect Game. The Florida native tossed 2.1 scoreless innings in relief of Owen. Like many Vanderbilt pitchers, he worked quickly and efficiently, using just 27 pitches to strike out three.

On the offensive side, most striking was the power this team potentially boasts from the left side of the plate. While not on the same scrimmage team, southpaws Spencer Jones, Parker Noland and LaNeve combined to go 5-11 on the day. All three found gaps, hit the ball hard and were patient, and in Jones’ and Nolands’ case, even against a fellow lefty in Owen.

In the field, Carter Young looked like his normal self at shortstop, ranging both ways and making tough throws on numerous occasions. He tallied one error—as he couldn’t get the ball out of his glove to throw over to first base—but did look fairly strong despite his late-season shoulder injury just a few months ago.

His potential double-play partner is very much up in the air, however. Javier Vaz got the nod for the Black team while freshman Rob Gordon started at second for the Gold team with Tate Kolwyck over at third base. Kolwyck has moved all over the diamond in the fall, taking repetitions at first base and third base after mostly playing second base last season. The Commodores’ double-play tandem will be a storyline to watch come spring.

With its fall schedule now complete, the VandyBoys will now hit the gym as the winter approaches before gearing up for their season opener on Feb. 18, 2022, against Oklahoma State.