The Commodores took down the No. 10 Tennessee Volunteers in their final home match of the season in an overtime thriller won by Peyton Cutshall. 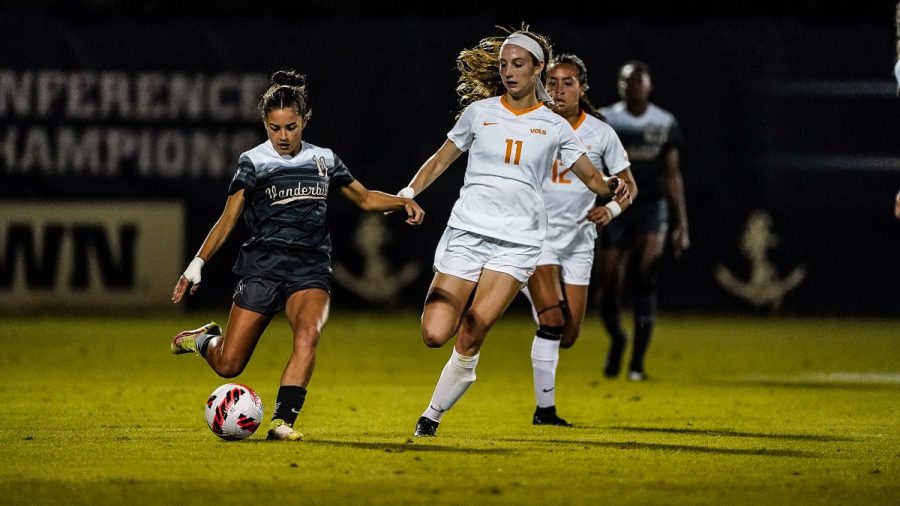 Vanderbilt soccer competing against Tennessee in its home finale on Oct. 21, 2021. (Vanderbilt Athletics)

On a beautiful Thursday evening in Nashville, the Vanderbilt Commodores played their final home game of the season against their in-state rivals, the No. 10 Tennessee Volunteers. The Commodores were able to rebound from a 1-0 road defeat against Ole Miss on Sunday with a dramatic, 2-1 victory over the Volunteers thanks to an overtime goal from Peyton Cutshall, who was left out of the starting lineup.

🔥🔥🔥🔥🔥🔥🔥@pcutshall192 with the game winner over No. 10 Tennessee. #AnchorDown pic.twitter.com/bUo8ivyxvZ

Vanderbilt entered the game in a tie for seventh in the SEC standings, good enough to qualify for the SEC Tournament but one spot shy of a first-round bye. Meanwhile, the Volunteers entered Thursday’s clash second with a conference record of 6-1-0. Despite the win, Vanderbilt will remain in a tie for seventh after Alabama also claimed a victory tonight.

The Commodores were on the back foot early, struggling to get out of their own half in the opening 10 minutes. The Volunteers’ Jaida Thomas had the first clear chance of the game but put it wide of the net. Thomas put the ball in the net just two minutes later, but it was ruled out for offside.

In the 14th minute, after a Commodore break, the hosts were awarded a free kick in a dangerous area, just 20 yards from the goal. Sophomore Amber Nguyen took the kick, and sophomore Abi Brighton scored on the rebound to give Vanderbilt an early lead. Tennessee responded quickly with a couple of quick chances, but sophomore goalkeeper Kate Devine was equal to the task. Devine finished with eight saves on the evening.

“She’s the same every day. Her performance was outstanding, but if you came to practice, I’d tell you the same thing,” head coach Darren Ambrose said of Devine. “That’s not special Kate, that’s normal Kate.”

Later on in the half, Tennessee keeper Lindsey Romig nearly gifted the Commodores a second goal when she was closed down by senior Raegan Kelly, but the ball went wide for a corner. A few minutes later, the Volunteers looked to be through on goal, but Jordan Fusco’s shot was once again saved by Devine. The Commodores were outshot 11-2 in the first half but held onto the lead entering the intermission.

“Tennessee had us on our heels for a while. When you have your back against the wall, you have to have that mentality that comes out swinging, and I thought our kids did that,” Ambrose said.

Early in the second half, Nguyen picked up the game’s first yellow card for a reckless foul at midfield. In the 50th minute amid a scramble in the Commodore penalty area, Tennessee’s MacKenzie George scored the equalizer. Action settled down for the next 20 minutes, with the Commodores playing their way back into the game.

Freshman Quinn Cornog had Vanderbilt’s next shot on target, but it was saved easily by Romig. The Volunteers kept up their pressure though, with another shot by Fusco just sailing over the bar. Devine made a few more saves, with one shot being just touched over the crossbar. Brighton mistimed a slide tackle as time expired, sending the game to overtime.

Overtime started out with chances on both ends before Romig nearly fumbled the ball into her own goal, but escaped with a corner. But on the ensuing set piece, Cutshall found the back of the net with a header to win it for the Commodores.

“What a great moment for two seniors in their last game to beat Tennessee and to be responsible for the assist and the goal, and it couldn’t have happened to two better kids,” Ambrose added, describing the winner, which was assisted by Kelley.

Vanderbilt improves to 4-3-1 in SEC play with the win. Next up on the schedule for Vanderbilt is its penultimate regular-season game, a visit to Texas A&M on Oct. 24.