Junior Joubert Klopper recovered from a couple early losses to win five straight matches on his way to a consolation final victory. 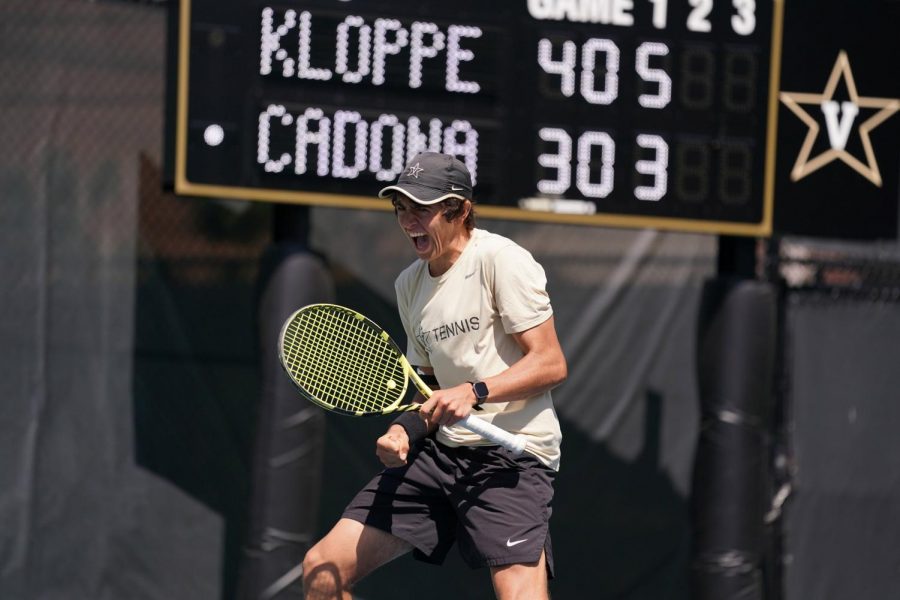 Junior Joubert Klopper led the way with five wins, two alongside doubles partner Connor Robb-Wilcox, as the Commodores came away with nine weekend victories at the Bulldog Invitational (Vanderbilt Athletics).

Vanderbilt junior Joubert Klopper came away with a spectacular early-season performance at the Bulldog Invitational, with his young teammates showing flashes of the talent that give hope for the season ahead.

The Commodores came away with nine match wins on 18 chances, faring slightly better (3-3) in doubles than in singles (6-7).

“I mean, results-wise, it wasn’t great,” head coach Ian Duvenhage said. “We’ve seen sparks of brilliance all the way through the fall, but we’ve got to be executing with more consistency.”

The weekend series began on Friday with seniors George Harwell, Max Freeman, Marcus Ferreira and Macsen Sisam absent from play. The rest of the squad competed in singles and doubles tournament play.

The singles tournament began with a three-set loss (2-6, 6-3, 7-5) for Klopper against Mikhail Sokolovskiy of UNC-Charlotte, knocking him out of the winner’s bracket at the start.

Freshman Michael Ross, however, turned in a solid 7-5, 6-3 victory against Tennessee’s Conor Gannon to stay alive through the first round. Graduate transfer Siim Troost also secured a two-set 7-5, 6-4 victory against Carter Morgan of South Carolina.

The final singles competitor for the Commodores, Connor Robb-Wilcox, retired due to injury in the third set (6-7 (4), 6-2, 2-1) against Richard Trey Mallory of UNC-Wilmington.

“Connor got hurt so he only ended up playing once in singles,” Duvenhage said.

At the end of day one, only the two newcomers to the program, Troost and Ross, survived in the singles winner’s bracket. The two players later competed together in doubles, losing 8-5 to Angel Diaz and Mark Wallner of Tennessee in the first round.

The duo of Klopper and Robb-Wilcox also lost in their first round of doubles, but both came to play on day two. Facing the team of Oren Vasser and Juan Martin Jalif of Miami, the veteran team came away with a dominant 8-2 victory in the consolation bracket.

Troost and Ross nearly redeemed themselves in the doubles bracket, losing 8-6 against the Georgia team of Thomas Paulsell and Erik Grevelius playing on their home court.

“Siim Troost and Michael Ross at times played extremely well in doubles,” Duvenhage said. “They came out against Georgia and spotted them a 4-0 lead, then barely lost 8-6.”

In the quarterfinals of the singles winner’s bracket, both Ross and Troost were eliminated. Ross lost 6-2, 6-3 to Coy Simon of UNC-Charlotte while Troost fell in three sets 7-6 (5), 2-6, 6-3 against Britton Johnston of Georgia.

The action for Vanderbilt during the rest of the tournament took place in the consolation bracket, having been eliminated from both singles and doubles.

Following his consolation doubles win, Klopper defeated Alejandro Quiles of Dartmouth 6-2, 6-3 and took Mark Wallner of Tennessee to 3-2 before Wallner retired. His back-to-back singles victories placed him in the consolation bracket final scheduled for the next day.

The rest of the team struggled in consolation singles on day two, with Robb-Wilcox out due to injury and Troost and Ross both losing their matches in quick succession.

On the final day of the tournament, the Commodores ended on a high note. Troost and Ross defeated Angelo Guerrero and Pablo Schelcher of Georgia Tech 8-3 and Klopper and Robb-Wilcox defeated Reece Falck and Trey Mallory of UNC-Wilmington 8-4.

Klopper took his then four-game winning streak into the consolation final, where he faced Ivan Mitric, a graduate transfer from Furman. Klopper made quick work of Mitric, taking the match 6-2, 6-3 to earn a 5-2 overall record at the Bulldog Invitational.

“I thought Joubert, for the third tournament in a row, had a really good tournament and played well,” Duvenhage said. “He’s continuing to be a real positive for us.”

The team will now look forward to their final matches of the fall season on Oct. 15-17 as the host school of the Commodore Invitational at the Currey Tennis Center. The competition features team play, rather than tournament style, including matchups with Georgia Tech, North Carolina and Memphis.

“I think it’s great for us, we’ll see what we’ve learned from the past three weekends,” Duvenhage said. “It’ll be nice to get our senior players back as well.”