The Vanderbilt head coach met with the media to share his thoughts on the team’s progress and the upcoming game against the Gamecocks. 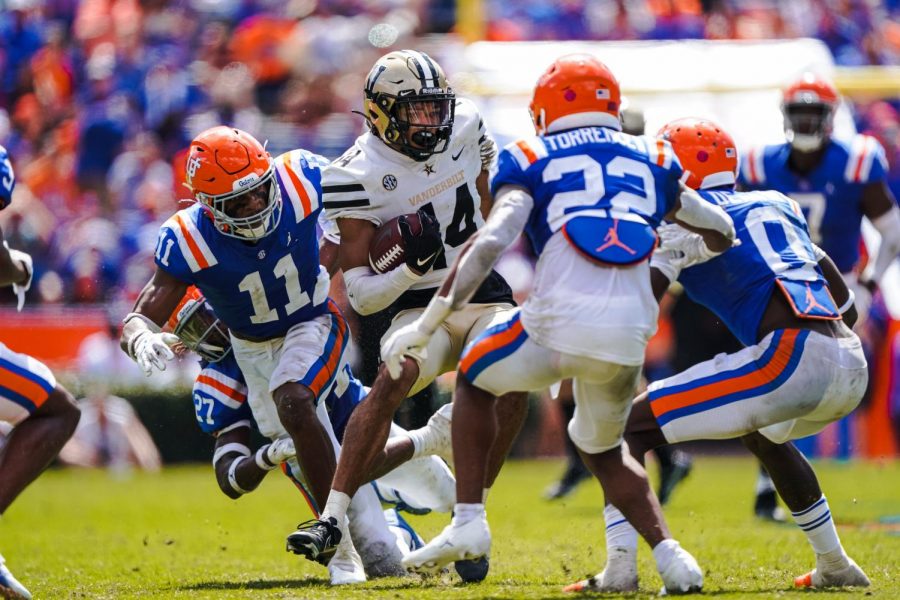 Vanderbilt receiver Will Sheppard runs after a catch against Florida on Oct. 9, 2021. (Vanderbilt Athletics)

Coming off of a crushing 42-0 loss to the No. 20 Florida Gators last week, head coach Clark Lea and his team will look to turn the page on Saturday in a matchup against the 3-3 South Carolina Gamecocks. Lea spoke with the media on Tuesday to share some of his thoughts on the team’s growth and mentality heading into Saturday’s matchup in Columbia.

“This is about us. It’s about Vanderbilt developing an identity and honing that in a competitive environment,” Lea said. “We’re just a work in progress, and I think over the course of the season we’ve seen progress in certain areas. To build, and keep building, the program, you’re looking for the small wins you can accumulate, which we have had.”

Speaking about the tough loss last week, Lea also offered some thoughts on the game and what his team could learn from the defeat moving forward.

“I thought on Saturday we were good in spurts, but obviously good in spurts, in this conference, sets you up for a disappointing result,” Lea said. “Looking at how we can find a more consistent four-quarter approach and be competitive and put ourselves in a position to finish a game off on the road is the challenge.”

As Lea mentioned, there certainly have been bright spots for the Commodores early in the season even amidst some tough losses. For one, the defensive line has stepped up in recent weeks, tallying two sacks and nine tackles for loss against UConn and putting in a strong performance against the Gators. Moving forward, Lea had some comments on how that unit could further their development and build off the strides they have already made.

“We can’t always create that rush by adding blitzers; we have to be able to win our one-on-ones and be able to convert,” Lea said. “Particularly in the play action game, we’re having trouble converting from our run read to our pass rush. I thought Coach [Jesse] Minter and his staff did a good job of creating rush, but on the deep balls that were completed, I thought there was still way too much time in the pocket.”

Another storyline early in the season has been the low usage of x year tight end Ben Bresnahan, who was fourth on the team in receiving yards (300) and second in touchdowns (4) last year for the Commodores. Coming into this Saturday’s matchup, Bresnahan has just 54 yards and no scores.

“We had some shots to him in the UConn plan and I felt good about that. We had one Saturday too where we just overthrew him,” Lea said. “Some of those routes over the middle, it’s just finding him—he’s open at times but it’s just locating and finding him. There’s a number of factors there, but he’s certainly a guy we think can be a featured part of the offense.”

Looking ahead towards Saturday’s game, the Vanderbilt defense has struggled mightily defending the run, currently ranking 112th in the FBS in rushing yards allowed. In their game against Florida last week, the Commodores gave up 181 yards and two touchdowns on the ground. Speaking about South Carolina’s rushing attack, Lea offered some strategies for limiting Gamecocks’ quarterback Luke Doty and his rushing offense.

“It’s about having your numbers in the right places and accounting for the quarterback. He’s certainly athletic enough to move the chains and create scheduled runs. There are similarities here to the style that Florida plays, so we have carry over in that regard. The running back [Kevin Harris] is definitely a dynamic player and someone we have to keep our eyes on,” Lea said.

Lea closed the press conference noting that true freshman lineman Delfin Castillo will again see rotational snaps this week and that he expects running back Rocko Griffin to be available for Saturday’s game.

Vanderbilt will look to put away their early season struggles and right the ship in what should be a competitive matchup.The Commodores and Gamecocks kick off from Williams-Brice Stadium in Columbia at 3 p.m. CDT this Saturday.