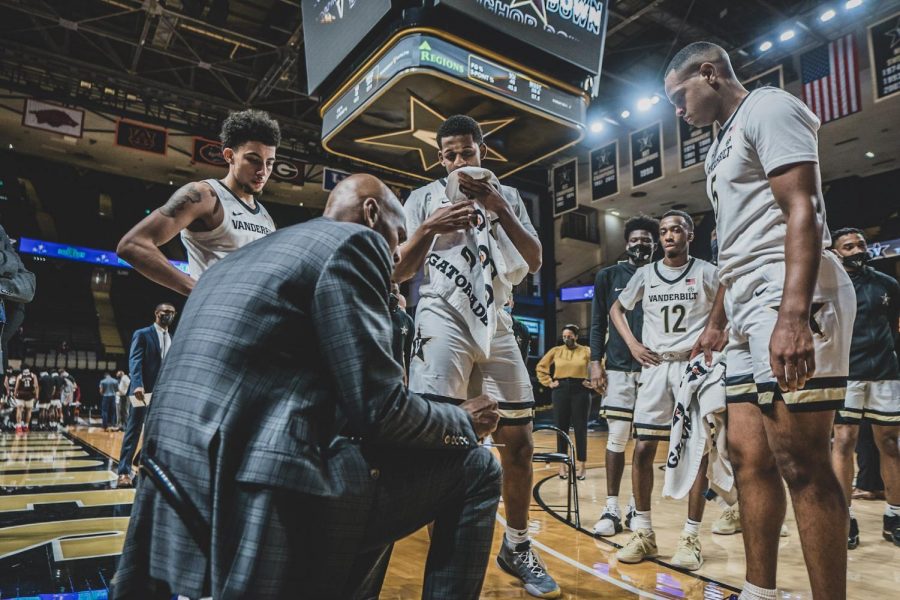 Jerry Stackhouse addresses his team during a timeout in Vanderbilt's 84-81 loss to Mississippi State on Jan. 29. (Hustler Multimedia/Truman McDaniel)

After landing his first pair of four-star recruits back in April, 2021, head coach Jerry Stackhouse has cemented his 2022 class as one of the best in the country thanks to the verbal commitment of forward Colin Smith. The 6’8″ forward from Compass Prep (AZ), committed to Vanderbilt via a post on his Twitter account on Sunday afternoon. Smith chose Vanderbilt over Arizona State, Minnesota and others.

“Thank you to all the programs that recruited me and shared their programs with me but there can only be one!” Smith said in his Twitter post. “With that being said…I am excited to announce that I will be taking my talent to Vanderbilt University.”

Smith, a Dallas, Texas, native is a talented shooter who is capable of playing multiple positions. According to 247Sports, Smith is the 118th-ranked player nationally and the 23rd-ranked power forward in the country. He joins the Commodores’ 2022 class that features four-stars Noah Shelby and Lee Dort and three-star Malik Dia. Shelby and Dort, a package recruiting pull for Stackhouse, committed on April 7 while Dia, a Nashville native, committed to Stackhouse on Sept. 21.

The Commodores’ 2022 class now ranks 17th in the country and third in the SEC according to 247Sports. With four verbal commitments, it is unlikely Stackhouse will look to sign any other players at this time. All four players will be eligible to sign their letters of intent on Nov. 10 when the national early signing period begins.