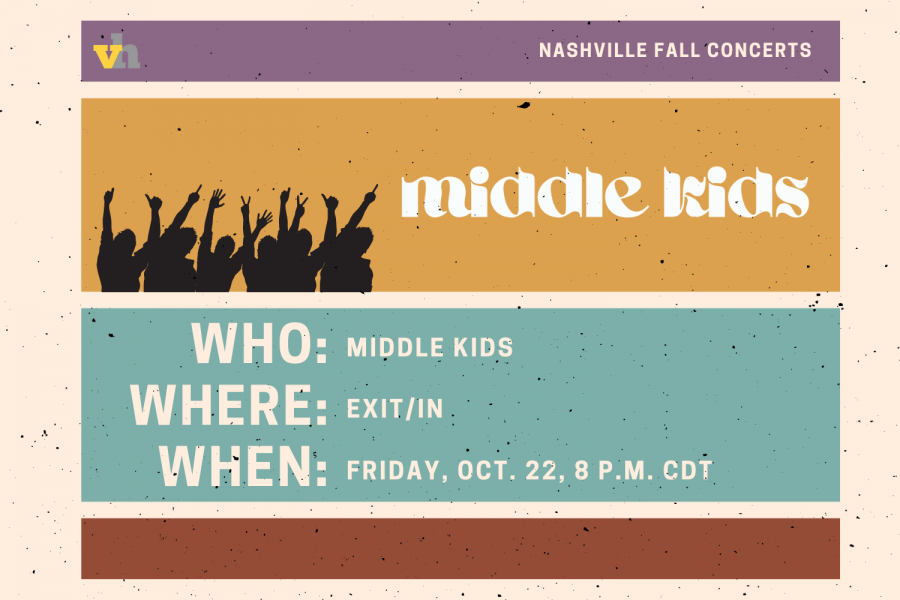 A graphic with preview info for the Middle Kids show.

The band plays at EXIT/IN on the 22nd and it’s not the first time they’ve come to our city, but it certainly marks a new frontier. A lot has changed since their last string of Nashville performances—not just here, but everywhere.

When I spoke with frontwoman Hannah Joy, I asked her whether the band felt in control at this point in their rapid ascent.

“As much control as you have in a global pandemic,” Joy said. Facts.

There have  also been personal changes; throughout the recording of “Today We’re The Greatest,” Joy was pregnant with her second child. This  beautiful new element of her life makes itself just as tangible in the music. Opening track “Bad Neighbors” sees Joy croon intimate reflections of hope, pain and letdowns over a somber acoustic backing. Recording an album during a pregnancy requires an uncanny dedication, and Joy is using it to share a rekindled connection with the things in life that matter most.

But also, she’s low-key a superhero.

It’s no mystery that Middle Kids love music. They’ve been doing it both long and well enough to graduate from the niche indie scenes of Australia, to a global prominence that only seems to get bigger by the day. For as fast-paced as their ascent has been, though, they still also carry a heartwarming love for each other. Joy is married to bandmate Tim Fitz, who plays bass guitar. Drummer Harry Day completes the lineup and rounds out the group dynamics. In one Reddit AMA, the band endearingly reflected on a time Day got food poisoning from a piece of lime pie in Minneapolis.

Come October 22nd at EXIT/IN, the most relevant of the band’s loves will be the one they have for Nashville. Tickets are $17 apiece, and there’s a limit of four per customer. Doors open at 9.

“It’s a really special place for me,” Joy said. “I think it’s such a big melting pot of food, and music, and going out. Whenever I’m there, the energy just feels really vibrant. It’s such a cool place to be.”