Phase four of the Marvel Cinematic Universe is well underway after an excruciating two-year hiatus. What does the MCU have in store for us now? 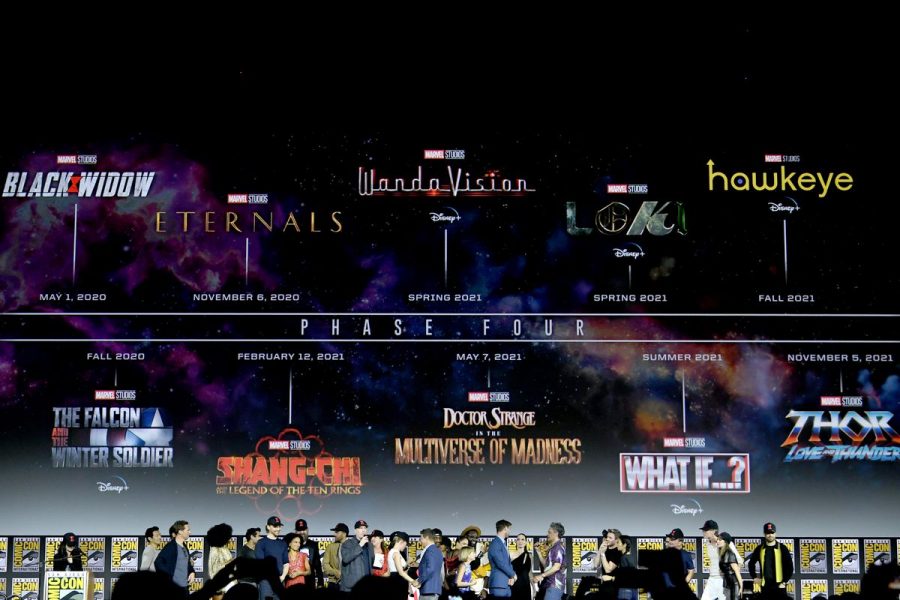 The original Phase Four release schedule seems like a distant dream after all of this year's delays. (Kevin Winter/Getty Images)

Marvel die-hards, assemble: phase four of the Marvel Cinematic Universe (MCU) has officially launched. Since the emotional and turbulent end of “Avengers Endgame,” Marvel fans around the globe have been hungry for more Marvel content. But what exactly does the studio have in store for us now, with two of its most popular, box office breaking heroes out of commission?

2021 marked a great change for the MCU. Not only did we get superhero-centric TV shows that were the first of their kind in the MCU, but the production company also had to find a way to cope with the pandemic-related production problems and the subsequent stark decrease (pun intended) in box office sales.

First, the shows: “WandaVision,” “The Falcon and the Winter Soldier” and “Loki” stunned fans everywhere. They centered around characters hitherto not fully explored in the MCU, connecting them all back to larger overlying plots that differed slightly show-to-show, none of which have been revealed in full. As seen by the first three stages of the MCU—otherwise known as the Infinity Saga—culminating in “Endgame,” Marvel’s writers have an impressive ability to plan out movies and plots well in advance. This begs the question—what’s in the endgame now?

According to Kevin Feige, president of Marvel Studios, the MCU writing team has planned out roughly six years of upcoming movies. With all this on the horizon, let’s break down what we know about the plot of phase four so far. The finales of both “WandaVision” and “Loki” revealed that the MCU is no longer a single universe: it is composed of many! The stories we know and love are not the only superhero sagas in existence. Reinforced by the title of Dr. Strange’s sequel and the recently released trailer for the Spiderman threequel, the next phase is centered around the idea of a non-harmonious multiverse. It is yet to be revealed what exactly our favorite heroes will undergo as they venture into new universes, but it’s sure to be a hell of a ride.

Currently still dropping episodes every week, “What If…?” provides viewers with a little more background as to what these other seemingly nebulous universes might look like. From Peggy Carter becoming a super soldier to the zombification of the Avengers, the show explores many multiversal possibilities, potentially setting the stage for the aftermath of “Loki” and the Strange sequel. While it is yet to be confirmed whether the universes portrayed within the show will be referred to in the main timeline, it has been confirmed that the show does not alter the canon Marvel timeline that we’ve seen in the shows and films.

Curiously, “Shang-Chi and the Legend of the Ten Rings”—the latest box office hit released in early September—did not run with the familiar multiverse theme and was instead more similar to films from previous Marvel phases. Because of this, it felt a little detached from the present timeline, only briefly connecting the new hero to the Blip or any MCU content at all. Nonetheless, the movie has officially topped the box office with the highest second weekend gross revenue during the pandemic: a whopping $35.8 million.

Nevertheless, the movie revealed something significant: with the end of both Iron Man and Captain America, the two most iconic Avengers of the Infinity Saga, there is now a curious power vacuum in the Avengers’ team dynamic. That power dynamic is simply waiting to be filled. The introduction of Shang-Chi and the teasing of other characters—such as Monica Rambeau as Photon—proves the Avengers team is both growing but evolving, yet, this power vacuum remains unfilled. As always, we can only wait to find out what’s next.

Though the future is blurry surrounding many phase four installments, we’re in for a wild ride no matter what. And whatever happens: dear Marvel, I love you 3,000.