Special performances from Amber Nguyen and Maddie Elwell led Vanderbilt to its second SEC victory of the season. 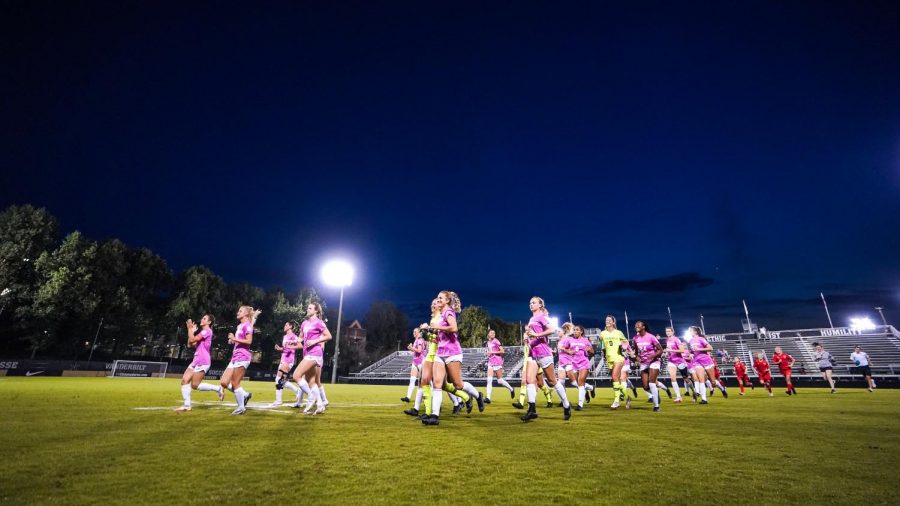 On Friday night, the Vanderbilt soccer team came out with a dominant 5-0 victory over the Missouri Tigers. Following an inconsistent start to their season, the Commodores have now won two straight games in blowout fashion against SEC opponents.

From the opening whistle, the Tigers were relentless in their front-line press, often pinning the Commodores in their own half and causing errant passes. The pressure resulted in an opportunity for Missouri in the fifth minute, when a loose ball was picked up by Tigers’ midfielder Milena Fischer in yards of space in the Vanderbilt half. Fortunately for the Commodores, the ensuing shot from the top of the 18-yard box was caught and saved by keeper Kate Devine.

Along with the press, it was clear from the beginning that Missouri planned to attack the wide areas of the pitch and the Vanderbilt fullbacks. The Tigers’ left winger Leah Selm was used frequently in the first 15 minutes of the match with her efforts culminating in two corner kicks and a great lay-off for striker Julissa Cisnerros who, unfortunately for Missouri, found herself in an offside position.

Vanderbilt’s first chance of the game came in the 25th minute of the match. After winning possession in the midfield, sophomore defender Ava Hetzel played a brilliant through ball to forward Maddie Elwell, who found herself one-on-one with Missouri keeper McKenna Sheehan. Elwell controlled the ball well at the top of the box and shot to the near post, but it was smothered by Sheehan who did well to close the space between herself and the Commodore forward.

Following Elwell’s shot on net, chances began to pile up for the Commodores as they started to settle in and break the Missouri press consistently. The most threatening of these chances was created by sophomore Amber Nguyen in the 30th minute when she beat Missouri’s defense down the right wing and delivered a beautiful cross into the box. Fortunately for the Tigers, the ball skipped harmlessly through the box and was not met by any Vanderbilt forwards.

Persistence, however, paid off for Nguyen, who assisted Vanderbilt’s first goal soon after in the 32nd minute. Nguyen received the ball on a counter attack and sprinted down the right wing. This time, she targeted Commodore forward Alex Kerr, who was approaching the top of the box, with an early pass. The pass fell behind Kerr, again floating through the Tigers’ 18-yard box. This time, however, the loose ball was met by Elwell, who delivered a brilliant strike across the keeper and into the bottom right corner to put the Commodores ahead 1-0.

From there, Vanderbilt began to seize control of the game. Nguyen consistently put pressure on the Tigers’ right wing and linked up frequently with captain Raegan Kelley to orchestrate attacking movements. This pressure finally resulted in the Commodores second goal of the game, which came in the 40th minute. Following a cross from Nguyen, the ball popped up and landed at the feet of forward Kerr at the top of the box. With an ingenious touch, Kerr floated the ball over the Missouri centerbacks and to the feet of Kelly, who converted the chance clinically, extending Vanderbilt’s lead to 2-0 heading into halftime.

The Commodores came out of the break and picked up exactly where they left off, scoring in the first minute of the second frame. A long throw-in from Hetzel met substitute Quinn Cornog in the box, who headed the cross towards the front of the goal. After a brief scramble, Cornog found the ball at her feet and squared it away to Nguyen, who calmly put the ball in the net at the near post. Nguyen was relentless all night in creating chances for Vanderbilt and was finally rewarded with a goal.

With a commanding lead, the Commodores began to push their defensive line further back and play on the counter attack. This tactic allowed Vanderbilt to pick up its fourth goal in the 57th minute. After picking up a ball in her own half, Kelley played a through ball on the left flank to Elwell, who did well to keep the ball in play and began sprinting down the sideline. Elwell then sent an early cross into the box, finding Kerr who had beat her defender down the middle of the pitch. Kerr put the ball past the keeper to push Vanderbilt’s advantage to four. From her pace in advancing the ball down the field to her wonderful delivery to Kerr, Elwell’s full skillset was on display for this score.

Following a defensive stand in the 74th minute, the Commodores went on the counter. This ended in a foul, drawn by Peyton Cutshall, just outside the Tigers’ box. The ensuing free kick was whipped in by senior Ella Shamburger, whose shot struck the crossbar and deflected towards the top of the box. The rebound was then possessed by Commodore forward Tina Bruni, who struck a low-driven shot into the bottom left corner of the net and put the finishing touches on a 5-0 Vanderbilt win.

The final minutes of the game had few chances for either side as Vanderbilt looked to keep possession and run out the clock.

Following two impressive victories, the Commodores will look to keep their form heading into their next match against Kentucky on Thursday, Oct. 7, at 6:30 p.m. CDT.