Vanderbilt Football Mailbag: Is the time Wright for a quarterback change?

Sports Editor Justin Hershey and Deputy Sports Editor Bryce Smith answer all your questions about the Commodores a month into the season, including a potential changing of the guard under center. 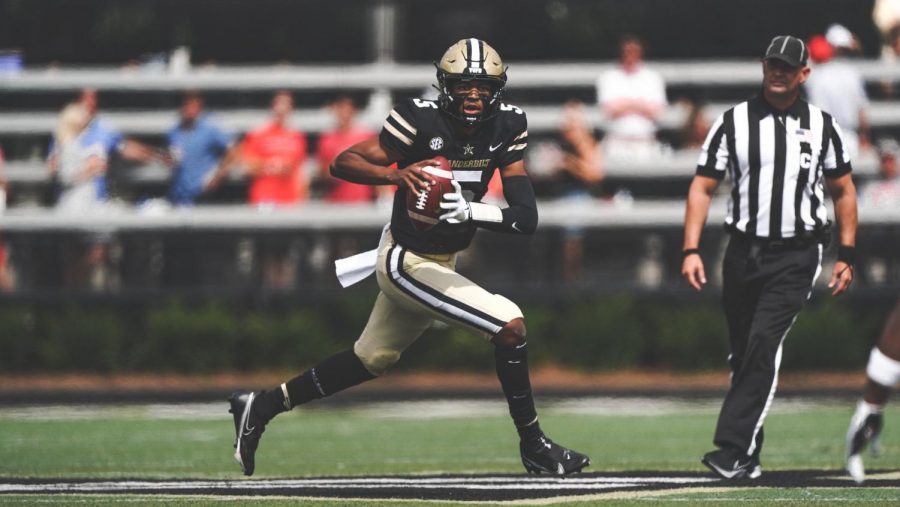 Is it time to see Mike Wright start under center? (Vanderbilt Athletics) .

It’s now been four weeks of Vanderbilt football in 2021 and to say that the ride has been anything less than turbulent thus far would be, well, generous. The Clark Lea era kicked off with a stunning loss to FCS opponent East Tennessee State University (ETSU) in Week 1. Lea and the Commodores then bounced back for a dramatic comeback win on the road at Colorado State, before back-to-back blowout home losses at the hands of Stanford and Georgia.

Now sitting at 1-3 on the campaign, Vanderbilt will welcome UConn this weekend for the first time since 2002. So how do our writers feel about the pulse of the Commodores a month into Clark Lea’s first season? What are the biggest questions this week and beyond?
At what point does Vanderbilt give Mike Wright an opportunity to start at quarterback?
Bryce Smith, Deputy Sports Editor: I’m conflicted on this one. On one hand, I have been as big of an advocate for Mike Wright as anyone on the Hustler staff since he’s been on campus. He brings an element of dynamic speed and game-changing ability that Ken Seals simply cannot provide. Against Georgia he actually gave Vanderbilt a chance to move the ball at some points, unlike Seals who was completely helpless behind the Commodore offensive line. But on the other hand, Seals was pretty darn good against Colorado State after he was able to develop some rhythm by taking his lumps in the first half. He followed that up with a (mostly) solid first half performance against Stanford. Point being—he’s probably not the Commodores biggest issue at this point and clearly needs time within the game flow to get comfortable. I’m not sure how I feel about it yet. Justin, can you convince me one way or another?

Justin Hershey, Sports Editor: I would be lying if I said I wasn’t conflicted here, too, but I’m going to continue rolling with Seals. In three games played, Wright is just 9-21 for 88 yards through the air. The limitation he provides in the passing game is just too much to overcome. You can throw the Lynn Bowden Jr. argument at me but there is a big difference here at Vanderbilt. The Commodores’ best players on the team may be the wide receivers. Not only are they the veterans, but they are also the biggest playmakers on either side of the ball. So to run an option-heavy, quarterback draw type of offense just doesn’t make sense for this team. Even besides the fact that this offensive line has struggled, wasting Vanderbilt’s wide receiver talent because its quarterback can’t quite get them the ball properly would be a grave mistake. Lea did clarify on Tuesday that Seals has been inconsistent. There is no doubt about that. But when he is on and poised, he is the better quarterback.

BS: Pretty much agree with you there. Seals feels like the higher floor option, but one thing I’ve come back to is Wright’s shoulder injury in the opener against ETSU. Can we really hold Wright’s passing numbers against him with this in mind? I understand that Georgia is a defense that would have given most quarterbacks trouble, but Seals looked like a JV starter going up against the No. 1 team in the state on Saturday against the Bulldogs. Some of his decision making has still been shaky (see: second quarter interception against Stanford) and I’m just not sure how much he elevates the Commodore offense as a whole. That said, I think that I’m in agreement that he should be given the starting nod moving forward, at least against UConn. Not utilizing this talented receiving group is just something Vanderbilt can’t afford to do right now and Seals probably gives you a better chance at avoiding that.
What adjustments does Vanderbilt’s offense need to make?
JH: We received quite a few questions about the offensive struggles that this team has encountered, so we are going to boil them down into one massive, perhaps impossible, question to answer. First of all, we can’t base much of our offensive discussion on this past weekend because there simply was no offense to base discussion off of. But in general, this offense has limitations. While there are playmakers on the outside, the offensive line has struggled to offer much more than a couple seconds of protection for Seals and Wright. But one thing I think can ease some of the pressure on this offensive line is putting Seals in motion a bit more. The sophomore showed many times last year that he is capable of throwing on the move—even to the point of thriving. I think back to my first impression of him, last year’s opening game against Texas A&M, and many of his throws were on the move. I really think that’s a part of his game that this staff has disregarded. Joey Lynch and David Raih also need to make things easier for their play-callers by using more screens. Cam Johnson is a textbook screen guy and they are asking him to run downfield far too much.

BS: Rolling out and making throws easier for the quarterback is never a bad idea, Justin. It’s something I would like my Chicago Bears to do a bit more with Justin Fields under center, but that’s a conversation for another day. Besides getting Seals on the move and letting him show his talent for throwing on the run, I think that Vanderbilt needs to continue to show a commitment to the run. As you mentioned, the run game—and entire offense—was pretty useless against Georgia, but I actually thought the Commodores moved the ball on the ground well against both Colorado State and Stanford, and Rocko Griffin and Patrick Smith have both shown flashes through the first couple of weeks. Further, UConn is probably the only team left on the schedule that Vanderbilt is going to have a size advantage against upfront, so attempting to establish the run is going to be huge. As we’ve mentioned, Seals operates better in comfortable situations, so utilizing the run game to get some shorter second and third downs should in theory unlock the passing game as well. This is another area that is obviously never a bad idea either, but I guess my point is that Vanderbilt shouldn’t get discouraged by their performance in this regard against Georgia because they were actually executing well here over the previous few weeks.

JH: While tough considering Re’Mahn Davis’ injury, staying committed to the run is essential for this team. Right now, the Commodores have nearly a 50/50 run-to-pass split. That definitely needs to remain the same. As we are going to get into later, this season is all about growth. And while that is frustrating—especially for me as a senior who will be leaving campus soon—there are chances for real development on this roster and running back is one spot for it. Getting Smith and Griffin plenty of snaps is necessary by default, but hopefully it doesn’t deter Lea and the staff from staying committed to the ground game.
How has Clark Lea performed relative to your preseason expectations so far?
BS: Slightly worse? I think that some of this can be chalked up to August Syndrome and the two of us hyping ourselves up about the possibility of a competitive football team, but still I wouldn’t say that Lea and co. have met my expectations thus far. The loss to ETSU is a big part of this and the absolute thumping against Georgia leaves a sour taste in the mouth to boot. We knew Year 1 was going to be rough, but a loss to an FCS team and a 62-0 loss at home certainly don’t qualify as meeting or exceeding expectations that I had. Then again, it’s hard to tell exactly how much of that is due to Lea’s inability to coach and how much is due to the obvious talent gap left in place by former coach Derek Mason. How the team fares against UConn will play a big part in this as well, so I guess I’ll give Lea more of an incomplete grade for now. Thoughts?

JH: It’s been underwhelming. I was hoping to not be this underwhelmed. But in hindsight, maybe myself and Vanderbilt fans should have predicted this. This roster lacks completeness in a lot of areas. But what I was hoping to see was more discipline, energy and passion. Lea talked about his own displeasure with the sideline energy during his Tuesday media availability and I’m glad that he pointed that out. He really has said the right things throughout this whole season despite it being a roller coaster set of contests. Where I want to continue gauging success is in the guts of the SEC schedule. Can he keep control of this locker room to the point where they are scoring second-half touchdowns against Mississippi State or South Carolina or Missouri? There are winnable—or at least competitive—games left on this schedule and I am ready to see if Lea can erase the 26-point loss margin this program has had against SEC competition the past 13 games. We all knew that the Georgia game may get ugly, but I want to see what other SEC games he is able to keep from getting to that point.