With exceptional play from captain Raegan Kelley and sophomore Amber Nguyen, the Commodores rolled past Alabama to pick up their first SEC victory of the season. 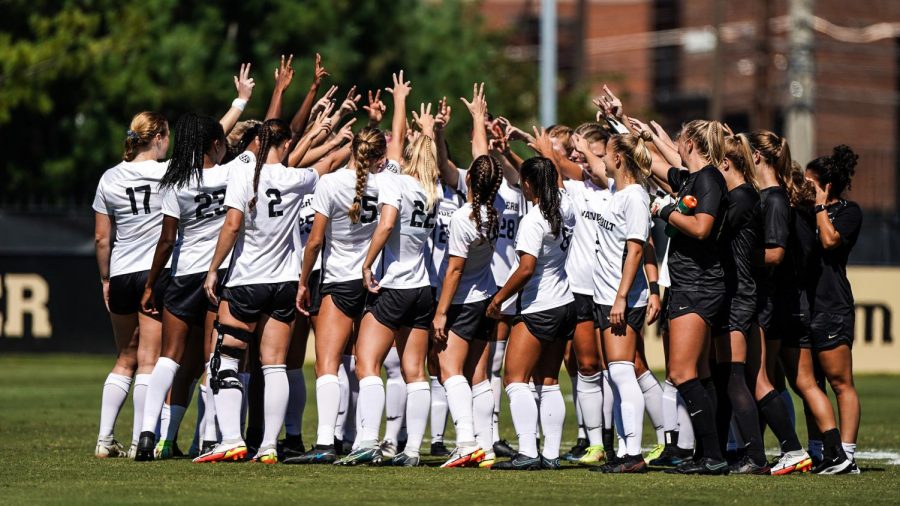 On a picture-perfect Sunday, Vanderbilt soccer took down the Alabama Crimson Tide (6-6) 3-0. Both sides came into the day having up-and-down seasons, but the Commodores pulled out a much-needed victory to secure their first SEC win of the year. Away games are clearly the Achilles’ heel for this Alabama squad, as they are now 0-4 outside of Tuscaloosa but 6-2 in it.

The day started with early Commodore pressure as the team tested keeper McKinley Crone with crosses into the box and through balls past the back line. They couldn’t find a breakthrough from the run of play though, so they turned to set pieces. In the 15th minute, sophomore Amber Nguyen tallied her first assist of the day by serving a tempting ball to the top of the six-yard box, where senior forward Peyton Cutshall headed in her third goal of the season.

For the Commodores, scoring first and early was a key to winning.

“[In the past] we’ve generated chances but haven’t scored, missed a couple, and then we make a mistake, and we’re behind. And chasing the game is different,” head coach Darren Ambrose said. “I think [the goal] took some pressure off and put them at ease and allowed us to play.”

However, Alabama would not go quietly. At the end of the first half, the Crimson Tide jeopardized the Commodores’ lead with ambitious crosses and shots that led to a plethora of dangerous corners. Overall, the Tide had eight corners and ten shots with five on target to Vanderbilt’s five corners and five shots with four on goal. However, the stat line is slightly misleading, as the home side limited Alabama’s quality chances and made the clean sheet a reality.

In the second half, Vanderbilt captain Raegan Kelley shined. With some tactical changes, the Commodores came out of the locker room ready, and the senior quickly went to work, doubling her squad’s advantage 5 1/2 minutes into the period. The goal came from a low and driven Maddie Elwell cross from the left-side baseline to the near post, where Kelley pushed her way past a defender to slide the ball into the back of the net.

A few ticks later, Kelley scored a jaw-dropping brace. In the 53rd minute, Nguyen—picking up her second assist of the game—played a beautiful, lofted ball into the box, where Kelley looked it in over her shoulder and struck with a one-touch volley over Crone’s head. The score was not only highlight-worthy, but a seal for the day, as the Tide weren’t able to overcome a three-goal deficit.

“Super captain, heart and soul of the team: Raegan Kelley. That kid doesn’t lose well, and every time she leaves the field, she is covered in dirt and blood and sweat, and she’s a great role model for our younger kids and what it takes to win,” Ambrose said. “And we know Raegan, when she gets in dangerous positions, she generally finds a way, and I have so much respect for Raegan and how she plays. She’s the leader of the group, and today she showed why, so I’m really happy for her.”

He was equally complimentary of Nguyen, who made an impact from the wings all day long.

“She’s composed. She’s quick. She’s got great vision. And we want the ball at that kid’s feet because when she has the ball at her feet, she makes good decisions,” Ambrose said of Nguyen. “She’s becoming a bigger part of our team which is just [about] maturity.”

With a substantial lead in hand, the Commodores took control of the game. They kept the ball well, controlled the tempo, created promising chances, and played sound defensively, suffocating the Tide as they got into the Vanderbilt final third and keeping goalie Kate Devine’s job easy. They earned the shutout and impressed Ambrose.

“I think they followed a game plan. We really didn’t want to let Alabama get a ball from side to side. If they got it out on this flank, we didn’t want them to be able to get it on that flank where they have numbers up, and they’re really good at that. So, what we told our kids is if it comes out to the right, then they have to finish the attack on the right,” Ambrose said. “I thought they did a terrific job of [limiting Alabama’s side-to-side movement].”

For Vanderbilt, the magnitude of this victory shouldn’t be understated. The team has struggled with earning simple wins this season, and doing so in SEC play is essential if they want to compete in the postseason.

With this victory in their pocket, the squad will look to sustain their momentum and beat Missouri, who they will play this Friday, Oct. 1, in Nashville at 7 p.m. CDT.